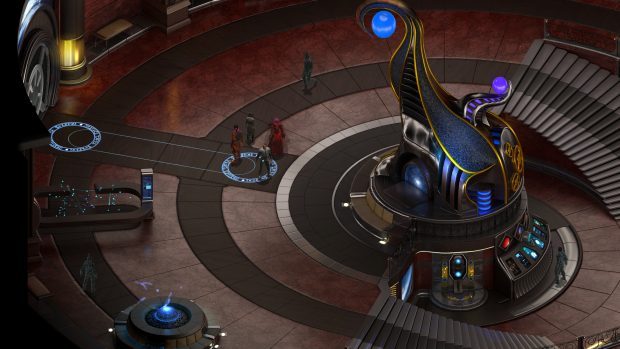 When it first launched on Kickstarter, Torment: Tides of Numenera seemed like a dream come true. A spiritual successor to the innovative 90’s PC RPG Planescape Torment, set in a new universe created by Dungeons and Dragons veteran Monte Cook, with a team made up of Obsidian and Interplay alumni, the game broke a million dollars in seven hours. With that much pressure, anything less than perfection would be a huge disappointment. Now, after three years in development, Torment is finally out, and it’s managed to completely live up to the insane expectations that come with its pedigree.

You begin Torment: Tides of Numenera in a way similar to most RPGs: with no memories and in the middle of great danger. While amnesia in RPGs, and in games as a whole, has become the standard cliche for any game with that uses a mystery as a central premise, Torment manages to bring new life to the standard trope with one major twist. Rather than losing your memories, you have none because your life has just begun. You play as the Last Castoff, one of many vessels of the Changing God, an immortal being whose longevity is credited to his ability to create and transfer his consciousness into new bodies. In this case, he’s been forced to jettison you, his most recent body, out the of a spaceship to lose the trail of an ancient enemy only known as “The Sorrow,” who in turn comes after the Last Castoff.

The Sorrow is shrouded in mystery and shadows for most of the game, and it’ll easy beat you in a fight.

Just like that, the player falls out of the sky and into the world of Numenera. While you have a guide to help you along the way, Numenera is an alien world that’s as strange as it is beautiful. It’s a futuristic Earth, but one that’s seen the rise and fall of nine civilizations, our current one included, and as a result is completely unrecognizable. The planet is littered with strange devices, trinkets, creatures and architecture that form the titular numenera: devices so ancient and advanced that they’re functionally magical. Discovering what the numenera do is one of the most fun parts of gameplay. Are these floating pyramids a weapon? Some form of memory storage device? Only through experimentation will you find out, and the uncertainty of what each one does means that, no matter how much time you spend on Numenera, the land will always be alien to you.

The unconventional protagonist and strange world provide the perfect setting for the Torment to follow its bizarre story. Torment isn’t about saving the world; it’s not even really about saving yourself, though The Sorrow does drive the plot. Instead, it’s a game about how you want to make your way in the world, and what you think your life is worth. Rather than a grand heroic journey, Torment starts with a relatively banal goal. There is a piece of machinery you know you need, and it’s broken, so you’ll need to fix it. How you do so, and who you take with you in your journey, is up to you. Torment is a game that is built around giving you as many choices as possible, and as such, the story branches off quite early on. Within the first half hour, you’re asked to pick which of two philosophically opposed party members you want to go with, and this is a choice that significantly changes the events that follow. Choice is no illusion here, and most players are going to end up with very different game experiences.

Numenera is beautifully realized, and full of strange creatures.

At this point, the parallels to Planescape: Torment are abundantly clear. Both feature a nameless, amnesiac protagonist who’s damn near impossible to kill, being pursued a shadowy beast whose origins and true goals are shrouded in mystery through a world nothing like ours, both have a story that asks the player a philosophical question and challenges them to find there own answer, and both have the word Torment in their name. However, while the connections are undeniable, Torment: Tides of Numenera makes a lot of significant changes to the formula. For one, character creation has been significantly streamlined, though it still feels like an RPG rather than an adventure game with RPG elements. Rather than a massive character sheet to fill, you instead go through a brief introduction that determines your class and modifier, which form the base of your character. You can reroll if you want, but I found the system of character creation, where you pick through a few leftover memories from your body’s previous owner and decide what you would do in those situations, a fun and easy way to make what’s normally the most tedious part of RPGs a little more tolerable.

Another change from Planescape and other classic RPGs is the morality system. While most games that employ a morality system force the player to pick from one or two diametrically opposed moralities (E.G. Good vs. Evil, Law vs. Chaos), Torment: Tides of Numenera has five “Tides,” none of which are explicitly opposed or even all that evil. Certain actions change the way that the tides influence you, and, as a result, the world around you. For example, solving a complex puzzle will raise the Blue Tide, which represents intellect, whereas convincing a local cult you’re their god come back to judge them will raise the Silver Tide, which represents power and ambition. It’s a fresh take on a relatively stale gameplay system, and it results in a game that doesn’t ever feel like it’s judging your actions, allowing for whatever you want to do and forcing you to deal with the consequences.

Combat is the easily the weakest part of Torment

If I have one complaint about the game, it’s that combat just isn’t very fun. While the majority of the game is geared towards dialogue and solving puzzles based around logic and lateral thinking, there is still the chance that things can come to blows. Whenever there is a threat of physical violence, you go into crisis mode, where the game becomes turn based. Each turn you’re allowed one move and one action, which ranges from attacking to talking to using a nearby device. This mode of gameplay has some scenarios where it works, but other times, it just falls flat. Generally, it will activate just before a situation becomes hostile, and acts as a visual indicator that you have only so many turns to deescalate the situation through nonviolent means before the fighting starts, but sometimes it’s just a sign that you’ve been thrown into combat. When the weapons are finally drawn, however, there’s no real strategy to most of the fights, as combat uses the same “X percent chance to failure unless you spend points from your resource pool” mechanic as investigating items or persuading characters. As a result, combat never feels like a valid strategy, instead, it’s a last resort, something to do when you’ve screwed up all your other options. While I suspect that may have been part of the point, given that the narrative of the game, it’s still a disappointment in what’s otherwise a near perfect game.

Torment: Tides of Numenera is a modern take on classic computer RPGs that tells an engrossing and original story, meditating on complex themes of identity in a strange world that just begs to be explored. While the combat seems a bit forced and uninspired, it doesn’t detract too much from the rest of the experience, and as a result I cannot recommend it highly enough.