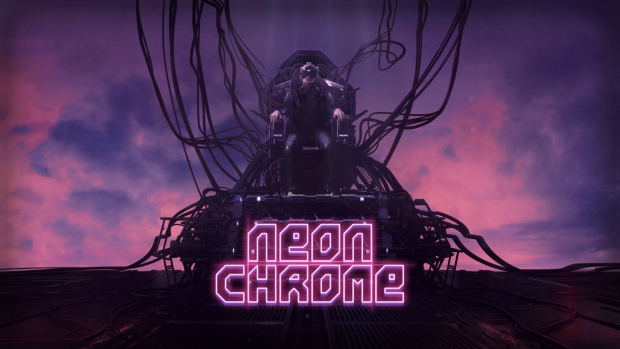 Neon Chrome feels like what might happen if classic cinematic masterpiece Blade Runner and isometric gorefest Crusader: No Remorse met up, fell in love, and had a top-down shooter baby. It’s not always perfect, but it scratches a very particular cyberpunk itch.

Playing as a nameless character, you find yourself quickly squaring off against an impossible amount of powerful enemies as you navigate the brief tutorial. Fight as you may, you die a horrible death. Matrix-like, you disconnect from the meat-sack analogs called “assets” and the real adventure begins. Living in a skyscraper called an “arcology” (it reminds me of a Megablock in Judge Dredd’s Mega City 1), your character finds himself squarely in the crosshairs of the Overseer. The Overseer lives at the top of the Arcology and fully intends to crush the life out of you. Fielding an endless set of assets, you plan to return the favor.

At its brightly-colored core, Neon Chrome is a top-down twin-stick shooter with a handful of RPG elements. Taking place over thirty-one levels, your character will jack into cyberspace and then pick from three faceless assets with unique skills to square off against a deluge of cybernetic, robotic, and human foes looking to impede your climb up the tower.

Top-down shooters aren’t new. We’ve had some great examples of the genre lately, with games like Enter the Gungeon, and Hotline Miami 1 and 2. All of those games have one thing that pushed me away before I finished them, though — they are all instant death. The challenge comes from memorization, pattern recognition, and a healthy dose of luck. I prefer building a character, evolving them over time, and then obliterating my foes. That’s where the RPG elements of Neon Chrome pulled me in.

Upgrading your gear is crucial to your next body’s survival

The RPG mechanics come in the form of choices for the various assets you’ll embody. With names one degree off from Gibson novel characters (e.g. Keven Case) each asset has a primary weapon attack, as well as a powerful secondary weapon. Statistically, they’re similar, but as you earn credits and uncover hidden gear, you can upgrade damage, health, energy, and additional upgrade slots. You can also upgrade your existing gear if you are so inclined. The upgrades are augmentations such as “Duramax Bone Lacing” which adds 15% to your health, and an additional 50% to melee damage, as an example. These upgrades, like the assets themselves, are entirely random.

As a point of fact, the entire game is randomized. Using procedurally generated levels, Neon Chrome looks to create a unique level set every time you play. This works well, to some degree, as it does keep the layout fresh. It’s actually the individual pieces that are assembled programmatically that let the game down a little bit.

Much like Hotline Miami, there are some surfaces you can blow through with bullets or hammer down with melee attacks. Since these are randomized, they occasionally generate in strange ways that result in levels where your foes can cut you to ribbons before you can even see them. On the other hand, some levels are such a cakewalk due to tight corridors and easy enemies that you wonder if the game is simply giving you a breather.

To further differentiate your assets, the game also randomizes their class. Assassins, Soldiers, Hackers, Cyber Psychos, and more all have different powers and advantages that can unlock various paths or solve the fairly straightforward puzzles. Since they are indeed random, it’s a crapshoot whether you’ve got the right character when you need it. Thankfully, most of the upgrades and augments are persistent between assets, and there’s little penalty to picking up a meat puppet you don’t connect with — they won’t be alive long anyway.

Bots and baddies will stalk your every step

Speaking of dying, plan to do so. Frequently. Each tier of the building has a boss fight. Defeating that boss will unlock an elevator that’ll let you skip forward past that vanquished boss. It took me 22 deaths to finally kill off the first boss. It’ll take me quite a few more to beat the game. That uncovers a gameplay element that may or may not fit into your playstyle — while you survive longer than you would in other top-down twin-stick shooters, you’ll be grinding out credits and deaths quite a bit to proceed through the levels. Couple that to the randomness that can swing wildly between cakewalk and physically painful, and it puts a little stress on the roguelike elements.

Up to four players can play cooperatively, which is where Neon Chrome really shines. There are very few couch co-op games on the market, and this simple element elevates Neon Chrome beyond its minor quibbles. The old school Gauntlet-esque cooperative challenge, teamed up with the candy-colored graphics, make for a fun romp through the arcology. Each set of levels ends in a boss fight, pressing further teamwork, and justifying the upgrades more than the wandering mobs you’ll encounter.

Literally everything in this game is trying to kill you.

I am normally a mouse and keyboard player, so I started there with Neon Chrome. After a short while I was frustrated with the slow drag of the mouse reticle for aiming. Switching to an Xbox 360 controller, I was able to control my assets more reliably. I recommend a controller here.

Neon Chrome makes good use of the cyberpunk setting, but remains light on story. While the grind is real, the game shows real promise in couch cooperative play. If twin-stick shooters are your thing, you could do much worse than Neon Chrome.

Ron Burke is the Editor in Chief for Gaming Trend. Currently living in Fort Worth, Texas, Ron is an old-school gamer who enjoys CRPGs, action/adventure, platformers, music games, and has recently gotten into tabletop gaming. Ron is also a fourth degree black belt, with a Master's rank in Matsumura Seito Shōrin-ryū, Moo Duk Kwan Tang Soo Do, Universal Tang Soo Do Alliance, and International Tang Soo Do Federation. He also holds ranks in several other styles in his search to be a well-rounded fighter. Ron has been married to Gaming Trend Editor, Laura Burke, for 21 years. They have three dogs - Pazuzu (Irish Terrier), Atë, and Calliope (both Australian Kelpie/Pit Bull mixes).
Related Articles: Neon Chrome
Share
Tweet
Share
Submit