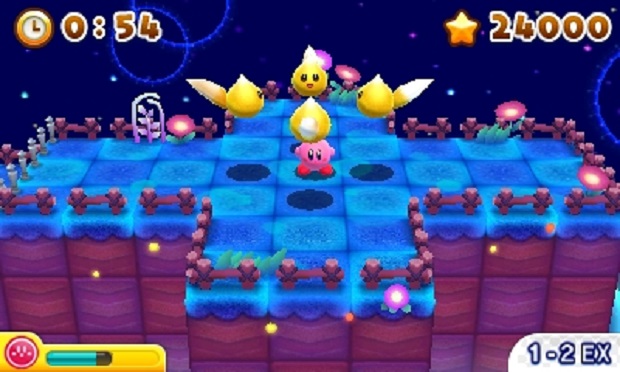 Sub-games have been a staple of the Kirby series ever since 1993’s Kirby’s Adventure. When you get a Kirby game, even a spin-off, you’re expected to receive some sort of crazy mini-game to earn lives or pass the time. When Kirby’s Triple Deluxe was released on the 3DS in 2014, the sub-games surpassed our expectations with Kirby Fighters and Dedede’s Drum Dash. Over time, both of these games received “deluxe” counterparts on the eShop, so when Kirby Planet Robobot was released, fans expected Team Kirby Clash and Kirby 3D Blast to receive the same treatment. Fan expectations were beyond met when HAL gave us the free-to-start Team Kirby Clash Deluxe and the fairly cheap Kirby’s Blowout Blast.

Unlike its free-to-start counterpart, Kirby’s Blowout Blast does not feature a stamina bar for you to wait to play levels. It does not offer in-game currency you can purchase with real money, nor is it a test of patience vs. a burning wallet. The entire game of Kirby’s Blowout Blast is made available through a single $6.99 purchase. But is that worth the price of the upgraded sub-game?

Quite simply, Kirby’s Blowout Blast is a unique experiment in the Kirby franchise. Kirby moves along a 3D plane, jumping over obstacles and inhaling enemies to spit out at other enemies. When you inhale an enemy, you are giving a reticle to show where Kirby is aiming. These levels aren’t typical walks in the park: you’re given a bronze, silver, gold, or platinum medal depending on how well you do and if you meet certain criteria such as not taking damage, killing all of the enemies, collecting all of the coins, and finishing the level quickly.

…all the way down to its length. Kirby’s Blowout Blast is an incredibly short game. There are 5 main levels, each with 4-5 stages in them that last at most a few minutes. The final stage in each of the levels is a boss, which are based on their Kirby’s Dreamland counterparts. And while these bosses are fun, there is unfortunately a short supply of them.

As if having only 5 levels was bad enough,Kirby’s Blowout Blast doesn’t even feature all of the bosses that Kirby’s Dreamland had. Instead of having Whispy Woods and Kabula, Lololo and Kracko’s midboss forms are given boss treatments for the first two worlds, leaving you with only a few different bosses in total.

While you can rush to the end of the game in less than a few hours, as I managed to in just two, the game’s shining moment is in replaying the levels to beat your scores. Earning Gold medals in all of the stages in a level rewards you with an EX version of that level: a harder version with powered up enemies, half health and difficult medal goals.

The difficulty lies in trying to earn a platinum medal. Not only do you have to be perfect in racing through the stage and avoiding damage, you have to be creative with chaining enemies. It took me an entire hour to finally get a platinum on EX1-1 alone, but doing so fills you (and Kirby) with an immense sense of satisfaction.

What isn’t satisfying, however, and is perhaps the most disappointing aspect of Kirby’s Blowout Blast, is the lack of surprises. Team Kirby Clash Deluxe had a large cast of bosses to fight as well as some returning bosses we weren’t expecting to battle. The final boss of Kirby’s Blowout Blast is… exactly what you’d expect. There aren’t really any surprises, and that makes the whole thing feel empty in the end. Queen Sectonia’s troops appear in the EX levels, but no one from Triple Deluxe appears besides them. Kirby’s Adventure’s title theme is the title theme of this game, leaving us with a slight hope that Nightmare would make a surprise appearance, but there are no other Kirby’s Adventure references either.

The pricing for Kirby’s Blowout Blast is comparable to Dedede’s Drum Dash Deluxe and Kirby Fighters Deluxe. While the amount of content available justifies the price, and aiming for platinum on every level is a challenge, I can’t help but feel like there could have been more.

Kirby’s Blowout Blast is a fun, short distraction that acts as a pseudo-retelling of Kirby’s Dreamland. The levels are short, there aren’t a large variety of bosses, and there is a notable lack of surprises, but replaying levels to earn a platinum level, or even just ace your score, is what makes this game almost worth the $6.99 purchase.

Sean Anthony likes to combine two of his passions: gaming and writing. Gaming has been a huge part of his life ever since he played his first game as a child, Kirby's Adventure. He aspires to have his name attached to an article that makes the whole world go, "Huh, that's neat, I guess."
Related Articles: Kirby's Blowout Blast
Share
Tweet
Share
Submit