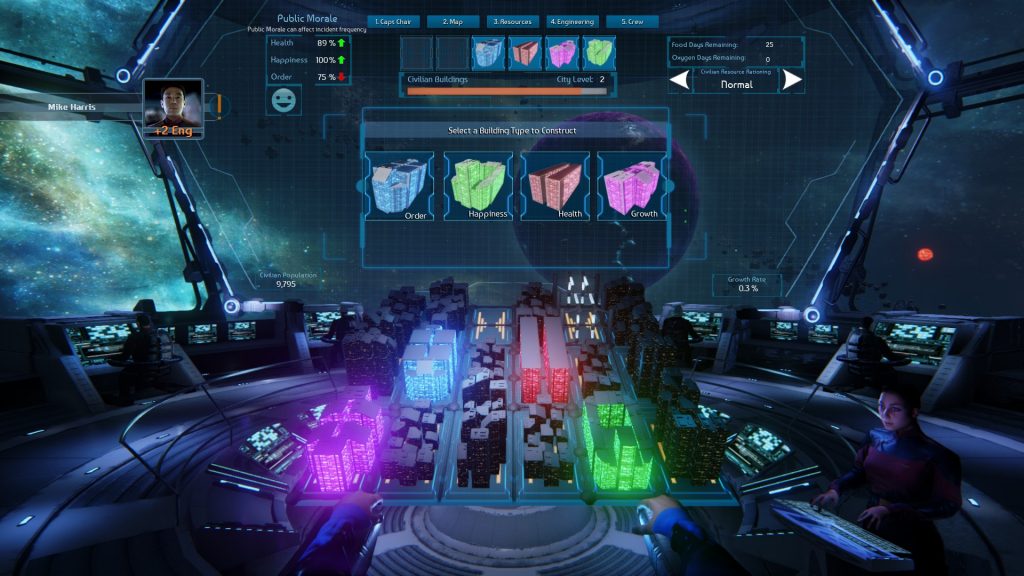 “It’s like FTL but with better graphics!” That’s the initial buzz I was hearing about Into the Stars, a successfully kickstarted title from indie dev Fugitive Games, and it was the hook that got me to try it out. FTL: Faster Than Light is a kind of gold standard game when it comes to indie titles – it was not just well-executed, but so original that it may well establish a new genre altogether. Before long I had Into the Stars installed via Steam, and after hours of playing the game, I came to a stunning realization: Into the Stars is an attractive but complicated mess. It looks great on the screen, the concept is solid on paper, but it’s so much of a hassle to initially get into that many won’t get their money’s worth out of it.

Before delving deeper into that topic, let’s cover the basics. Into the Stars places you in the role of captain-administrator of a massive Ark ship, tasked with guiding your population to safety in a hostile universe. You’re low on supplies, threats are all around, and you’ve only got so much time before everyone dies and it’s all your fault. Your ship is all alone out there, at least where humanity is concerned, and you’re chugging your way through largely-uncharted territory. As far as motivation for a game goes, this is a pretty solid setup – an eagle-eye view of a dire situation, where the fine details aren’t given but don’t really matter anyway. Once again: very FTL.

In the future, all buildings are color-coded to make things less confusing. Expect to be confused anyway.

What immediately sets Into the Stars (hereafter ItS) apart from FTL is the graphics: goodbye old-school pixel art style, hello Unreal Engine 4 powered 3D beauty. There’s also real-time space navigation and combat, and a host of other distinct systems at play. ItS requires managing resources, properly assigning crew members, balancing exploration against the need to reach the ultimate destination, and more. I don’t know about you, but to me, this sounds like a game that’s just bristling with potential. A tense game, but a deep one too!

It’s when you actually try to play this game that problems come in. I like to think of myself as a relatively quick study when it comes to games. Pick your genre, throw me a controller or a mouse + keyboard, and in short order I’ll start clawing my way in the direction of progress. Now and then I’ll come across a title where my intuition fails – and that’s when I swallow my pride and head over to play (or more often, replay) the tutorial to get a better understanding of things. ItS was the latter kind of experience, where I just found myself so confused, so quickly, that I ended up exiting out of my game in order to start over and pay more attention to all the tips and instructions this time around.

Imagine my surprise when I discovered that I didn’t skip through any tutorial. Nor did I miss it on the menu screen. It turns out that, aside from a few basic tips encountered during the game, there’s no real tutorial mode to speak of. Nor was I able to find any in-game documentation. I found myself in the position of being interested in this game – excited, even – but being completely and utterly baffled about what to do. I flipped through various game screens, looking over my crew’s statistics. I discovered what would later turn out to be the screen where I could construct different buildings on my ark. I switched screens around blindly, hoping I’d discover something that would make the whole experience come together. I stumbled my way into the piloting screen and bonked into a planet where I somehow managed to start a resource mining mini-game. After gathering materials, the use or significance of which I couldn’t fathom and couldn’t figure out HOW to fathom, I then did what came naturally.

‘Send Scooby-Doo and the gang to inspect it!’ should really be an option here.

I alt-F4’d out of the game and went to do something else for a while. And I suspect I’m not the only one who’s going to react to ItS that way.

ItS can be summed up in a single word: non-intuitive. Sometimes games manage to pull off the lack of explicit instructions in a good way, where the whole thing feels like a fun journey of discovery. Here, it’s just a convoluted chore that immediately feels burdensome. Trying to soldier my way through it and force myself to understand the system was hampered by the user interface. Text is at times unreadable, even on my 42″ LCD TV. The escape button doesn’t close menus or back out of choices despite every intuition telling me it really should. Going from menu to menu is delayed by some crew member pawing at the display, which I suppose is to lend a feel of realism to the affair – but it mostly just feels like a sluggish hassle. All while struggling to figure these details out, time is marching forward – and lending a sense of urgency to confusion resulting from inadequate explanation is not a pleasant experience.

Nothing says advanced technology like progress bars and a giant red button that says ‘FIRE’.

After a while I managed to brute-force my way into some of the ItS gameplay experience itself, but by then it was less about learning how to play the game and more about quickly inspecting things just so the experience could be over. I got to play around with the mining, which is a kind of digging mini-game where the goal is to bump into as many vital resources and as few hazards as possible. Gathering resources is necessary to keep your ark citizens happy, but that has to be balanced by the ever-present threat of hostile enemies. Now and then there will be both disasters and opportunities that befall your crew – you’ll need to deal with sick crew-mates as soon as possible, or maybe use an opportunity to boost their skills. The general experience of ItS is one of playing a variety of so-so mini-games, and needing to balance your attention in multiple places at once. Once you’ve figured out exactly what’s expected of you, the whole package feels a bit more fun – but by then, it’s too much mental chore-work for too little payoff.

The end result is that Into the Stars feels like a decent-enough game hampered considerably by questionable user interface choices and a lack of much-needed player guidance. If the goal was to force the player to discover things on their own in order to build a sense of accomplishment via learning, I can’t help but feel the developers made a poor choice here. For $19.99 in the Steam store, most gamers will probably be better off passing this game by and waiting for another attempt at a fresh FTL-like experience.

Into the Stars is a creative and unique game which nevertheless manages to disappoint. The combination of complicated gameplay with a distinct lack of direction means that only the truly determined will likely get far with the title - but it just isn't interesting enough to warrant the investment from most.

Victor Grunn has been a gamer since the days of single-button joysticks and the Atari 800XL. When not lamenting the loss of the Ultima series or setting people on fire in Team Fortress 2, he's an aspiring indie game developer and freelance writer.
Related Articles: Into The Stars
Share
Tweet
Share
Submit