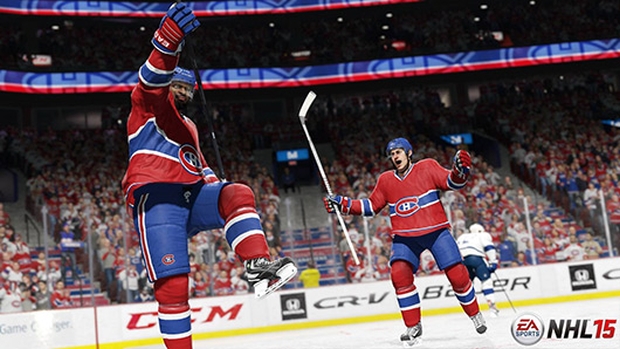 The ice is beginning to thicken now that NHL 15, the next installation in EA Sports’ long-running hockey franchise, has dropped onto store shelves.. With its official launch, many wondered if it could live up to the next-gen visual standards set by the likes of MLB: The Show and NBA 2K. Apart from graphical fidelity, developers EA Canada focused heavily on improving the in-game play by tweaking puck physics, improving player animation, and a host of other changes. These changes were nice to see as, while visuals are important, gameplay has always been the star of the NHL show.

Even if you have no experience with hockey, NHL has always been a series that was welcoming to newcomers. Part of that is due to the accessible nature of some of their control schemes, including one that drops the “skill stick” entirely, relying solely on the buttons. That being said, if you are experienced with the NHL franchise, you can always choose a more difficult control scheme that increases immersion further. The biggest drawback for new players is the lack of a suitable tutorial mode. While games like Madden have a variety of drills to get you used to plays, schemes, etc. NHL has none. The closest thing to a training mode is their “Practice Mode” which just has you skating towards the goalie and attempting to score a goal with no players around, similar to a shootout situation.

Possibly the best way to jump up in skill is by hopping online, a sort of trial by fire experience. If you are a bit inexperienced with the game, you will no doubt get rocked early on; take for example my painful 11-0 loss. The talent level online is predictably very high as folks know exactly what they are doing and how to tear apart every little thing you try. Luckily, playing the game is fun enough that a crushing defeat does not discourage you but only makes you want to continue playing more in order to get better and eventually be as good as the big boys/girls that are destroying you.

Performance wise, NHL 15’s online is very solid. EA Canada has had more than a few years to beef up their servers and everything seems to be running smoothly with only an occasional hiccup. Finding a match is as simple as pressing the first menu option in the online mode and waiting a few minutes for an opponent to appear. It works very seamlessly, something needed in order for the sports online experience to work.

NHL 15 comes with a completely revamped presentation that manages to wow in spot but also disappoint in others. If you have yet to see, you get a live-action video of Doc Emrick and Eddie Olczyk before the game where they discuss whatever random point they feel like. While this could look a whole lot worse, it still does not seem to jive perfectly with the game. The posture and line-reading of the two come off as reeking of confusion as if they know they are reading their lines with little to no context. That is highlighted by the fact they do not have very many lines before the game. You will see these sequences repeat a few times.

Fortunately for the two, the pre-game situations are the only negative part of their addition to the NHL franchise. The NHL games have always had some solid color commentary so dropping the previous duo, Gary Thorne and Bill Clement, seemed like a bit of a surprise. Any worries that may have came out of that dropping have been rectified as Erick and Olczvk are very good at providing expert analysis of the game before their eyes. One of the hardest things to do when making a sports game is making sure the commentary does not get too repetitive (ask WWE 2K) and EA Canada’s writers made sure of that by providing Erick and Olczvk 35,000 lines to perform. While the pre-game setup leaves a bit to be desired, Erick and Olzvk’s performances are one of the best new additions to the NHL franchise.

Stunning visuals are something we have come to expect from the NHL franchise, and that continues to be the case in NHL 15. The artists over at EA Canada have made NHL 15 feel like a true next generation game by creating character models and environments that pop with beauty. Every player looks unique and the ice you skate up and down has never looked better, with blade marks increasingly appearing as the game rolls forward. There is also an increased level of detail to be found within the crowd as you will find 9,000 unique models – the most ever in a video game – staring straight at the action happening on the ice. Possibly the most impressive thing about NHL 15 are the animation systems. Every character movement is flawless, with the physics never taking over and making a fall awkward. The NHL Collision Physics continues to come closer and closer to perfection, upping itself from last year.

The animation helps make the actual gameplay a joy to partake in. The gameplay of NHL 15 is just as great as in years past with control schemes helping drive forward a memorable experience in each game you play. EA Canada has introduced new puck physics which are hard to notice unless you have played a whole ton of previous NHL games, nonetheless they do contribute to making NHL 15 play more smoothly than ever before. The past few years of NHL games have been bookended by excellent gameplay and, despite the lack of a major change, that persists in NHL 15. You will find yourself dying for more and more NHL until you look up and realize you have been playing for five straight hours.

Speaking of things remaining the same, no positive changes have been made to either NHL’s Be A Pro or Be A GM mode. The reason I say no positive changes is due to the fact that some features have been removed. For example, you can no longer manually draft players in Be A GM, a key part of your experience with the mode. This makes rebuilding a team more difficult than it would be otherwise. The lack of a manual draft is absolutely baffling in the grand scheme of things; it is something that makes you tilt your head and say “How could they ship the game without this feature that other sports games have possessed since the PS2?”

Apart from that major hiccup, the modes themselves remain a good way to kill time. The Be A Pro mode lets you progress your way through your own career and do your best to win your own Stanley Cup. Unfortunately, the lack of a manual draft is not the only problem plaguing NHL 15’s game modes. To put this simply, the UI design in NHL 15 is atrocious. It has a fairly similar style to other EA games, reminiscent of Microsoft’s Metro design. Except while Microsoft’s design is snappy, waiting for a menu to load up in NHL 15 is like watching a turtle run a wind sprint. It takes way too long to open anything and finding certain options can be a humungous pain. The menu design in NHL needs a serious overhaul. A game that plays as well as NHL 15 should not be laid under such an absolute garbage UI design.

The next generation jump for NHL 15 is far from a mind blowing one. It brings about fantastic visuals and more of the same excellent gameplay we have come to expect. Unfortunately, it really is just more of the same but with an impressive visual bump. Of course, the improved presentation is nice as well but it lacks that oomph needed to wow consumers. That being said, EA Canada has done enough to create a very recommendable hockey game, but they may have some trouble on their hands if they continue to provide more of the same next year.