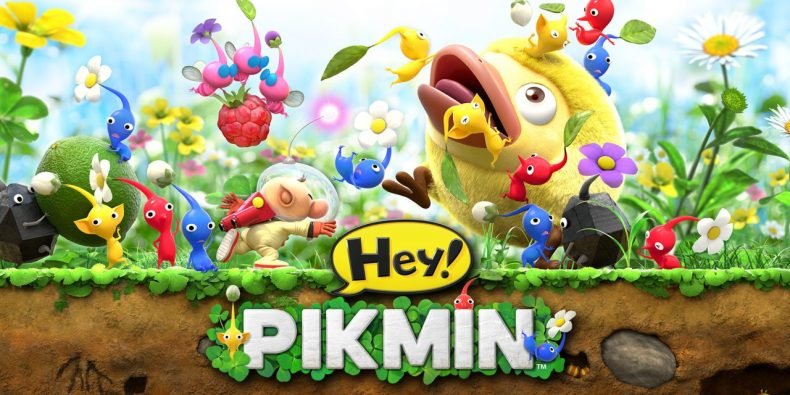 Years ago, Shigeru Miyamoto had an interview with 4Gamer about the release of Pikmin 3. During that 2013 interview, he talked about prototype tests for Pikmin on the DS and 3DS. “The truth is we were doing prototype tests of Pikmin for the DS and 3DS but it turned into unit management with only the touch pen and no matter what it just didn’t seem like Pikmin. We concluded that Pikmin is a game that revolves around action based on its controls and the strategy sits on top that. Although there are elements that are built on the strategy, there are other overall things that have to be well considered. This complete experience is an important elements of Pikmin.” This is what immediately came to mind when I heard that Pikmin was coming to the 3DS. However, the product we got isn’t exactly like the Pikmin we are familiar with.

Hey! Pikmin is an interesting take on the Pikmin series. It’s a mix of platformer with puzzle-solving via throwing Pikmin above you. This is certainly not what we were envisioning for a handheld entry in the series, but it makes sense, given how hectic a traditional Pikmin game would be on a handheld device.

Azrest, the developers of Hey! Pikmin, aren’t unfamiliar with making games with popular Nintendo characters. Previously, they were in the developers for Yoshi’s New Island, a game that received mixed reviews. Azrest was formed by key members from Artoon, who developed Yoshi’s Island DS and Yoshi Topsy-Turvy.

Yoshi’s Island for the SNES is my favorite videogame of all time, so my expectations from Artoon and Azrest were ridiculously high. After several entries that failed to live up to these expectations, I lost hope that Azrest would ever be able to adapt a series into a worthwhile game.

Enter Hey! Pikmin. While it isn’t living true to its predecessors (much like Yoshi’s New Island), Hey! Pikmin is an experimental take on the world of Pikmin. You play as Captain Olimar, who has once again crash landed on a world eerily similar to our own. To get off of the planet, you must find treasures that contain Sparkium, the fuel source used to power your ship, the S.S Dolphin 2.

Instead of a time limit, Hey! Pikmin has various stages, each with several treasures hidden throughout. To get these treasures, you have to walk around, find Pikmin and tap the screen to throw them into different places to either carry the treasures, attack enemies, or solve puzzles. Each Pikmin type has different advantages. Red Pikmin can resist fire and have stronger attack power, Yellow Pikmin can jump higher and resist electricity, Blue Pikmin can swim, Rock Pikmin can destroy glass and can’t be stabbed, and Flying Pikmin, well, fly, and can carry your body down trenches slowly. Each of these Pikmin are true to their Pikmin 3 counterparts.

Since Hey! Pikmin is on a 2D plane, fighting creatures is much more difficult than it is in the other Pikmin games. When an enemy is coming after you, you can either try to throw the Pikmin so they arc to the creature’s behind, or wait for the creature to turn around. What makes this frustrating is the fact that Pikmin seem to die if they even brush against an enemy the wrong way. It feels less like you are controlling Pikmin and more like you’re throwing a bunch of tiny Marios. The combat seems to work best against the game’s many bosses, which are, hilariously enough, often just normal-sized enemies from previous games. When your view is scaled to Olimar’s, these creatures are much more intimidating.

Instead of raising armies of Pikmin, you find different Pikmin throughout the stage. You’re given a certain kind of Pikmin for the obstacles ahead, but this often makes their abilities feel shallow and, at times, not any different from most of the other abilities due to being given the right Pikmin for every situation. This is something that works in Pikmin 3 in ways that restricted your access from certain areas, but in a 2D platformer, it’s feels more like a nod than a mechanic, except for the Flying Pikmin that got several levels that almost resembled a shoot’em up that I adored. Losing your Pikmin doesn’t carry the same weight it once did, either. Since you find Pikmin in shrubs, up to a maximum of 20 with you total, them dying only stops you from getting treasures or a special indication on the level select screen that you let all of the Pikmin survive. If you lose all of your Pikmin, more will spawn in the shrubs.

Early on, the game states that your main goal is to reach 30,000 Sparkium. This is done by gathering treasure, berries and having your rescued Pikmin work in the Pikmin Park. This is similar to Pikmin 2’s treasure hunting goal, but it’s not nearly as successful. The real goal of the game is to make it to the end of the final sector. I reached the 30,000 goal around the 6th sector of the game with plenty of levels to go, so it made the treasures feel useless. Sure, there are incentives to gain more Sparkium such as gaining more hitpoints or increasing your boost gauge, but I didn’t find these to be too useful in the long run. To make matters worse, there doesn’t seem to be an incentive to gather every treasure this time besides to fill up your logs.

As is tradition with each Pikmin game, each treasure and creature has a different log for Olimar to comment on. These are, as always, charming and provide background information on our pint-sized hero. Unfortunately, it is impossible to read every log without spending extra cash.

Hey! Pikmin supports plenty of amiibo including a new figure designed specifically for the game. The amiibo can be used to call for more Pikmin in the game, but other amiibo unlock special levels. I was only able to use a Mario amiibo, but I couldn’t believe that it actually had a short puzzle behind it. What makes this worse is that there are plenty of these levels all locked behind amiibo. Meaning, if you want to read every log in-game, you need to collect all of these amiibo.

Azrest does understand one of the crucial parts of Pikmin: they are cute. In each level, you will encounter several short cutscenes where Pikmin are either being harassed by creatures, or are goofing off. These cutscenes are cute at first, but get very annoying very quickly. I went from going “ha, that’s silly,” to “okay, come on, I just want to play this game,” by the time sector 3 rolled around. Fortunately, you can skip any cutscenes you’ve already encountered.

Besides these many minor annoyances, Hey! Pikmin isn’t a terrible game. It has plenty of levels, each with their own set of challenges. It’s not the Pikmin game we’ve been waiting for, but for now, it’ll help us kill some time while we wait for the inevitable Pikmin 4.

Hey! Pikmin is a quirky attempt at a beloved franchise with many minor annoyances. Throwing your Pikmin is fast and fun, but the different types are hardly used to their advantages and there isn’t a good incentive to collect every treasure.

Sean Anthony likes to combine two of his passions: gaming and writing. Gaming has been a huge part of his life ever since he played his first game as a child, Kirby's Adventure. He aspires to have his name attached to an article that makes the whole world go, "Huh, that's neat, I guess."
Related Articles: Hey! Pikmin
Share
Tweet
Share
Submit