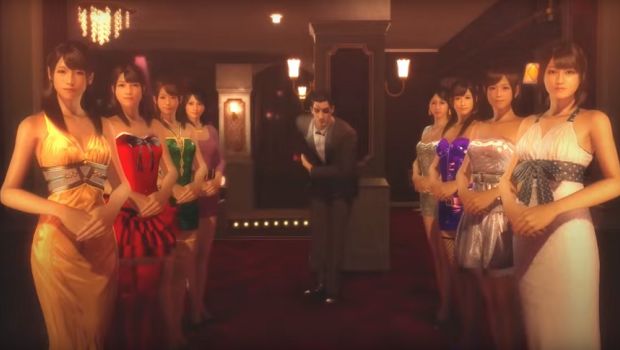 Sandbox games, by nature, generally offer a lot of content. There are a series of challenges scattered around the map, giving the player a large playing field with things to do. Yakuza 0, however, goes far beyond the average sandbox game in that it actually feels like it takes place in a real city.  Not only is the map filled with side missions, distractions, and sites to see, it actually feels alive.  While the city is the main highlight, Yakuza 0 wouldn’t be as great if it weren’t for numerous other elements, like interesting characters and fun, visceral combat.

A prequel to the Yakuza series, Yakuza 0 primarily follows series protagonist Kazuma Kiryu, a newly recruited enforcer for the Tojo crime family.  After a routine shakedown, Kiryu finds himself framed for murder and wanted by the Tojo clan.  Forced to investigate and clear his name, Kiryu finds himself in the middle of a mystery involving a small, unremarkable plot of land that’s somehow caught the attention of criminals and businessmen alike.  The rest of the game is spent playing as Goro Majima, a former Yakuza turned nightclub owner who’s been given a second chance at success in Japan’s seedy underbelly.

Taking place at the beginning of the series, this game’s Kiryu is much more hot-headed

Both stories are interesting enough to make you want to keep playing, but each suffers from some issues as the game progresses.  Kiryu’s story is much more melodramatic, and at times the supporting characters can get a bit annoying. It’s also much larger in scale than Majima’s, which is more personal and focuses on him as a character, as well as the events that turned him into the “Mad Dog of the Shimano family,” his title in later games.  While both stories are relatively strong, Majima’s was the one I preferred, due to the character’s eccentric behavior.  There are a lot of reasons he’s the most famous character in the series, and while his inclusion in the game is pretty much just blatant fanservice, he’s still given an interesting character arc and his theatrical combat style, which includes a lot of combos based on dance moves, is a lot of fun.

While the stories are both pretty good, combat is the main focus of gameplay, and it’s also one of the strongest aspects.  Yakuza 0 focuses on fighting large groups of enemies in hand-to-hand combat, and it’s one of the most elegantly brutal combat systems I’ve seen in recent years.  Both characters have four different move styles, each with different attacks, blocks, and combos.  While you’d expect this to be the sort of system where you eventually settle into a prefered style, each one has plenty of situational uses, and different factors such as the number of enemies, size of the area, or number of weapons on hand forces you to change up your moveset.  By the end of my playthrough, I was still finding uses for both character’s basic styles and still putting points into upgrading them.

Yakuza 0’s combat is brutal and filled with a ton of combos and strategies to master.

On the subject of combat, Yakuza 0 has some great boss battles.  They generally come at the end of a long stretch of enemies, and serve as final lessons for the new moves and styles you learned each chapter.  While they’re pretty tough, each battle is a ton of fun.  For example, the second chapter boss fight takes place after Kiryu learns the Beast stance, a style that focuses on pragmatic use of nearby items and general brute force.  The fight is staged in a well-kept apartment, and by the time I had finished I’d broken nearly every piece of furniture over my enemy’s head, an experience made all the more cathartic by how challenging the fight had been.

Another strong point of Yakuza 0’s combat is that it’s incredibly viscerally satisfying.  The punches land with an audible crack, combos and styles are just difficult enough to master that doing so feels like a genuine achievement, and there are a huge number of takedown animations featuring Kiryu or Majima using whatever they have on hand to dispatch their opponents in the showiest, most brutal way possible.  Add in the copious amount of blood and money that flies out of enemies when you hit them and you’ve got one of the most brutal melee systems I’ve seen in a long time.

There are few things as satisfying as punching a guy’s entire paycheck out of him.

But for a lot of people, the main draw of the game is going to be the cities it takes place in.  A huge amount of effort has been put into making Kamurocho and Sotenbori, the two fictional cities in which the game takes place, feel as alive as possible.  Since the game is set in the 80s, an economic bubble period for Japan, allies and enemies alike quite literally throw their cash around like no one’s business.  As a result, Yakuza 0’s focuses on the bright lights, expensive booze, and pretty girls, the classic gangster fantasy.  It’s easy to get drawn in by all of this, but the negative sides of such a huge city are portrayed as well: garbage lines the streets, the homeless loiter in dark alleys and abandoned buildings, and plenty of hooligans and muggers stalk the streets, waiting to shake down anyone who passes by.  If you’ve ever lived in a big city, you’ll feel right at home here.

And of course, there are plenty of side activities to do.  Just walking down the street, you’ll bump into plenty of people in need of help, which lead to a lot of interesting side quests.  From a band that needs your help to retain its punk image to a slightly creepy storyline involving the sale of used women’s undergarments, you’ll quite literally be tripping over side missions and activities as you go.  There’s a ton of stuff to see, though the map doesn’t always help you find them.  While there’s a lot of fun to be had in just wandering around and seeing what activities and extras you can just bump into, only story objectives are marked on your minimap, and even then they aren’t always clear.  While it’s good  that there’s more to Yakuza 0 than just  following a glowing arrow to the next fight, there are a few moments when it would be nice to have a little more direction.  One particularly annoying point came when I had to keep checking the map to find and check every convenience store, because only one of them to find sold the sake that I needed in order to advance the plot.  While there aren’t many fetch quests in the game, the ones present are made unbearable by the lack of direction.

The city lights and crowded streets feel fully realized, even when they start have technical difficulties.

There are also a lot of minigames and contests to compete in.  Some are based around combat, like a boxing minigame where you have to avoid being punched by drunks for one minute, while others are a bit more… out there.  There are sports based games as well, like batting cages and bowling alleys, and each one is fun enough to occupy you for hours.  I had the most fun with the karaoke minigame, which is another area where the series embraces its campier aspects, segueing into extended music video sequences.  If rhythm games and sports aren’t your thing, the Sega arcade is filled with classic games like Space Harrier and Outrun as well.  If you want to try your luck with your business acumen, both characters have their own businesses, so if you’re the type that likes micromanagement in your games, expect to spend a lot of time running Majima’s club or Kiryu’s real estate agency.

If there’s one major flaw in Yakuza 0, it’s that the graphics are, on the whole, a little dated.  While the art direction and bright color palette distract from the more obvious flaws, minor characters tend to slip into the uncanny valley due to some really ugly facial animation and low-res textures.  There are also occasional framerate drops as well, though for some reason most of these seemed to occur in cutscenes, and the civilians walking the street have a tendency to blink out of existence randomly and conspicuously.  None of these issues distract too much from the overall experience, but they do take you out of what’s otherwise quite an absorbing experience.

Yakuza 0 is a great entry into the series, with plenty for old fans and newcomers alike.  Its story is cheesy and melodramatic at times, and the graphics are a bit outdated, but between a nearly perfect melee combat system and a city bursting at the seams with activity, anyone looking for a sandbox crime game should definitely pick this one up.