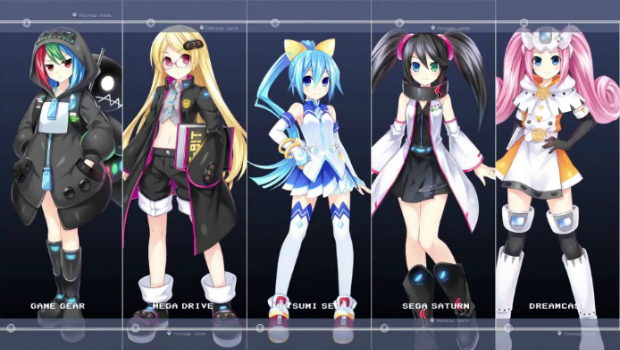 After years of lampooning faux gaming consoles, the Neptunia franchise gets a partner, finally, that allows it to make some references to some real part of gaming history. Superdimension Neptune vs. Sega Hard Girls pairs a cutesy JRPG meta-adventure with the human embodiments of Sega’s failures, successes, and historical footprint. Adorable, slightly more serious, and relatable beyond past Neptunia games, Superdimension Neptune vs. Sega Hard Girls is the most enjoyable game in the series so far.

Perhaps more impressively, given past Neptunia games’ proclivity for the status quo, Neptune vs. Sega Hard Girls does a lot to innovate within their signature game design, and introduce a number of new features that call back to classic platformers, making the game partially a platformer on top of the standard JRPG experience.

The game centers around the wild and nomadic IF, a mysterious figure named Segumi, and the titular Neptune, who is definitely the protagonist (which she reminds you of such several times.) Segumi is amnesiatic,unsurprisingly, and after IF brings her back to a library which contains all knowledge in the universe, she is aided by a reluctant IF and a modified motorbike that can travel time. Numerous characters from past Neptune titles, as well as a litany of new characters based on Sega systems and other paraphernalia start to appear.

The game is very similar to past titles in the series. There is a home base where you can buy and sell items, talk to other characters, and take part in missions. This is streamlined and saves some time, but it makes the game feel much less like a world and more like a series of levels. Other time is spent in dungeons, where you move about the map from point A to point B while fighting battles, triggered by enemies on the dungeon map.

However, these modes of play are greatly enhanced, likely by the presence of Sega on this project. The dungeons themselves are considerably more advanced and involved than past Neptunia titles, with legitimate 3D platforming mechanics throughout. There are “medals” all across the dungeon that are really just coins to collect, as well as item bricks you can open by jumping into them.

While it is a bit confusing why the game used coin-like “medals” and item blocks as opposed to rings and item “monitors” as in the Sonic series, I love how this gives a second layer of activity to dungeon exploration, and makes a successful attempt to call back Sega’s gaming past. In addition to the mechanics and added challenges on-map, the locations themselves are impressively expanded, with hidden collectables and and a lack of linear action.

The battles are also revamped, almost entirely. Gone is the old three-button combo system, replaced now with an action meter that allows you to move, jump, and attack a certain number of times per turn. Health, skill points, and other buffs appear on the battle map as hearts and other shapes that you can jump to collect. Once you’ve built up a “Fever” meter, a giant prismatic heart appears which, once collected, allows you to attack quickly and with more power.

Overall, the game is still a very simple and casual RPG experience. While playing, I couldn’t help but think about how nice it would be to have had this series across the Sega platforms, all the way back to even the 2D era. The tone, colors, music, and overall silliness of the game fits with a lot of what Sega used to appear as, and so the marriage between the two concepts works great.

The story in this game is relatively simplistic and cliched, but with an obvious tongue-in-cheek approach that gives this game a special pass. The dialogue is leagues ahead of what I’ve seen in past Neptunia titles, and the fan service, while still present, is largely played down. There are rare full animation cutscenes, but the majority of the game is still in the graphic novel style. I don’t appreciate this static method of storytelling, but it doesn’t drag the game as hard as it can when paired with terrible dialogue. I’ve always been a big fan of the music in Neptunia games, and this iteration does not disappoint. Lighthearted and bouncy pop hooks glimmer sonically across the game as you progress, and keep things effortlessly light.

Superdimension Neptune vs. Sega Hard Girls is a match made in gaming heaven. A JRPG with some expanded and fun platforming mechanics throughout, this game improves on the Neptunia series model while sending the player on a lighthearted romp through an alternative Sega universe.

Patrick Rost has been with Gaming Trend since 2013. At first focused on sports coverage, Patrick has gone on to cover a wide range of games and other products for the website. Outside of Gaming Trend, Patrick writes and records music, grinds perpetually in Elder Scrolls Online (PS4), and lives day to day with his two dogs, Bob and Stella.
Related Articles: Superdimension Neptune vs. Sega Hard Girls
Share
Tweet
Share
Submit