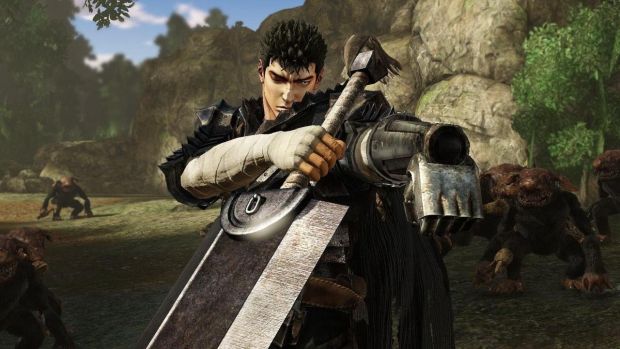 Berserk and Dynasty warriors seem like a match made in gaming heaven. After all, both feature similar elements: a one-man-army with a ridiculous weapon facing down hordes of enemies in battles where casualties can easily go into the thousands. Sadly, the perfect couple has a few issues that start off minor but get more glaring as you continue. While Berserk and the Band of the Hawk has enough good ideas and fun content to keep you playing for quite some time, it fails to stick the landing by missing a lot of what makes both series great.

While there are multiple playable characters in Berserk and the Band of the Hawk, (more on that later) you’ll spend most of your time following the story of Guts, a lone warrior with a ridiculously oversized sword and a bad attitude who finds himself drawn to a legendary mercenary group, the titular Band of the Hawk, by their charismatic leader, Griffith. The campaign actually covers a lot of the franchise, which has been running from the late eighties to present day, covering everything from the original “Golden Age” to the early 2000’s stories.

Don’t worry, they get along eventually.

As it’s mostly a straight retelling of the manga, the overall quality of Berserk’s story and writing is very good. It suffers from some occasional padding, largely due the purely combat-based nature of the game. Berserk does have a lot of long periods without any notable battles, especially in the early chapters, so there are a few moments where the plot is noticeably put on hold to shoehorn in a few quick fight scenes. While some of these scenes are welcome, such as a level giving Wyald, a character with a really cool design who’d been cut from both anime adaptations, some much-needed screen time, most of the others serve no real purpose, and aren’t given much more justification than “Guts fights some dudes who were blocking his way.”

The other problem with the story is that the early cutscenes are just clips from the 2012 movie trilogy, which, to be blunt, are not very well animated. While there’s a noticeable improvement in quality with the last movie, the previous ones are a mess, with choppy CGI fight scenes that fail to blend with traditionally animated backdrops and characters.

Combat in Berserk is a bloody mess, and I love every minute of it.

When it comes to combat, though, Band of the Hawk does an amazing job of recreating the fighting styles of each of the playable characters, especially Guts. Guts’ signature two-handed sword has a lot of weight to it, and you get a real feeling of power as each swing cuts through the crowd and knocks enemies away. This is especially true every time you go into frenzy mode, which gives you a quick taste of the bloodlust the series is known for; every character turns into a deadly machine, with even basic attacks covering the screen with so much blood and gore that it’s hard to tell what’s going on. The moment-to-moment of Band of the Hawk’s combat takes the best of Dynasty Warriors and splashes it with Berserk’s signature style, and it works perfectly at times like these.

Gameplay is based around completing objectives on a large map, and while most of the objectives are pretty simple, (E.G. kill all of the enemy captains within a particular camp), they’re enjoyable for the most part. Occasionally, you’ll get a more complicated one, such as a section where you have to defend a member of your party from a recurring boss who respawns quickly after every defeat. The maps are all detailed and easy to get around, and you’ll find that they’re so full of enemies that you won’t lose your combo going from one area to the next. There are also challenges that unlock collectable Behelits, which, in defiance of series tradition, are a good thing here.

Griffith is a blast to play as, shame you don’t get many chances to play as him.

However, while there is a lot of game here, it quickly becomes very repetitive. While this is a common criticism for most Dynasty Warriors games, it hits especially hard in Band of the Hawk for one specific reason. One of the ways that Dynasty Warriors games manage to feel fresh for so long is the huge amount of playable characters in each game, with the most recent ones having over eighty playable characters. Berserk and the Band of the Hawk, by comparison, has a comparatively sparse character roster, with only eight playable characters. This is a huge shame, considering the franchise had loads of iconic heroes and villains. While the option to play as Nosferatu Zodd and Wyald is welcome, it’s a shame that they’re the only playable villains, especially considering that the monstrous “apostles” have always been some of Berserk’s most interesting characters. Even worse, for the majority of the game you’ll be restricted to just playing as Guts. While free missions allow you to select whatever character you want, and there’s an “Endless Eclipse” mode that offers a sort of mini-campaign “survive the hoard” mode, the story of Berserk requires Guts to go solo for most missions, which means that you’ll get tired of his moveset quite quickly.

What the character roster lacks in quantity, though, it makes up for in quality. Each character has a unique moveset that takes their fighting style from the series and exaggerates it to fit into the frantic hack-and-slash gameplay. I found that, in free mode, I really liked playing as the other mercenaries, as each character really felt like they had their own personality that was reflected in their movements and animations. Griffith, being a confident general with delusions of grandeur, fights like he expects every stab, parry, and thrust to be followed by applause, while Casca, a brutal warrior with a lot of formal training, is constantly ducking and weaving around the battlefield, dodging enemy attacks while simultaneously planning her own. The movesets are true to the characters that fans know and love, which makes it even more of a shame that you don’t get much time to play as each one in the story mode.

One of the most brutal, tragic chapters of Berserk’s story is sadly undercut by shoddy editing.

The one final complaint I have about Berserk and the Band of the Hawk has to do with the way that mature content has been cut from the game. It’s inevitable that a series as graphically violent and sexually explicit as Berserk would face some changes when adapted into a video game for a mainstream audience, the way it’s been done feels a bit strange in a mature title, especially one where the average sword swing in frenzy mode knocks off about three heads. While this is noticeable all throughout the game, it’s at its most obvious during the Eclipse, an infamous chapter of the Golden Age arc comparable to Game of Thrones’ “Red Wedding”. Some of the cuts in this chapter make sense, such as the removal of one particularly infamous scene that definitely would have garnered an “Adults Only” rating, but a lot of the impact is lost when the majority of the numerous character deaths aren’t actually shown onscreen, with the screen instead fading to black right beforehand.

Berserk and the Band of the Hawk

Berserk and the Band of the Hawk, like its source material, isn’t for everyone, but underneath its many flaws lies a solid core combat system and a great campaign mode that does a good job adapting the long-running manga to fit the Dynasty Warriors structure.

Christian DeCoster is a freelance writer and indie developer. Before writing at Gaming Trend, he wrote for GameSkinny. Enjoys horror movies good and bad, as well as Southern Bastards, the best comic no one's reading, and weird indie games.
Related Articles: Berserk and the Band of the Hawk
Share
Tweet
Share
Submit