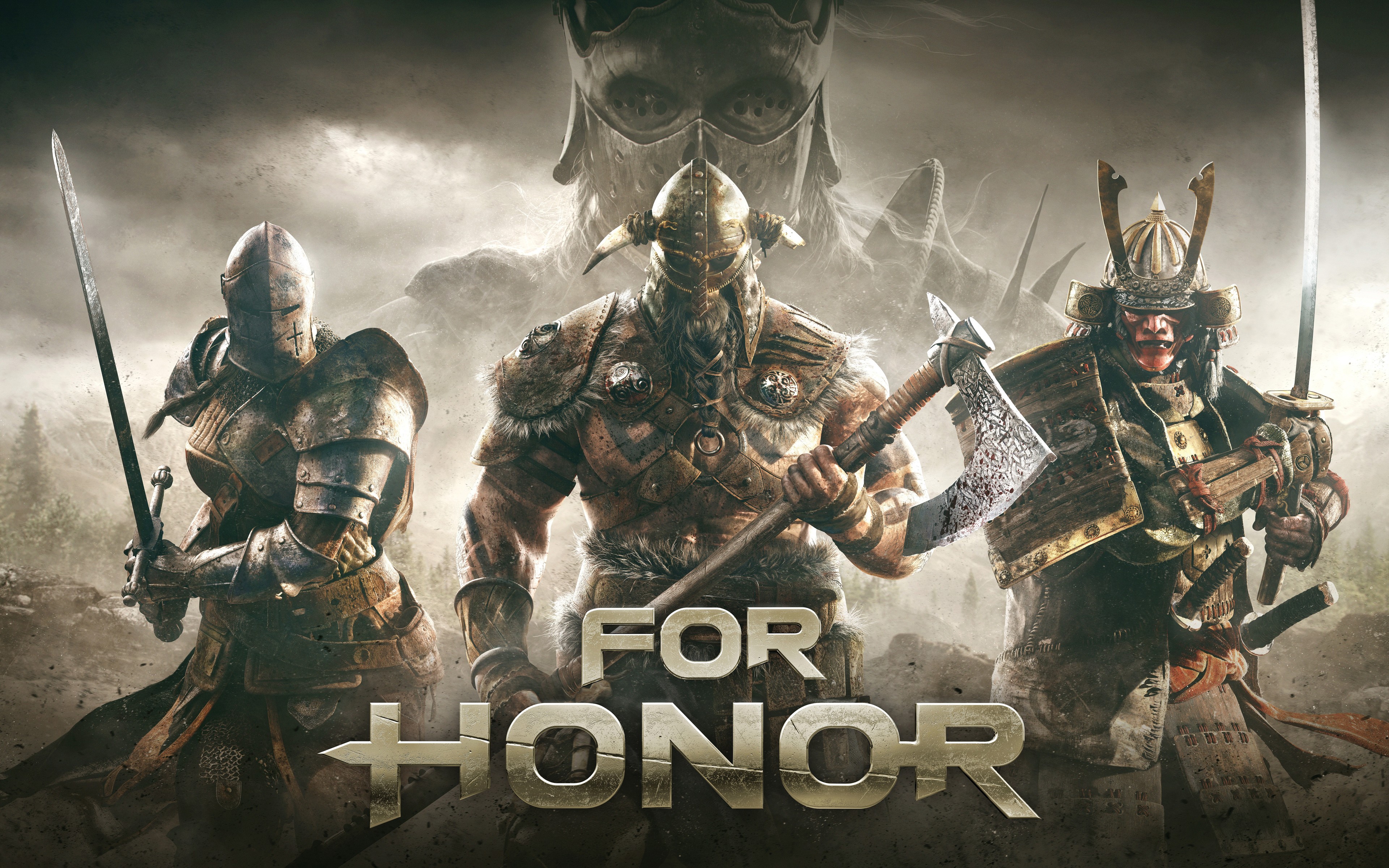 You know a game is engaging when you have to physically pry yourself from it just so you can write a review. For Honor has taken the all too familiar concept of “Who would win in a fight?” and turned it into an experience that is beautifully crafted, mechanically sound, and fun as hell.

Set in a post-cataclysmic, feudal world, knights of the Iron Legion, the Warborn vikings, and the samurai of the Dawn Empire are in a centuries-old violent conflict over what little land and resources are left. You choose who you wish to fight for and join the battle over territory in a conflict known as the Faction War. As tough of a choice as that may be, all heroes are available to play, no matter who you pledge your allegiance to (knights can fight as samurai, vikings as knights, etc.). And you can still fight alongside your friends if they happen to choose a different faction than you.

For Honor is, in essence, a playable episode of Deadliest Warrior. Three flavors of warriors pitted against each other for the ultimate fighter contest. It has a perspective akin to Shadows of Mordor, if that game had more than just the orcs versus one human. Players compete in various multiplayer battles to earn points, those points then pool across platforms onto a territory map, meaning whether you play PC or console, you contribute to the same Faction War. Victories are rewarded with content based on that faction, such as armor, hero colors and weapons, exclusive to that round’s results. After each battle, players can choose to deploy war assets onto the map in order to contribute to the Faction War.

As someone who’s never excelled at online first-person, or even third-person combat games, I, somehow, took to For Honor like a fish to water. The game is most definitely meant to be played with a controller as opposed to mouse and keyboard, and the combat mechanics are easy enough to learn, yet complex enough to hone and refine. Each faction has four different types of heroes (Vanguards, Heavies, Assassins, and Hybrids), giving players a total of 12 heroes to choose from. Each hero has varying levels of playable difficulty as far as learning their skillset goes, but as stated previously, the learning curve is easy enough. I have a personal favorite hero in almost every faction, so I’m glad to not be limited to the knights, as noble and superior as they are (I’m not biased, I swear!).

The story mode follows the efforts of Apollyon, a warlord knight (not to be confused with the viking warlord hero) of the Black Stone Legion. Within these three chapters, each focusing on knights, vikings, and samurai, we watch Apollyon’s philosophy of war spread throughout the world still scarred by the mysterious cataclysm. To Apollyon, humans are divided into two groups, the subservient sheep, and the dominant wolves. She intends to bring about an era of war, which is, to her, the natural state of man. This is one of the coolest villains I’ve ever seen in a video game. Without sounding too biased, it’s such a cool feeling to see a powerful female villain. Frankly, the female representation in this game is overall fantastic, but Apollyon takes the cake for me. She’s strong, clever, has an amazing voice actress (Catherine Kidd), and drives the entire story of For Honor as the antagonist.

The greatest aspect of the story campaign is that it forces you to try out each hero at least once, learn how to fight as that hero, and explore the narrative through his or her eyes. It’s a fitting feature for a game with such a variety of fighting styles. Moreover, its multi-protagonist plot allows the story to focus on building tension in the Faction War. Ubisoft could have easily let players get comfortable with one or two heroes for the story campaign, but then you wouldn’t get the chance to see all the factions, what they’re fighting for, and the motivations behind all the heroes, including all of their perspectives on Apollyon.

The story mode also provides different challenges and goals to get through. While there are similar elements to the multiplayer mode, such as the idea of capturing territories and one-on-one duels, the story, in essence, is a different can of worms. You can see the Peacekeeper in her element, sabotaging an entire encampment of enemies, watch the forsaken Kensei take on rival, corrupt daimyos, lords and vassals to the emperor, in the face of an empty throne, and play a viking Warlord to take back stolen shipyards from the Black Stone Legion’s army. It all comes together and builds up to the Faction War that follows the events of the story.

As much as I would like to talk about the story mode all day, the multiplayer Faction War is where this game really shines. With the war divided into seasons, rounds, and turns, players fight to occupy the most territory at a given time through five different types of game modes. You can engage your opponent one-on-one in a Duel, which is great if you want to practice honing your skills with any particular hero. Duels are where you can get really creative. There is less going on in the environment, so you can focus on more complicated maneuvers, hit combos, and the ever-difficult act of parrying (seriously, parrying is the worst). In each game mode, you can play against an AI or another player. It’s not quite training mode because your actions do count in the Faction War, but out of all the modes, it’s the best form of hands-on practice

One of my personal favorites is the Brawl mode, a 2 v 2 skirmish with a variety of possibilities. Often Brawls start with two individual duels on the battlefield, but sometimes one pair will team up against a single opponent in order to take them down faster. I noticed a lot of “honorable” fighting in Brawls, where if one pair completed their fight before the other, the victor would wait for either their partner to win, or lose, continuing only after one was taken down. Alternatively, they might just gang up on the remaining opponent. It’s hit or miss.

Elimination and Dominion are both 4 v 4 game modes, with Elimination being similar to Brawl but with more players. Dominion is a straight-up battle royale, complete with minion soldiers, and capture points, much like a typical MOBA. It’s similar to League of Legends, but with a different vantage point. Points are awarded for killing minions, rival heroes, and capturing portions of the map, which are worth the most. Once 1000 points are reached, the losing team loses their ability to respawn and the final kills of the match are imminent. Elimination has a neat feature where you can stand on various icons in the environment and gain boosts, giving you and your team an advantage in the fight. Whereas in Dominion, you get constant respawns until one team reaches 1000 points, Elimination is a straight-up fight to be the last man standing, no respawns.

Skirmish is found under “Deathmatch”, along with Elimination. It has some similarities to both Elimination and Dominion. While it is my least favorite of the game modes, it’s great for people who enjoy long games with a “grindy” feel. With the same point and respawn systems as Dominion, players battle it out until the 1000 point threshold is reached and the losing team is slain. However, unlike Dominion, there are no capture points or minions. All the points are earned through kills.

But everyone wants to stand out on the battlefield, right? There’s no sense in killing if you can’t look good while doing it. To that end, the customization is varied enough to give your designated hero that unique look, but not enough to make the battlefield look tacky. In addition, different custom pieces, whether it’s armor, weapons, or shields, give different advantages and disadvantages. There is also a dismantle option in case your inventory gets a little too cluttered or if you’ve outgrown that particular item. I love personal touch all the different players can add, and it brings a ton of different personalities to the battlefield.

I have very few complaints about this game. The menu can sometimes be a little hard to navigate when first starting out. Additionally, for the longest time, I wasn’t sure how to contribute to the Faction War, something that could be easily fixed with a simple highlight feature on the selected menu tab. There are some balancing issues as well. For instance, the Nobushi is incredibly powerful with her ability to create a constant bleed effect from a single stab. When compared to the Peacekeeper’s similar ability, the Nobushi is still far more deadly.

Another worry I, and one that has been echoed by many others is the lack of Ubisoft dedicated servers for such a largely populated game. Right now it’s a peer-to-peer server, meaning you connect directly to another player’s PC or console, and this can be problematic for launching such an enormous game. This is also a problem when the host experiences less lag than the others, putting them at an unfair advantage. Larger games tend to require dedicated servers provided by the developer in order to function at a better rate. If Ubisoft really wants For Honor to reach its full potential, they should bite the bullet and fund some dedicated servers.

Whether you prefer, multiplayer or story, Dominion or Duel, viking or knight or samurai, there’s something for every gamer in For Honor. With a compelling story, beautiful customization options, competition, community, this game is both a triumph and a damn good fight.unity, and a damn good fight.