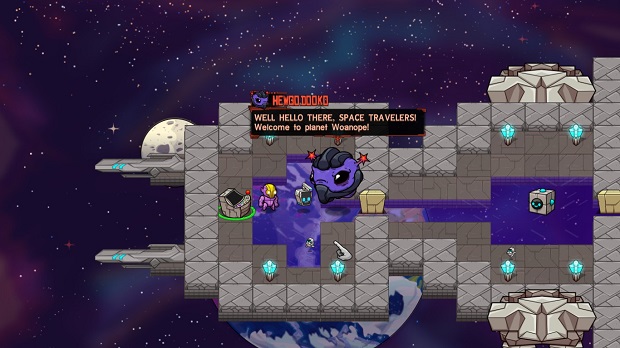 Being that I am from St. Louis and have a vested interest in video games, last year I decided to research indie studios in the St. Louis area. I browsed through websites and followed a few of them on Twitter to see what they’re up to. Then one day I noticed a post about a game called Crashlands.

Crashlands was created by a studio called Butterscotch Shenanigans. This trio of brothers have produced four major titles for Android and iOS, but Crashlands is their first major title for the PC. Even though I hadn’t been following their work for long, something about the game’s trailer really intrigued me, and in an instant I had preordered it.

I’ve had the opportunity to follow this title through its trailers and different beta builds. Though some tweaks have been made, it’s been awesome from the very beginning, retaining the same solid foundation and engaging story.

Isn’t that how it always starts?

You play as Flux, a purple alien who’s traveling through space with her robot companion, Juicebox, to deliver a few packages. All of a sudden, they encounter a monstrous floating head named Hewgo Dooko who promptly blows up their ship to steal an electronic part he needs. They crashland (get it?) on a nearby planet and the story begins.

Crashlands has bright cartoony graphics and amusing, sometimes punny dialogue. It’s been compared to Don’t Starve, but with modern tech, aliens, and story quests. You will find houses, towns, supply caches, and many other spots of interest all over the expansive map. There are three different biomes, each with its own flora and fauna, as well as its own mysteries to discover.

A tutorial in the beginning walks you through everything you need to know about crafting, complete with puns.

As far as harvesting and crafting goes, you have an infinite inventory and there are hundreds of schematics you could build. The crafting stations allow you to track recipes so you know what materials you’re looking for while you’re out wandering around. With tool integration, the tools you need are auto-equipped right when you need them, so you don’t have to do it yourself. This system is all about convenience, and I feel like it picks up the slack where a lot of crafting systems in other games have failed.

The stats of weapons and armor you can build increase as the monsters you meet grow stronger and the quests ramp up in difficulty, so I would say everything is well-balanced for just the right amount of challenge. However, it’s been tempting to stay behind on upgrades because the helmet I have right now makes me look like a space cowboy.

This screenshot is a pretty good summary of Crashlands: an alien in a cowboy hat with his fire-spewing pet preparing to fight a mini-boss named Jibblies.

The monsters you fight throughout your journey are unique, and the aliens you befriend have their own little quirks as well. Some of them ask you to help protect their city or recruit you to fight one particularly rough monster, while others actually keep monsters as pets. If you want your own pet, just wait to see if the monsters you defeat drop any eggs. You can build an incubator for any type of monster you encounter, then after they’ve hatched they can follow you around and assist you in battle. Switch them out whenever you want so you can fully utilize their different strengths with whatever you’re fighting.

As I mentioned, no two monsters are alike. Each has its own powers and movement mechanics. The further you stray from your station in a biome, the tougher they are. I cannot begin to describe how intense it was the first time I encountered a Throak, with their tentacles pushing through the ground to hit me for tons of damage and slow down my getaway. The game is designed so you’ll see a monster’s area of attack highlighted in red right before they strike. In time, you can learn their patterns and become more adept at fighting them.

There are several sizes of Tartils all living in this area around the tar pits.

Some monsters are aggressive all the time, while others will hardly bother you when you walk past. There are various ages within each type, with the hatchlings being the easiest kills and the differently-colored legendary ones being a way to show off your skills. A couple monster types are nocturnal, so while it isn’t quite the hellish landscape that Minecraft can be at night, it does get harder traveling around during the late hours. Also, thankfully when you die, you don’t lose every single one of your items, just a handful. Then when you respawn, your point of death can be easily spotted on the map and your items retrieved.

The legendary monsters feel like mini-bosses, but there are some actual boss fights thrown in for good measure. Some are integral to the story, while others are just for fun, but they all hold rewards at the end and it takes a real fight to earn them.

Infiltrating a super secret religious compound as a spy for another religion. No big deal.

However, even with the awesomeness of the monsters and the crafting system in view, one way this game has really impressed me are its quests. Sure, there are plenty of go-here-and-kill-this missions, but the main story and side jaunts delve into politics, innovation, mythology, and a whole lot more. I’ve traveled to a grandmother to deliver her grandson’s remains, packed a survival kit to aid a friend in their a trip through the wilderness, put up signposts for a topographer, and been caught in the middle of the two main religions in a region. It’s much deeper than its humorous trailer may make it appear.

This review is based on the Adventure mode of the game. Since the beta, the game’s designers have added three other modes, for a total of four difficulty settings. Adventure has the best overall balance, while Exploration is an easier mode for those who want to focus on the story and crafting. Challenge is a little more difficult than Adventure, and Insane is for those who want to focus on combat and really test their skills.

Suffice it to say, Crashlands has had me absolutely hooked. There’s just something special about this game, with moments that have made me squeal with delight, gasp because of a plot twist, or simply chuckle at the absurdity. The attention to detail is magnificent, from the sound design of monster attacks to the descriptions on every crafting material. Not only is there a lot to do in this game, but you feel like there’s a reason to do it. In spite of the amount of places you need to travel or supplies you need to gather, none of the quests feel like a waste. It’s completely absorbing and loads of fun.

Crashlands is a charming cartoony story-driven RPG. The Adventure mode is a near flawless balance of story, exploration, combat, and crafting, but if you have a preferred playstyle or want to try something different after you’ve beaten the game, there are three other modes to choose from. With its convenient gameplay mechanics and detailed design, time easily flies while playing this enjoyable game.

Sarah Marchant is an office admin for a nerdy t-shirt company. She has a soft spot for indie games, a passion for story-driven titles, and a weakness for cooking games and anything with zombies.
Related Articles: Crashlands
Share
Tweet
Share
Submit