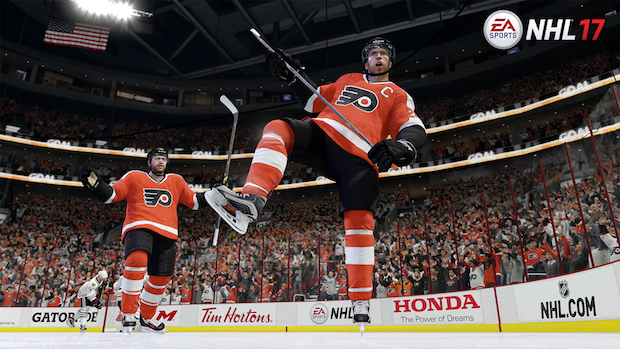 After a disappointing outing in 2014, the NHL series got back on track last year. It revitalized the franchise by providing a great new on-ice trainer that helped new players and managed to evolve over time to fit different gameplay styles. That being said, it was clear the series needed some more life injected into it. The on-ice gameplay is as polished as it can be, but the modes surrounding it felt thin and outdated. Even though it felt like the same great experience had returned, some new features would be more than welcome.

The EA Sports franchises have always been known to strike with a new feature when it’s most relevant in the sports world, with the implementation of the women’s World Cup appearing in FIFA last year as one of the clearest examples.This year is no different, as NHL 17 puts the World Cup of Hockey as a focal point of the experience. The World Cup of Hockey is a NHL event that focuses on eight national teams. These teams feature the best players from that region, very similar to an Olympic matchup.This group is then split into two as four teams go head to head, and eventually a small bracket of the top four is formed.

From there, everything performs as you would expect. Teams are populated accurately, the unique jerseys are all there, and the final best of three series is incredibly tense. That  said, this is only the third World Cup of Hockey to actually take place, so its size and importance feels a bit lacking.

Unfortunately, there’s nothing as significant as the on-ice trainer to be found within NHL 17’s actual gameplay. The trainer is still excellent and evolves even better than  to your specific play style. The most notable change on-ice is the ability to participate in net battles. One thing that the series has always been great at is reenacting the many scrums that happen on the ice, but the action around the net has always seemed a bit off. In reality, players are jostling, shoving, and butting heads in hopes of moving the opponent out of the way. This is something you can now take part in by holding down Y and letting your selected athlete try to knock the opponent out of his zone. On higher difficulties, this is critical in order to stop a one timer.

Animations are improved in sports games every year; it’s an easy bullet point to add. But NHL has consistently, even in its down year, been a visual powerhouse. In spite of that, the goalkeeper animations have long been a tough nut to crack. Usually, there are plenty of times where a shot will ricochet off the goalpost as the keeper goes wild, gesticulating all over the place until the model locks the puck into their glove. Thanks to a new “authentic goalie” system, this weird quirk is experienced less. It definitely still happens, but the movements of the most important player on the ice look much smoother.

A few years back, Madden implemented a Draft Champions mode that quickly became a huge success. It balanced the card-based gameplay Ultimate Team fans have come to love with an accessible fantasy draft-style system to acquire talented players. NHL 17 implements this system , virtually unchanged from the Madden system. You choose a theme of your draft from the outset, which gives your team a unique flair, but after that things go exactly how you would expect if you’ve played the mode before. You use a pre-generated team, roll through 12 rounds drafting skilled players, then take your team online or play local games. It’s still a very smart and fun thing to take part in, but it would be nice if Draft Champions had a bit more flavor.

Unfortunately, the need for flair extends beyond Draft Champions and into the new additions to Franchise Mode. While running through your standard franchise, trading and resigning players, altering lineups, etc., you can now change prices for tickets, vendors, and parking. Additionally, you can also relocate your team and assign promotion nights. These have existed in other sports franchises for years now, but have been treated as a game-changing addition in NHL 17. In a series that seriously lacks a mode to increase longevity, advertising these two modes as a crucial experience for consumers is just disappointing. While I’m sure many have never experienced these modes in Madden or FIFA, that doesn’t mean those people should play second fiddle and get hand-me-down’s from other EA Sports properties.

It’s another year, another lack of true strength in the modes for NHL 17. Despite that, the on-ice play is still second to none and absolute joy to play.  There’s a reason NHL is considered one of the best franchises around, and the tense, nerve-wracking play proves that in every game. The on-ice trainer continues to be a brilliant addition and the new animations make everything feel more smooth. It’s disappointing that NHL isn’t hitting its full attention by layering content on top of content. Nonetheless, NHL 17 is another solid project created by EA Sports as the hockey itself has never been better.

Few games execute as well within their actual play as NHL, and that continues with in the newest installment. There's a lack of girth around the main game, with Draft Champions and Franchise Mode feeling like copies from previous EA Sports games. But at the same time, the on-ice play has never been better, the on-ice trainer is improved further and adding in net battles was a smart move. While it disappoints slightly, NHL 17 is still a must-play for hockey fans.