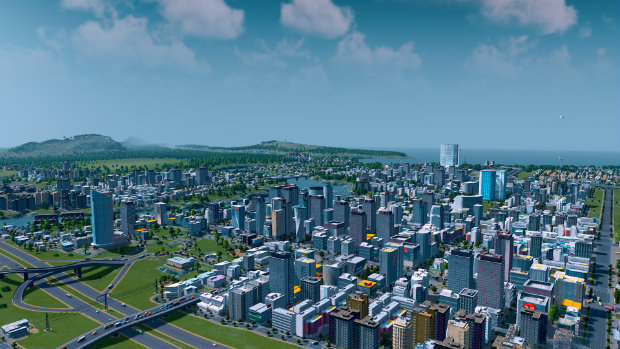 It’s impossible to avoid that Cities: Skylines stands on the shoulders of its predecessors. SimCity laid the foundation for modern city building games, and Cities: Skylines very much slips into the role that many of us felt that EA’s SimCity would when it released back in 2013. Sure it’s derivative of the SimCity formula, utilizing the trifecta of residential, commercial, and industrial zoning, single-player city building, and population-based goals, but Cities: Skylines executes those tropes more expertly than any other entry in the genre for the past decade.

You’ll play as the despotic mayor of a freshly built city, laying down the roads and zones using simple tools that will decide the eventual setup of your city. After placing roads, either residential, commercial, or industrial zones can be placed alongside them. Buildings won’t be able to function without water and electricity though, so some infrastructure laying pipes and wires will be necessary.

Players familiar with city builders will find Cities: Skylines easy to pick up, but anyone new to the concept will be eased in very slowly. Road building and zoning are introduced at a snail’s pace when you first boot up the game, but luckily players can skip the tutorial and jump straight into the meat of the action, though you’ll be missing out on an introduction to some of the neater features Cities: Skylines has to offer.

Areas can be zoned into districts, and each district can act almost like its own individual cities, separate from the surrounding areas. Maybe you want the citizens in the district with higher land values to attend school, while the lower-income areas go off to work in factories. Bleak, I know, but you can do it by zoning off your high class neighborhood, applying the education boost policy, and leaving the uneducated poor people behind.

Or, less bleak, you can require that the highly flammable industrial district have fire detectors in every building. It’ll cost you more per building, but it should help you sleep at night.

And districting off areas is basically necessary if you want to manage your city, because the area you have to play in is just so massive. You’ll start off in a 4 km square, but as you start to play you can acquire seven more equally large plots of land. There is plenty of room to play (and make mistakes) in Cities: Skylines. I haven’t even managed to fill up a full map yet.

Making mistakes plays a pretty large part in Cities: Skylines. I built my first city spanning a highway. I thought that keeping the industrial side of town across the road would keep pollution problems at bay — a noble, yet foolish, pursuit.

Smoggy air wasn’t a problem, but due to the dilation of time and my poor planning, traffic jams blocked the highway off ramps for several kilometers, making it occasionally take days for my workers to get to their factory jobs located just half a kilometer from their house. It was an absolute nightmare, and after many hours of play, I still can’t figure out the nuances of organizing a quality system for travel between districts, or even within a single one for that matter. Luckily, none of the difficulties of handling traffic (don’t even get me started on mass transit, which forces you to plot out routes in addition to placing stations) seem to negatively impact gameplay much. In fact, not much does.

It’s very difficult to lose in Cities: Skylines. As long as you keep citizens happy (which sometimes requires several graveyards within a few city blocks,) you’ll probably be in the green. There are no natural disasters to shake up gameplay or keep you in fear, so managing your city feels more like tending to a zen rock garden than constantly tweaking your policies to find out the best fit for your citizens.

It’s also pretty tough to lose approval with your citizens. Buildings constantly burning up and bulldozing homes to make way for wider road never seems to get your citizens down. The only thing that managed to get my residents saying anything other than praise on the game’s Twitter-like social media, called Chirper, was allowing garbage, sewage, or dead bodies to pile up on their lawns. Even if you do neglect your city’s bare necessities, as long as you get around to fulfilling them at some point, they’ll forgive you instantly.

Even with the gripes about relatively low difficulty and high traffic, Cities: Skylines is a blast. Stellar community support, along with immaculate integration through the Steam Workshop, ensures plenty of replayability. Finding that perfect suite of mods to make your own metropolis is a joy all on its own, and it’s easier than ever since you can turn them on and off individually from the title screen.

Loads of talented players have filled up the workshop with impressive cities for you to download (and ruin). I was even able to find the landscape of my small hometown in which to wreak havoc.

Cities: Skylines isn't without its flaws, but even the things wrong with it add to its charm. It might not be that much of a challenge, but it delivers on the glee of expansion.

Spencer Campbell has summited many mountains just to shout, “Video games are for nerds!!” After extensive scientific testing, he has concluded that they are. He plans on accepting his Nobel Prize as soon as the dorks in Sweden return his calls.
Related Articles: Cities: Skylines
Share
Tweet
Share
Submit