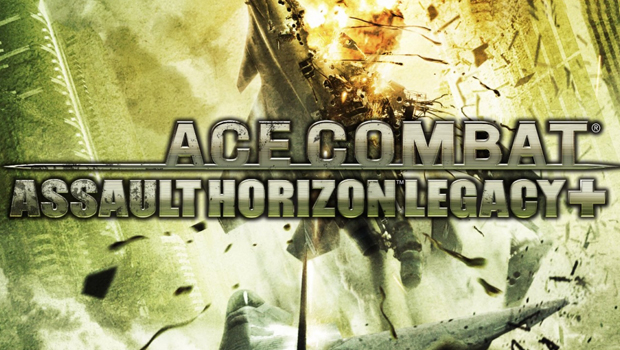 Piercing the sky in a state-of-the-art jet piloting towards your mission, you’re locked onto multiple airborne targets as you unleash a hail of missile-fire that reduces them into smoldering wrecks. I admit, Ace Combat: Assault Horizon Legacy Plus is as fun as it sounds and it looks wonderful on the New 3DS XL screen. With updated controls and additional Amiibo support for the latest Nintendo handheld, this re-release of the original 2011 title looks and plays better than ever. But despite the initial rush that this 3D arcade style, flight-sim-shooter can have at times, the thrill may be too fleeting and the experience too similar to its predecessor to warrant the new full price of admission.

Just as in the original Assault Horizon Legacy, a rebel force in the southern region of the USEAN continent has broken away from the alliance, threatening the stability and safety of the entire world. The player assumes the role of Phoenix, ace pilot to the USEAN Air Force and leader of the infamous Scarface squadron. It’s not an emotionally engaging story, and most of the plot is delivered via the talking head briefings that occur before and after each of the nearly two dozen missions. Despite the lack of tear-jerking scenes and dramatic revelations, the story does its job in motivating the action, which is really the true shining point of Horizon Legacy Plus.

It might sound difficult to pilot a jet going a thousand miles a hour amidst a dogfight whilst trying to maintain altitude, but Ace Combat: Assault Horizon Legacy Plus makes it feel like a walk in the park. The controls are as intuitive as they are responsive, and the process of honing in on enemy planes and dodging incoming fire is so slick that it’ll leave any gamer feeling as if they really are an ace pilot scourge of the sky.

Actually, the controls are so easy to use that they may take away from the overall enjoyment of the game. AC:AHL introduced a unique targeting and dodging system that allows for the execution of QTE aerial maneuvers at the push of the Y button once a designated gauge is filled. It’s a handy little feature and it does reduce a lot of the frustration from searching for your target, which would otherwise have been a chore of matching speed, distance and altitude. But once the assault gauge is mastered, the gameplay is reduced to little more than a process of getting near a target, holding course for a few seconds and pushing the Y button to appear directly behind the enemy with a solid missile lock. Again, it is fun, but it doesn’t leave much room for a variety of attack.

The graphics are hit or miss. Flying games have always presented themselves well on the 3DS, and this is no exception, especially if you’re now using the New Nintendo 3DS XL’s facial tracking feature. The depth of the objects looks great as you fly toward them, and even better when you’re flying through the fiery debris of an exploding enemy plane. The cockpit or HUD view is the best way to experience the 3Ds’ unique sensation of depth because of the way the space is differentiated between what’s in your plane and what’s flying around outside it. However the textures of landscapes are generally lackluster and leave something to be desired. Things like mountain ranges and enemy bases are convincing enough from a distance, but the jagged and patchy textures expand as you fly closer. And since a large portion of the missions involve flying low and up close, there are plenty of times when the poor graphics are highlighted in the forefront.

The sound design is exceptionally good, with actions such as flybys and gunfire sounding intense and impactful. The musical score surprisingly features an exciting blend of fully orchestrated and upbeat electronic pieces, far more elegant and cinematic than one would generally expect from a handheld title. The grandiose soundtrack, rushing 3D visuals and fast-paced dogfights work so well together that I’m almost willing to overlook the repetitive nature of the gameplay because, despite the repetition of engagement, it’s still just a whole lot of fun to blow up jets and bomb gunboats in 3D. But one thing that I am not able to easily overlook is the fact that this is a remake of a game from 2011, and it barely changes anything at all from the original title.

Honestly, the greatest fault that AC:AHLP commits is that it is essentially the same game as it was four years ago. The game is as good today as it was back then; the real question should be whether or not the addition of thumbstick camera controls and Amiibo support is worthy of brand new packaging and, more importantly, a brand new price tag. I would have to say no.

The right thumbstick camera control is a nice new feature and it makes sense to utilize the capabilities of the new 3DS XL, but it’s far from a game changer. Jet fighter sims are very forward focussed games, with most of the attention on moving your enemies directly in the line of your front-facing crosshairs. I hardly ever found the need to use the right thumbstick to examine my peripherals. The radar screen and the targeting arrow work well enough to keep me aware of my surroundings without the need to manually move the camera.

The most notable and publicized difference between this latest version and the original is the addition of Amiibo support. AC:AHLP is one of the few games currently available that is equipped to utilize the New 3DS XL’s unique Amiibo scanner. Now gamers can input a select assortment of their Nintendo plastic figurine characters, such as Mario, Luigi, Samus, Link and Donkey Kong into the game. Similar to the Amiibo implementation found in Mario Kart 8, Amiibo scans will unlock special jets for use in Ace Combat. For instance, scanning in a Link Amiibo figure will unlock an F14 Tomcat with a special paint job of the Link character pasted on top. It’s a fun feature, but it really doesn’t change much regarding gameplay. Most of the planes can be unlocked without the use of Amiibo support. I was able to collect the Mario, Princess Peach, Luigi, and Donkey Kong jets all in game and without a single scan, which did little to validate my continually growing Amiibo collection.

Ace Combat Assault Horizon Legacy Plus is a fun game that plays great on the 3DS even if it does grow repetitive at times. But Despite Namco having added a plus to the end of the title, not much has fundamentally changed. You’re still going to play through the same story missions with the same graphics and the same presentation as its 2011 predecessor. To be brutally honest, the minor additions of camera control and Amiibo jet unlocks feel less like a new full release deserving of a new price, and more like an update deserving of DLC. If you’re looking for some fast paced dogfighting action in handheld 3D, I suggest that you save yourself some money and buy the original title.

Ace Combat: Assault Horizon Legacy Plus is fundamentally the same enjoyable game as it was when originally released in 2011. This latest version adds Amiibo and thumbstick control for the New 3DS XL, but shortfalls such as repetitive gameplay and lackluster graphics remain unchanged. There's not enough new material here to warrant an entirely new release and the minor additions would be better suited as DLC.

Stefan started gaming the day his dad brought home a shiny, brand new commodore 64. He's been hooked ever since. Whether he's leveling up his ninja in Final Fantasy Tactics, cruising the streets of San Andreas or working on his Terran build order, videogames are never far from his mind. He is currently on the lookout for an appropriate 12 step program to address his electronic addiction.
Related Articles: Ace Combat: Assault Horizon Legacy Plus
Share
Tweet
Share
Submit