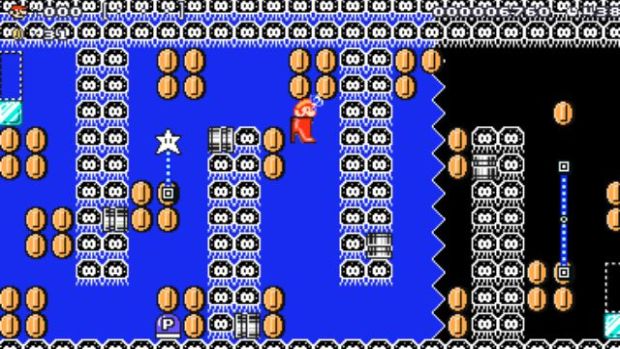 One of the surprise hits of last year, Super Mario Maker was able to connect with audiences everywhere by offering an easy to use toolset to create and share Mario levels. The game was a critical success, and found a lot of popularity across many demographics. Now, in an attempt to make that lightning strike twice, Super Mario Maker is available on the 3DS, but ends up as a poorly executed port with limited functionality and a lot of removed features.
Mario Maker’s level creator returns, and it’s as fun as it was last time. The controls are almost exactly the same as the Wii U version, as most of the level editor makes use of the touchpad to drag and drop blocks, enemies, and powerups into the level. While the small screen may look a little cluttered at first, it does a good job of conveying everything in an easy to understand way. You could easily hand your 3DS over to just about anyone and in a few minutes, they’d have a playable level for you to try. Also, most of the content that’s been added to the Wii U version of the game in later updates is playable, such as mid-level checkpoints. The only thing that I noticed was missing from the 3DS version were the extra costumes in the 8 bit Mario stages. Given that the game has neither amiibo support or event courses, this admission is understandable if a bit disappointing.

The level editor offers a lot of customization options while still being easy to use.

There’s also a rather robust “campaign” of sorts, which adds a total of 18 worlds of levels. The levels are fun, though geared less towards being a real challenge as they are demonstrating potential uses of the game’s selection of powerups, as well as the ways that each of the four different “games” differ. Still, they add a lot to do when you’re playing in an area where you can’t access the internet, and they’re also a good source of inspiration when you’re making levels. One minor annoyance with these levels, however, is that they’re constantly interrupted by tutorials, tutorials which, for the most part, players will find unnecessary. While the initial tutorials for the level editor and Mario’s controls can be skipped, these ones come at the end of levels and you’ll just need to mash A to skip through. As I mentioned before, a huge part of the game’s success on the Wii U was that it was so well designed, players could easily figure out what they were doing without the tutorials.
As always, Mario controls so smoothly, it’s almost second nature. The controls are great, and haven’t really changed at all since the Wii U version. It’s also pretty impressive the amount of content on display here, almost all of the tools from the four Mario games copied here (from the original Super Mario Bros, 3, World, and New) are present. When you get a good level that takes advantage of the different mechanics from the various games, it’s a lot of fun, and there are a lot of examples of creative puzzles to be solved, enemy combinations to stomp, and just a lot of fun to be had in general. Also returning are modes like the 100 Mario challenge, where you have a hundred lives to complete a set of user-created levels.

The Fire Koopa Clown Car, part of one of the Wii U updates, makes a reappearance.

One major blow to the game’s usability is that, for some reason, the search button in the Course selection has been removed. While the previous method was a bit of an annoyance, as it required you to find the codes for specific levels online before playing, it still feels like a step back to remove them all together. There’s actually no way to find specific levels in this iteration of the game, not even a general “best of” list from the Wii U version or a list of top creators. Instead, you just get a random list of levels, which greatly vary in quality, so if you were looking forward to playing levels from famous YouTubers or friends, you’d better hope you get really lucky. Fortunately, there is an option to save levels that you do like to play offline, which is a valuable feature on a handheld device that won’t always be connected to the internet.

While there’s no shortage of great levels, finding them is another story.

Another disappointment is the fact that players can’t upload levels to the internet, and you’re instead limited to levels created by Wii U players. Instead, you can share them over StreetPass, which means that you’ll only be able to share levels with people you meet in person. While that’s fine if you live in an area with a lot of people, like a city or a college campus, if you’re in a rural area you’re going to be pretty limited when it comes to who you can share your levels with.

Super Mario Maker 3DS is a subpar port of a great game. While a lot of the fun is still there, the lack of sharing and search features make for an overall inferior experience.