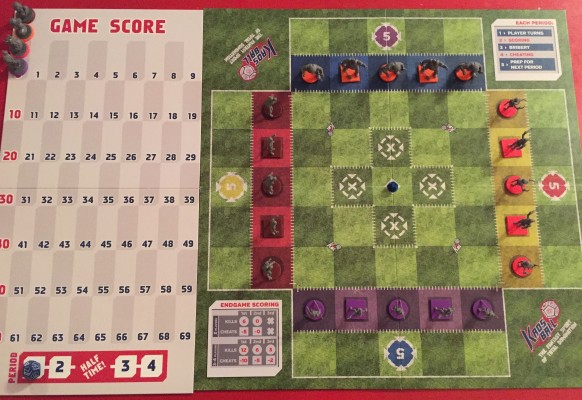 Bringing sports to board games has been a difficult proposition. The Strat-o-matic series allowed people to create their teams using real baseball players. 1st and Goal uses cards to call plays and dice to determine the yardage. Spring-loaded levers were used to pop a ping pong ball to try to make a somewhat realistic basketball game. However, most translations of sports to board games have been less than spectacular. One way to try to buck that trend is making a game about a made-up sport. One of the best examples is Blood Bowl. Where else can elves, orcs, humans, and goblins fight for a ball and score? Eric Lang has used that strategy with Kaosball, and the results are interesting.

The objective of Kaosball is to score the most points with the team you have. The field is shaped like an X, with a five-by-five square in the middle and two rows of five squares extending off each edge. Each team starts with five players, three runners and two brawlers, along each edge of the center five-by-five square indicated by the scrimmage line. In a two player game, the two teams face each other. In three or four player games, the Maximum Kaos match can be played where it is each team for itself. Alliance games are played with four players, with the players and teams sitting next to each other instead of on opposite sides. The ball is placed in the center, with each square touching it being a minor scoring square. Each team has a major scoring square located in the middle square behind the team on the opposite end of the field.

Each team is made up of Runners and Bruisers. Runners are fast and able to handle or steal the ball, while Bruisers aren’t able to handle the ball but are able to attack and tackle other players. Each player starts with seven Runners and six Bruisers in their dugout. Ringers are special players that can be purchased before the game starts that are like Bruisers with the ability to handle the ball. Ringers also gain any special abilities from cards or upgrades that are applied to the entire team. The Ringers are drafted before the game, and the number of Ringers in the draft is always equal to three plus the number of players. It’s easy to tell the three types apart by their base. Runners have a circle base, Bruisers have a square, and Ringers stand on a hexagon.

Each person is given twelve cash for exhibition games, or ten for league games, to be used for the drafts and in the game. Team upgrades are bid upon before the Ringer draft. The number of upgrades available is four plus the number of players, but Kaosball includes 24 upgrade tokens. While a couple of duplicate upgrades are included, enough are available that you won’t be seeing the same combination of upgrades every time. Upgrades include being able to move an extra space, scoring points for injuring or killing an opponent figure, taking handoffs from an additional space away, and being able to activate a player before the first player’s turn. These upgrades can be powerful, but you don’t want to spend all your cash before the game, as you might need it later.

Kaosball is played in four quarters. Once the teams are placed on the board, each player draws seven action cards. Most of these are energy cards used for contests when a player is trying to tackle, steal the ball, or attack. Some are Tactic cards, which are like one-time upgrades, but they can affect the field as well as the players. Cheating cards are incredibly powerful, and they list when they can be played, but if you cheat too much you can lose points at the end of each quarter. They can affect the game by automatically damaging team members or cancelling the effects of tactic cards, amongst other powers.

Each turn players score points, play a Tactic card or activate a player, draw their hand back to seven cards, and check if the quarter is over. When a team member is activated, it can sprint to move up to five spaces to make up the most ground and then try to steal the ball if they are next to the ball handler. Bruisers and Ringers have the ability to tackle or fight an opposing team member by moving up to three spaces. Tackling a player knocks them out until the end of the quarter, while fighting can cause damage and remove the team member from the game if they take enough hits.

Attempting to steal the ball, tackle, or fight a team member initiates contests. Contests are resolved by playing energy cards from your hand. These cards have a number on them, and sometimes a star. Tactics and cheating cards can affect cards with energy stars on them. During a contest, both players take a card and place it face down in front of them. They both reveal their card at the same time and then add their corresponding modifier on the team board. If there is a tie, the active player rolls the tiebreaker die and applies the value to their sum. I like this mechanic because it only affects ties and the die has values of plus or minus one and two on it. It also makes it possible for low-numbered cards to win, even if the other player has higher numbered cards. These cards are set aside next to your dugout as burned cards. If a player has nine or more burned cards, the end of period buzzer sounds and all other players get one more turn.

When in a contest, you play an energy card. You can play a tactic or cheating card if you want, but most of these cause you to lose automatically and is considered dead and considered as worth zero. If you play an energy card with the same number as an energy card in your burn area, that card is dead as well. If one player plays a dead card and the other a live card, the player that plays the dead card automatically loses. If both players reveal dead cards, then the stats on the team dugout are compared as if both players played a zero energy card. The way duplicate energy cards are handled can change your strategy and mitigates luck if someone draws a large number of high energy cards.

At the end of the period, Runners and Ringers standing on a minor scoring mound score as many points as the current quarter and a major score of five points if standing on their major scoring mound. You don’t need the ball to score at the end of the quarter. Then each player rolls the tiebreaker die for each cheating card next to the dugout. Rolling a plus one or two adds that many fouls to the team’s foul dial. These fouls accumulate throughout the entire game to a max of fifteen. However, before rolling the tiebreaker die, you can bribe the ref by paying one cash for each cheating card you want to discard. At the end of each half, bonuses are awarded to players for the number of kills they have, while penalties are taken for the number of fouls.

While it seems like there are a lot of rules, turns are relatively short. Games can take a half-hour to an hour depending on how quickly each player moves their team members. It’s recommended that you don’t use the draft the first time you play, but most gamers shouldn’t have an issue jumping right in and getting the full experience.

Kaosball comes with four teams and eight Ringers, each with slightly different stats. Some are well rounded and others have more specialized abilities. While you can play with these in different combinations for a while, Cool Mini or Not has thrown their full weight into the game and created several different expansions of both teams and Ringers. Recently, rules for leagues have been posted at the Kaosball website, which allows everyone to play a team whose strategy they enjoy using.

The figures look ridiculously cool. The intricate amount of detail for the team members brings them to life. While the other tokens don’t look as good, I like the fact that the ball tokens, first player token, and period token are d12, although the faces have nonsensical line figures instead of numbers. The fire tokens have pointy flames, while the damage tokens are shaped like skulls. It could have been easy to just use chits or cubes, but the tokens add to the flavor.

Kaosball has a lot of appeal. The rules aren’t complicated, turns go quickly, and the different teams add an amount of strategy that makes each game interesting. Enough teams are included to keep it feeling fresh for a while, while other teams are available to add to the flavor of the game later. If you like sports and don’t mind a little flair of fantasy mixed in, check out Kaosball.

While not working as a Database Administrator, Keith Schleicher has been associated with Gaming Trend since 2003. While his love of video games started with the Telestar Alpha (a pong console with four different games), he trule started playing video games when he received the ill-fated TI-99/4A. While the Speech Synthesizer seemed to be the height of gaming, eventually a 286 AT computer running at 8/12 Hz and a CGA monitor would be his outlet for a while. Eventually he’d graduate to 386, 486, Pentium, and Athlon systems, building some of those systems while doing some hardware reviews and attending Comdex. With the release of the Dreamcast that started his conversion to the console world. Since then he has acquired an NES, SNES, PS2, PS3, PSP, GBA-SP, DS, Xbox, Xbox 360, Xbox One S, Gamecube, Wii, Switch, and Oculus Quest 2. While not playing video games he enjoys bowling, reading, playing board games, listening to music, and watching movies and TV. He originally hails from Wisconsin but is now living in Michigan with his wife and sons.
Related Articles: Kaosball, Tabletop
Share
Tweet
Share
Submit