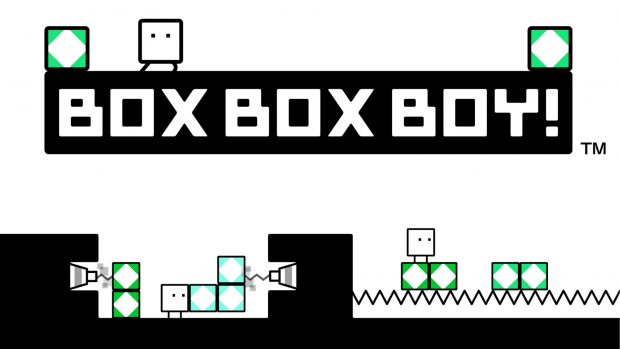 When I reviewed the original BOXBOY! last year, I praised the game for how it was able to build such complex puzzles out of a simple concept. Easy to learn while still boasting a satisfying difficulty spike, BOXBOY! was an approachable experience with a surprising amount of mileage to it. Thankfully, BOXBOXBOY! is an excellent sequel that captures that same simplicity while feeling like a natural extension to the original’s formula. In many ways it may only feel like more of the same, but BOXBOXBOY! builds upon its proven formula while retaining the simple challenge that makes it so appealing.

The goal of BOXBOXBOY! remains the same: create strings of boxes out of thin air so that the cubed-hero, Qbby, can reach the goal at the end of each stage. Levels play out as a 2D puzzle platformer and the challenge comes from finding the best solution for how Qbby should lay his boxes in order to advance; laying down a bridge to cross a chasm or building a set of stairs to reach a high-up platform are just a few of the recurring strategies that players will use throughout BOXBOXBOY!’s many levels.

Where BOXBOXBOY! builds upon the original, though, is in Qbby’s new ability of creating a second set of simultaneous boxes. Whereas BOXBOY!’s puzzles usually boiled down to finding the right shape to place a single string of boxes in, BOXBOXBOY! adds a whole new layer to the formula in how it requires molding two sets of boxes in tandem. Solutions in BOXBOXBOY! no longer feel one-and-done; coming up with multi-step answers by utilizing both sets of boxes together often creates much deeper, yet more open, opportunities.

Much like BOXBOY!, this leads to some surprisingly difficult puzzles. Early stages in BOXBOXBOY! will ease players into the concept of using boxes together, but the difficulty ramps up rather quickly. The opening levels consist of smaller puzzles, such as placing two odd Tetris-like pieces together to build a larger set of stairs, but by the third or fourth world in BOXBOXBOY!, complex puzzles will require complex solutions. Using one set of boxes to block off stationary laser beams, finding the right configuration of box strings to trigger multiple gate switches, and using a curved set of boxes to “hook” onto another are just a few of the more elaborate situations that BOXBOXBOY! puts you in. The opportunity for a second set of boxes creates some genius puzzle design and BOXBOXBOY!’s encouragement to plan out a solution several steps in advance is both devious and rewarding.

To that extent, BOXBOXBOY! once again succeeds at crafting a deep experience from a deceptively simple formula. Much like BOXBOY!, completing stages is never a matter of skill, but finding the most elegant solution to the game’s puzzles. BOXBOXBOY! is masterful in its ability to create intricate puzzles from such simple mechanics and I grew to have such an appreciation for them that I never felt frustrated by the game’s tougher challenges. BOXBOXBOY! is welcoming in its simplicity, yet still littered with plenty of those “aha!” moments that help it strike a great balance between being approachable and difficult.

Much like last year’s, BOXBOXBOY!’s old-school presentation is once again one of its most charming qualities. The visuals are simplistic in nature, with almost the entire game displayed in black and white and looking (and playing) like something that could have been seen on GameBoy in the ‘90’s. Not a game to push the power of the 3DS, BOXBOXBOY! is happy to present a delightful appearance that goes hand-in-hand with its straightforward gameplay.

The sound, on the other hand, is once again one of the game’s weaker points. While the midi-style music isn’t bad and is perfectly fitting for a game of this nature, the limited assortment between the level tunes left me wishing for an occasional shake-up. The slower-paced themes help set a great mood for thinking through the game’s puzzles, but I just wish I heard more than the same few selections throughout the majority of the game. This is definitely only a minor gripe, but was one where I wish there had been just a little more variety.

Aside from dozens of levels, BOXBOXBOY! also provides a solid amount of extra bells and whistles. Several hidden crowns can be found in every level, encouraging crafty players to revisit stages in pursuit of collectibles. Finding these crowns will earn you coins which can be used to buy numerous extras in the game’s shop, including a wide variety of fun costumes to play with, as well as comic strips that provide a charming laugh or two between levels. These are minor additions, but BOXBOXBOY! does pad out its gameplay with enough content to give the game a bit more replay value.

BOXBOXBOY! may ultimately feel like a retread of last year’s great puzzle platformer, but the new dual-layered approach to puzzle solving shakes up the gameplay enough that this feels like a more-than-worthy sequel. It doesn’t play much differently than the original, but the game’s charming presentation and brilliant puzzle design will immediately appeal to anyone who enjoyed Qbby’s first outing. More of the same, but with some new twists, BOXBOXBOY! is a game that plays just as straightforward as it looks, but when the formula is this solid, that’s perfectly fine.

BOXBOXBOY! ultimately feels like more of the same, but when a game is as charming and approachable as this is, that’s perfectly fine. Having a second set of boxes shakes up the formula just enough to squeeze even more life out of this simple and excellent concept.

Gaming Trend's resident amiibo collector, Matt's a lifelong gamer with a soft spot for Nintendo. As a new father, Matt often struggles to stay as involved as he has been in years past but can always be counted on to come back for some engaging geeky conversations. A resident of Philadelphia, he is currently working on building up his Man Cave with all things Marvel, Star Wars, and Video Games. As an old-school gamer, Matt firmly stands by his belief that gameplay will always be more appealing than story.
Related Articles: BOXBOXBOY!
Share
Tweet
Share
Submit