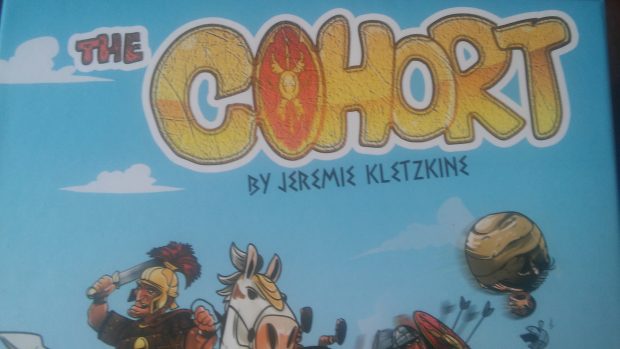 In the barbarian lands of Gaul, Emperor Caesar has called his armies to assemble. The Cohort casts you, the players, as generals gathering your troops to win his favor. Whoever collects their armies and gets them in line will have the honor of leading the first charge. Of course, the troops are cantankerous from their long march, you’ll have to deal with logistical issues, and they’re not the easiest bunch to organize and motivate.

I must begin with a brief disclaimer: this is a pre-Kickstarter release that I am reviewing. If you want to purchase this game you can’t, and the creators promise there will be some changes between now and the final product (mostly in terms of adding more cards). This is a review, not a preview, so I will be discussing the game as I have it and not the game as it may or may not end up.

The Cohort consists of a single deck of cards containing all the might and glory of the Roman legions. Shuffling this behemoth of before every game is a challenge to rival the conquest of Hispania, but setup is not as arduous as other games After the cards are shuffled,you can jump right into the game.

Oddly, turn order begins with the player who most recently saw a “peplum” movie. I had to look it up, as I suspect the vast majority of players will, to discover this term refers to sword and sandal films, or even those set in ancient Rome or Greece. While most of you likely have, they are not common enough that calling them to memory after looking the term up is not a minor chore, and one most people will have to go through.

The method of play is seemingly simplistic, but the true tactical challenge is buried under circumstance, timing, and intuition. On your turn you must draw two cards from the deck, examine them, and then choose one to keep for yourself while giving the other to a player of your choice. You may also play a card face up as part of a Cohort, or group of similar cards. Each of the seven types of cards, excluding  an extra Joker type card, has a number at the top right that indicates how many of those cards you will need to play before the cohort is complete. Once any player finishes three cohorts they win the game.

This giant stack is The Cohort, in all its cardboard glory

The trick of The Cohort comes from the fact that most cards you play have a weakness they assign to you until its cohort is complete. These weaknesses are increased the fewer cards are required to play into a cohort to complete it. A three card cohort might force you to play with your hand open while a five card cohort merely causes you to discard a joker, which you might not even have in hand. Even before considering other players, this design confronts you with fascinating decisions: will you focus on a single cohort and have greater tools at your disposal or try to diversify but weaken your options? Will you attempt to cripple yourself for a fast cohort or give yourself more room to maneuver while straying farther from the win condition?

Of course, you also have to consider the other players, who can see what you are going for, as they try to limit your options. Unfortunately, their ability to do so is too powerful; they can choose whether to give you cards at all and which you will receive, if any. Compounded with the fact that your maximum hand size is four and you can only draw one card per turn, your ability to plan long term is almost nonexistent. Finally, and maybe worst of all, any time a player completes a cohort they choose someone to discard their entire hand. The gameplay ends up significantly slower and more methodical than you would imagine, and I was constantly feeling I never had the tools to create a genuine strategy.

These, you will find, are every bit as stylistic as they are accurate.

Intentional or not, I am impressed at how the theme compliments the game. Managing troops is difficult business, and the more you try to deal with the more problems are going to cause for you. Their individual weaknesses will logically compound when you try to put them next to one another. Mage Company also did an impressive job of using proper terminology and artistic depictions of the troops, at least from what my meager historical research revealed.

The weaknesses troops provide you with are all interesting, though not balanced as well as they should be against the numbers required to complete a cohort. Because of the limited card types the variety of play is limited. The Cohort delivers on what it promises but does not go into more depth than that, and I am forced to feel there is a great game underlying what is only a good one.

The Cohort feels every bit the strategic challenge amassing a legion of troops on the field of battle should. It also has all of the frustrations, annoyances, and inconsistencies despite its successes, but these don’t bring the game down far enough to keep it from being a fun time.

John Farrell is a legal aid attorney specializing in domestic violence, living in West Chester Pennsylvania. You can listen to him travel the weird west as Carrie A. Nation in the Joker's Wild podcast at: https://jokerswildpodcast.weebly.com/
Related Articles: Tabletop, The Cohort
Share
Tweet
Share
Submit