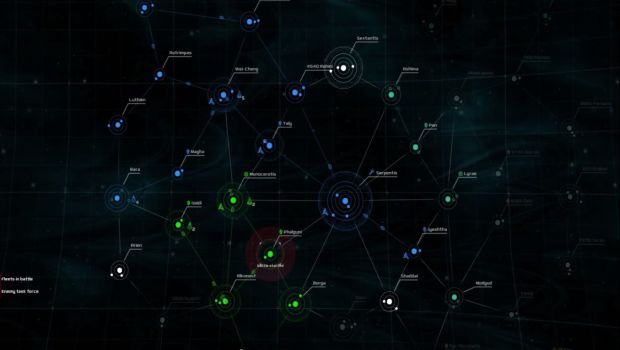 The Real-time-strategy genre in many ways represents one of the far poles of videogames, sitting across from the visceral in-the-moment combat of fighting games. They speak to a different part of the competitive psyche, and stand unparalleled in their capacity to exemplify the sense of utter victory. From the alternate, war-torn histories of Sid Meier’s Civilization franchise, to the immortalized institution of chess, the RTS is our modern avatar into the pressures and considerations that come with the title commander. Flow Combine’s Spacecom is an elegantly simple and intensely engaging addition to this long-standing history.

As far as the “why’s” go, Spacecom is not a game that a person is going to play for the story and it never advertises itself as such. You are a commander for the Sol Dominion, a far future conglomeration of planets, who is thrust into the low-gravity thralls of battle when a suspected terrorist attack ignites the fires of war. As you earn the respect and faith of your leaders through your har- fought victories, you’re placed in charge of larger expanses of territory, ordered to achieve more elusive goals, and forced to push back the enemies who seek to destroy you. Pretty straight forward.

As the game’s first few stages kick the tires of your strategic mind, the first thing most players are going to notice is this game’s bare-bones aesthetic. The flash and spectacle that many modern gamers may have come to expect in an RTS is nowhere to found here. Even the icons that represent your various units are only slightly altered versions of the same pizza-shaped wedges that stand in for your various fleets. This, however, isn’t an early sign of a low-budget experience to come, but rather an indication of a true strategic simulator. Distractions, even that of the slow, hypnotic troll of your icons across the board can quickly mean defeat if they pull your attention away from a colony under siege. The only thrills Spacecom wants you to focus on is that of the shifting tides of battle, and of that there will be plenty.

Whether it’s you versus the AI or other living opponents, all the units that will be available to you will be the same, primarily consisting of three different types of combat fleets. Battle fleets excel at ship-to-ship assault, Invasion fleets are necessary to capture enemy or neutral territories, and Siege fleets can raze defeated planets, making them unusable for anyone (Except for corpses I suppose). While all these units are purpose-built for particular functions, they can engage one another with varying efficiency, depending on the configuration. In example:

While your units will gain a type of experience from surviving multiple battles, making them more hardy and reliable to perform minor military miracles, learning the rock –paper-scissors of what-beats-what is at the heart of Spacecom. While in-game unit creation and deployment is part of the strategy just like any RTS, time is very much a critical factor and rarely on your side. Having to fight off several enemy waves while still waiting for one additional fleet to be produced is a common affliction, and one you will need to learn how work toward your advantage. Sure, maybe your four Siege fleets will peel apart like tissue paper while holding the line against six venerated Invasion groups, but if they can hold out for those few precious minutes while your primary Battle group finishes mopping up a prior engagement and races to their location, you may suddenly and violently claim a surprise victory (along with a strategy buzz… just saying).

The options don’t begin and end with fleet deployments, however. Different star system offer different benefits or limitations, varying how much (and more importantly, how quickly) they can be fortified, their wealth of required resources, and whether they’re a vital locale that must held at all costs or just a navigational junction for doing battle. All the systems in the game are linked via “lanes” which are essential for directing your fleets throughout the cosmos and ferrying supplies. Capturing, obstructing, or even pirating these trans-galactic freeways is as much a part of being victorious as having the dominant fleet in the area. Fleets on the move must pass through systems in order reach their destination, and even if there is only one enemy vessel between them and that location, they must stop and engage. This makes attrition a very real and functional strategy in the game, so much so that ships that are even just orbiting enemy control planets take regular “attrition” damage until they either conquer the world, depart, or are destroyed. I know I lost many a fleet when after I took down an enemy battle group in a foreign system, I shifted my attention away to another engagement, only to look back and see my once victorious units vaporized.

But, even if it was only a passing thought, do not mistake simple for easy. If you’re slow to pick up even the early lessons the game is willing to share with you, just the tutorial sections of this game will quickly flatten you or shame you with a frustrated “click” of the surrender option. This game’s beauty is found in its minutia, and the flexibility a clever mind can carve out of its few rules. No two battles will ever go the same, and thinking ahead as far as possible is the only thing that will weed the weak from the strong. Sacrificing a planet to choke enemy supply lines, baiting your enemy with well-timed feints or changes to your fleet’s course, or even the classic massive attack with dozens of units is all possible here if you are  willing and able to learn Spacecom’s finer points.  As a great strategist once said, “a footprint doesn’t look like a boot,” and Spacecom may not appear much fun as it really is.

Spacecom is a super-fun strategy game, and a truly unpretentious take on the RTS genre. The minimalist approach, patient and finely honed execution, and truly limitless amount of replay value that combination offers is something rarely seen in an era so overwrought with style-over-substance entertainment. This game is a must-buy for any RTS gamer, and a definite recommendation to anyone who enjoys real strategic competition. Even without the dramatic music and showboating spectacle that can make other titles of this type a real hoot to play, it’s examples like this that really speak to the Hannibal, Patton, and Ender in all of us.