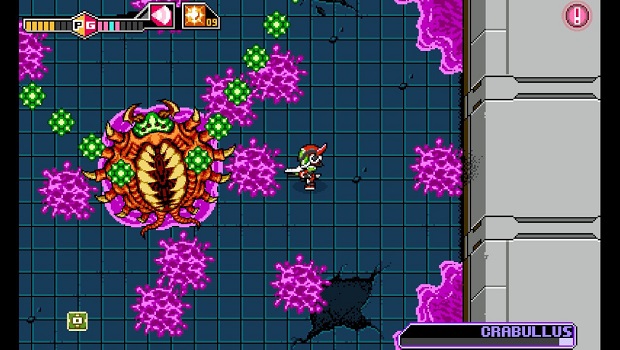 It seems like the retro revival is in full swing for the Switch; with titles like Super Bomberman R currently out and Sonic Mania on the horizon, it looks like old school gaming with a fresh coat of paint is exactly what the doctor ordered. Among this list is Inti Creates’ Blaster Master Zero, a reimagining of the 1988 classic Blaster Master. Filled with Metroidvania-inspired elements and a great pixel art style, this slick retread is the perfect introduction to the franchise.

Blaster Master Zero takes place in the distant future, on a planet overrun by mutant creatures after an ice age forced humans to live underground. Jason is an engineer who comes across a frog he names Fred. One day, Fred disappears, and Jason tries to find him with his trusty vehicle Sophia III. Along the way, he meets a mysterious girl named Eve, and the two work together to try and rid the mutant menace from taking over the galaxy. The story, which is remarkably different from the original, is just icing on the cake to the gameplay within.

What kind of bird is this?

The main game is divided into two different gameplay stages, with one emphasizing Sophia III and Jason respectively. When you’re driving Sophia III, you’ll be tasked with traversing eight different areas in order to upgrade your vehicle. Like a Metroidvania game, you’ll be grossly underpowered when you first begin, so you’ll have to fend off enemy fire or run in order to avoid  dying early in the game. By moving through dungeons, you can also grab map pieces, which will mark other dungeon stages as well as points of interest. Once you pick up some upgrades in the middle of the game, however, these stages get relatively easy until the endgame.  You may need to backtrack once you get more powerful upgrades, but thankfully the game doesn’t make you do this a whole lot.
These overworld levels are decently challenging, with a horde of mutants ready to pounce on you at any given time. However, once you grab a few secondary weapons, disposing of them is a cakewalk, and the only things I needed to worry about were the environmental hazards. I think the only main drawback to these levels is the fact that by default, Sophia III’s handling is pretty slippery. There were a few times where I hit enemies or missed a jump because of the slippery controls, However, this is alleviated later in the game with an unlockable hovering ability, so it isn’t too frustrating. You can also get out of the ship with Jason in order to crawl through otherwise unreachable nooks and crannies, but this isn’t recommended unless absolutely necessary, because Jason’s default peashooter can hardly affect any enemies in the overworld, and he will die if he falls from almost any height.

On the other hand, you have dungeon stages where you control Jason, which act like a top-down run-and-gun à la Smash TV. Jason controls differently, as you can shoot in all directions with his levels. Upgrades work differently as well: as he collects pink power-ups, Jason can go from a peashooter to a wave gun within eight levels. However, being hit will decrease this level, so if you want to play with power, you need to learn how to dodge correctly. Alternatively, you could grab the power-up that ensures that Jason can take a hit without losing his blaster level, and it replenishes after a few seconds.

I enjoyed these stages since they demonstrate the “Blaster” part of Blaster Master Zero quite well. While I dominated many of the enemies with the final level wave gun, there were still uses for lower levels of my blaster (such as a flamethrower that came in a pinch when I was in an ice area), so it was fun experimenting with the other weapon types.

Even Inti Creates acknowledges the fact that we need another Metroid.

Both types of stages have boss battles, which aside from a few exceptions, are pretty straightforward. I did prefer the Sophia III bosses to Jason’s since all it takes for most of them are a few dozen shots from the wave gun with the latter. Sophia III’s boss fights revolve around dodging the area while finding a balance between shooting and getting out of the way. It’s a nice change of pace, and the boss designs for both types were unique and grotesque.

While the game is technically a remake of the original, Blaster Master Zero sports a very nice 8-bit aesthetic, rivaling Shovel Knight in its style. The stages look like those of a Metroid game, and later areas capture the unnerving tone of the setting perfectly. I actually was a bit disturbed by the final areas of the game, since they emulated the horror of the situation with its hazards and enemy types. The soundtrack is serviceable, and I didn’t really find fault with it. It wasn’t remarkable in scope, but I didn’t mind fighting the boss with the same loop of music.
By default, the game is vastly easier than the original Blaster Master, in part due to the variety of upgrades you can collect. What’s great about this, however, is you can turn them off at any time for a self-imposed challenge. If you don’t want the game to hold your hand, for instance, you can turn off the transmission receiver and figure out where to go by yourself. You can also turn off the power-up to retain blaster levels when getting hit once, which will make you think twice before going all Leeroy Jenkins on a wave of enemies. It’s this accessibility that will appeal to newcomers and veterans alike.

One of the better boss battles on foot.

Other than the somewhat slippery control scheme of Sophia III, however, one of the bigger flaws with the game is its lack of replay value. A single playthrough will clock in around 6-8 hours (more around the eight-hour mark if you’re aiming to grab all the upgrades and map pieces in order to unlock a secret ninth area and true ending). If you do end up obtaining the true ending, there’s a new game plus that starts you off with an overpowered vehicle, but once you get it, it’s more of a bragging rights reward than anything else since you already have every upgrade unlocked. It’s the perfect length for its $10 price tag, but it’s a one-and-done type deal.

A re-imagining of the 1988 NES title, Blaster Master Zero is a great game for anyone looking for classic 8-bit action. Its accessible difficulty and superb retro graphics make for a wonderful addition to the Switch’s library.

Elisha Deogracias is an aspiring accountant by day, freelance writer by night. Before writing for Gaming Trend, he had a small gig on the now defunct Examiner. When not being a third wheel with his best friends on dates or yearning for some closure on Pushing Daisies, he's busy catching up on shonen manga and wacky rhythm games. Mains R.O.B. in Smash. Still doesn't know if he's a kid or a squid.
Related Articles: Blaster Master Zero
Share
Tweet
Share
Submit