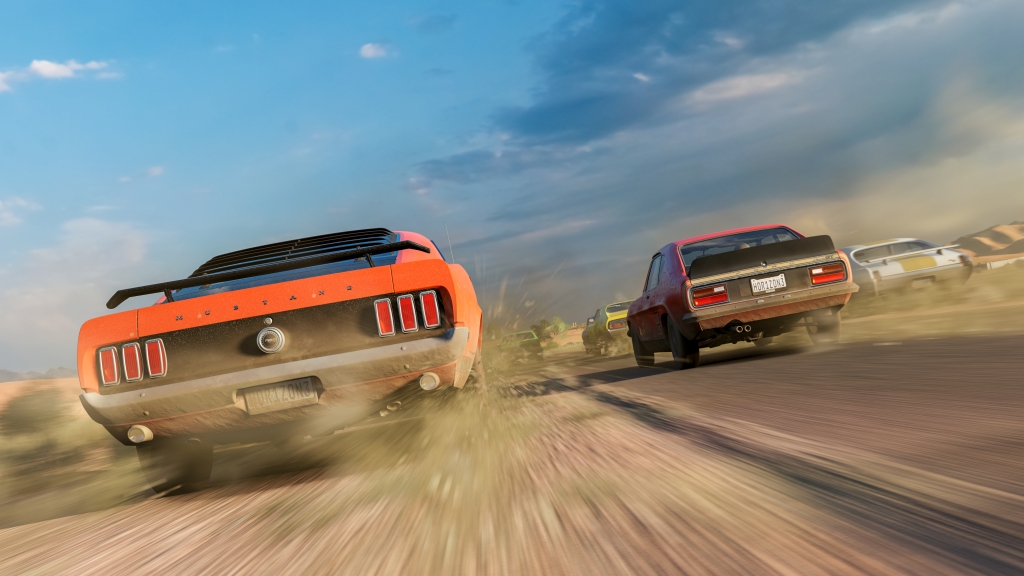 I called Forza Horizon 2 “Easily the best racer I’ve played in the last decade,” in my review, leaving Playground Games a tough act to follow. An incredible amount of content, over 200 cars, non-intrusive multiplayer, and some of the best arcade action on any platform had me singing Forza Horizon 2’s praises for the next two years. It’s once again time to head to the Horizon Festival, and there is so much more under the hood this time around.

While Forza Horizon took place in Colorado, and its sequel took us to Europe, Forza Horizon 3 takes us the exotic continent of Australia, complete with its sprawling cities, lush, green rainforest, and dusty, red desert Outback. It is no small feat that Forza Horizon 3 is twice as large as its already-massive predecessor. To fill that extra space, there are now over 350 cars on offer, including all new vehicle types. Racing Buggies like the Ariel Nomad, Trophy Trucks including the Baldwin Motorsports #97, and, since we’re in Australia this time around, a long list of Utes like the 2014 Ford FPV Limited Edition Pursuit or the 2016 GTS Maloo and 1974 Holden Sandman HQ Panel Van are just a scratch of the incredible roster on display.

Check out the Pursuit Ute!

It’s your festival
In Forza Horizon 2, you were backing up Horizon host Ben Miller as he built his car racing Festival, but in Forza Horizon 3, you are the boss. This means you’ll determine your race team, pick the radio stations, determine the race sites, and pretty much everything in between. Permeating every bit of the game, this iteration is all about personalization and customization.

The customization begins when you pick what your character looks like, but that’s just the tip of the iceberg. You can also select from a huge list of nicknames — it’s cool having the game call me “Dragon”. Car customization is back, but now you can put on wide body kits, customize your license plate, and even build your own races courtesy of the Blueprint feature.

While its brother, Forza Motorsport, covers the gearhead crowd, the Horizon series is every bit arcade. You can crash your car and rewind time to make another attempt at that difficult pass or turn. Flipping your car at over 250 miles per hour causes cosmetic damage, but has no effect on racing. There are a half-dozen difficulty levels that turn off assists like the augmented reality arrow that helps you hit the right speeds, or even the rewind feature. Horizon never takes itself seriously, and that’s one of the best parts about it.

Yep — you can drive a Halo Warthog.

Horizon Blueprint lets you create your own races, including drift challenges, sprints, speed traps, and all other gameplay types present in the game. You can set the number of laps, time of day, types of cars, and pretty much anything else you might want, and then race it yourself and share it with friends. You can even unlock and choose between dozens of horns — I roll with La Cucaracha in my quarter of a million dollar car to keep it classy.

Horizons 1 and 2 both had fantastic soundtracks, and Forza Horizons 3 maintains that with eight stations you’ll sign to your Festival as you level up, but if you want to drive to The Devil in I by Slipknot, then you’ll be interested in the Groove Music integration. You can either drop your mp3s into OneDrive, or you can take advantage of the 30 day trial for Microsoft’s music service, expanding the soundtrack to fit everyone’s tastes.

This time around, there are some new goodies beyond the bevy of new cars and landscapes to carve it up. There are Danger Sign jumps (shooting for maximum distance), Drift Zones, and you can build Convoys. By simply tooting your horn at passing Drivatars (the AI representation of other drivers), they’ll fall in behind you, creating a racing line. Occasionally, they’ll even challenge you to a quick race to a nearby landmark, lightly encouraging the player to explore off the beaten path a bit.

Many of the races, especially the city-based ones, have some sort of guard rail system to keep you from running too far afoul of the course. This time however, there are some illegal street races to tackle, letting players engage in the most forbidden piece of car culture. These races are on open roads with traffic and no guard rails. Bring your A-game…you’ll need it.

If you enjoyed the Bucket List items from Horizon 2, you’ll be happy to find that they’ve returned for Horizon 3. There are some difficult challenges, and some that are just flat out fun. Some are skill based, asking you to hit a certain combo amount, and one puts you on one end of the flightline and asks you to steel your nerves in order drive a supercar at over 250mph. They are a great break from the action, and many of them are real nail-biters.

I’m getting a Woody!

Showcase events are back and as brilliant as ever, pitting you against a jeep (being carried by a helicopter!), a fleet of speedboats, a dirigible, a freight train, and more. Each race crazier than the last, and they continue to be the highlight of my Horizon experience.

Welcome back to the Auction House
With a nod to Forza Motorsport 4, Forza Horizon 3 features an auction house. Players can sell vehicles to other players, with an eBay-like bidding/buyout system. With over 400 cars in the game, there’s a good chance you’ll be visiting to pick up your favorite ride at some point in time.

An Online Adventure, at your leisure
Multiplayer was an asynchronous event in Horizon 2, but the team at Playground Games wanted to take it to the next level. Now you can set up drop-in / drop-out cooperative play with three other players, giving players a chance to battle it out to see who is the best, not just squaring off against their Drivatars. It isn’t a walled garden, nor is it a fenced-in sandbox — it’s the whole massive 488-road-large playspace. It’s seamless, and it just works — something that few racers have gotten right to date.

There is also a filter system, allowing you to select the type of events you’d like to tackle with your friends. The best part is that your race results, credits, XP, progress, and everything else carries over to the single-player campaign.

Racing an entire boat team? Sure, why not!

The game will keep you busy for quite a while. There are 63 Championships, 63 Exhibitions, five showcases (with multiple upgrades for each), and more side mission content than you can shake a stick at. Every time a the player expand their showcases, a new shower of content pours forth. To put this in perspective, after more than a dozen hours of play, I had barely cracked 10% overall completion.

The best use of friends, I found, is the ever-present Barn Finds. As illusive as before, Barn Finds contain ridiculously rare vehicles, but finding them becomes somewhat easier when four players can swarm a space to uncover them.

If you don’t want to try to spot events and barns with friends, you can use the new drone system. Flying a quadrotor drone, you can zip above the landscape, dropping your finds as icons on the map. Spend some skill points and you can use your convoy to do spotting for you as well — handy if you don’t want to purchase the real-money treasure map that uncovers the whole shebang.

If you’ve not noticed yet, the theme of Horizon 3 is that it is far less prescriptive this time around. You can ask ANNA, your AI voice-activated companion, what to do next, but that’s really up to you. You can upgrade the individual Horizon sites to get new challenges appropriate for the space (street races in the city, cross-country in the deserts), build your own races, challenge your friends, or recruit them — Forza Horizon 3 is racing done your way.

What about Windows 10?
Forza Horizon 3 is one of the first titles to use cross-saves and cross-purchase between Windows 10 and Xbox One. While this feature was not quite ready to test, I’ll update this review as soon as that functionality is live.

Forza Horizon 3 feels familiar with its already-polished gameplay, but the new setting, cars, and incredible customization options opens the throttle on an already-fantastic platform. The team has built on an already stable platform, bringing entirely new ways to play. I struggled to find a single thing I didn’t love about Forza Horizon 3, and that’s a fantastic problem to have.

Ron Burke is the Editor in Chief for Gaming Trend. Currently living in Fort Worth, Texas, Ron is an old-school gamer who enjoys CRPGs, action/adventure, platformers, music games, and has recently gotten into tabletop gaming. Ron is also a fourth degree black belt, with a Master's rank in Matsumura Seito Shōrin-ryū, Moo Duk Kwan Tang Soo Do, Universal Tang Soo Do Alliance, and International Tang Soo Do Federation. He also holds ranks in several other styles in his search to be a well-rounded fighter. Ron has been married to Gaming Trend Editor, Laura Burke, for 21 years. They have three dogs - Pazuzu (Irish Terrier), Atë, and Calliope (both Australian Kelpie/Pit Bull mixes).
Related Articles: Forza Horizon 3
Share
Tweet
Share
Submit