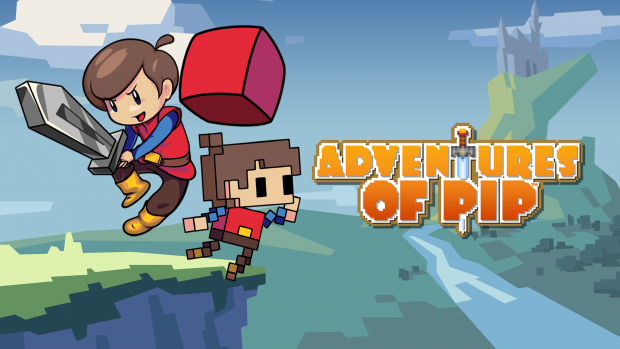 It seems like games with old-fashioned, pixelated graphics are increasingly common these days. Games like Axiom Verge, Shovel Knight, and Super Time Force Ultra all feature old-school visual styles which aim to convey feelings of nostalgia for gaming’s simpler days. But while all of these titles succeed in creating a retro experience, their low-resolution appearances are ultimately just cosmetic, rather than factoring into the gameplay itself.

Adventures of Pip is a game that changes that. Featuring those same pixelated visuals that are admittedly losing some of their novelty, Pip is a game that actually builds its entire experience around embracing gaming’s progression of visual styles. While not always perfect, Adventures of Pip is a title that is not only hugely charming, but succeeds at creating an adventure that makes great use of its theme.

The society that is illustrated in the game is one of great disparity. Citizens of various resolutions occupy the world, but there is cultural turmoil among social classes. Those with the highest resolution are often seen as the folks who have the greatest power and respect, while characters with fewer pixels are looked down upon as lower-class peasants. The inhabitants in Pip’s world won’t ever openly admit that some groups are treated differently – some even deny being “rezist” – but there is definitely a comical overtone to what is essentially a caste system for video game sprites. It’s all delightfully silly and over-the-top, but represents a game that is not afraid to have fun with its theme.

When the evil Queen DeRezzia arrives in the kingdom, she kidnaps the game’s princess and casts a spell on the King and Queen, reducing their resolution and turning them into pixels. The task then falls upon Pip, an unlikely hero who consists of just a single pixel, to rescue the princess and restore the land to its original resolution.

At its core, Adventures of Pip is a 2D action platformer. Players will guide Pip through over 30 levels, featuring standard platforming fare, like precise jumps and enemy fodder, to reach a goal at the end of each stage. Where the game differentiates itself, though, is in how Pip evolves during the course of the game. Pip starts the game as just a single red pixel, but soon learns that he has the ability to absorb the pixels of certain opponents he defeats, becoming a hero with greater resolution and abilities.

Mastering Pip’s various forms becomes key to progressing, as each stage of Pip’s evolution comes with its own strengths and weaknesses. At his lowest resolution, Pip has no attacks at his disposal, but is able to jump higher than any other form, and is able to float on his way down, making this the ideal form for tricky platforming. The next stage sees a humanoid, yet still pixelated Pip gain the ability to punch and perform wall-jumps, while sacrificing the potential to reach certain areas that the smaller, more nimble Pip was able to. Further forms continue to give Pip new abilities, while simultaneously highlighting some new weakness, so players must always think critically as to which of Pip’s forms works best for each puzzle. The end result is not unlike Super Mario Bros., with Pip’s evolution acting as a substitute for a fire flower Mario that is able to smash blocks with his fist and shoot fireballs; the later stages are admittedly more powerful, but even little Mario has advantages in certain situations.

The platforming can be somewhat of a mixed bag, however. While totally competent, I found that the movement felt a little off when requiring precision. Perhaps it was due to the fact that jumping felt a little weighted and stiff, with no real inertia acting on the player to keep momentum. Landing on target was occasionally just not as fluid as it could be. Coupled with some sections where precision or speed become crucial and it becomes slightly more frustrating. It’s by no means a major issue – I never felt cheated by the game’s blocky movement, nor do I think any deaths were caused by them — but it’s definitely worth noting that longtime platforming fans may notice a small learning curve to adjust to Pip’s movement.

Adventures of Pip is a great example of a game that takes a simple formula and spins it on its head with a fun theme. Pip’s world, with all of its cheeky humor and endearing presentation, creates a charming experience that is refreshing to play. The mechanic of a protagonist that can move through various evolutionary stages suits the game well, and while the platforming might not always be perfect, Pip’s forms are used in clever fashion. It doesn’t always succeed from a gameplay perspective, but its tendency to have fun with its theme makes Adventures of Pip a pixelated pleasure.

Adventures of Pip is a charming experience that embraces its pixelated appearance. The platforming can feel occasionally stiff, but Pip succeeds the most when it’s not afraid to have fun with its theme.

Gaming Trend's resident amiibo collector, Matt's a lifelong gamer with a soft spot for Nintendo. As a new father, Matt often struggles to stay as involved as he has been in years past but can always be counted on to come back for some engaging geeky conversations. A resident of Philadelphia, he is currently working on building up his Man Cave with all things Marvel, Star Wars, and Video Games. As an old-school gamer, Matt firmly stands by his belief that gameplay will always be more appealing than story.
Related Articles: Adventures of Pip
Share
Tweet
Share
Submit