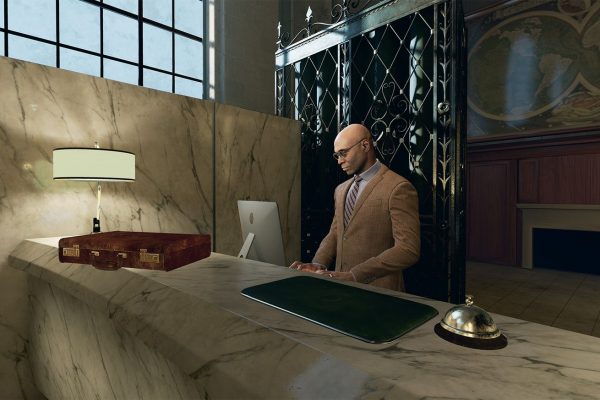 The John Wick movies are pure adrenaline-fueled action, mixing martial arts, gratuitous gunplay violence, and a slick cinematography that keeps you invested in the gore and grit. It’s also very difficult to translate to a videogame experience, and even more challenging to make into a virtual one. While zipping around at impossible angles, twisting bad guys into pretzels to eject brain matter this way and that isn’t going to happen here, developer Starbreeze has instead focused on making a serviceable arcade style shooter that tries to capture the feeling and body count of the series. I was eager to see if this was going to be a fresh take on bullet-slinging madness, or just another fish-in-a-barrel simulator.

John Wick Chronicles (Formerly known as John Wick: The Impossible Task, John Wick: An Eye for an Eye, and John Wick: The VR Experience) is based more on the freshly-released second movie (as evidenced by a wall-sized trailer for the movie that plays in your suite at the Continental hotel), without spoiling anything of importance. Long story short, John is back to his old ways, haunting the world of hired guns and paid assassination, Baba Yaga personified. Tasked with taking out a target, he makes his way to the neutral ground of the Continental hotel. From here, the game unfolds.

A familiar face greets you at the Continental.

Your first stop is a refresher on gunplay. Heading down to what looks like an abandoned subway area or something similar, you can pick up a pistol and start to knock the rust off your murder skills by popping some paper targets. The targets themselves have little bright dots to help you learn where enemy weak spots are, how to take out shielded targets, or how to take down hostage takers without unnecessary bloodshed. With that behind you, it’s time to take on your first level.

The game is set up like an arcade shooter. If you only completed the pistol shooting in the range, you will only have a pistol and grenades to take on your enemies. Spending the time to unlock the assault rifle and the submachine gun would be wise. Standing behind the series signature car, you can pop the trunk to use as a shield. As enemies pour towards you and take cover, you’ll mow them down however you wish. What surprised me was just how much of a workout all of that really is.

Much of real-world combat shooting is about proper stance, weapon control, reloading technique (props to the John Wick movies for the correct use of the Center Axis Relock stance), precision, and cover. John Wick Chronicles, being more of an arcade experience, focuses heavily on the latter. Throughout the three levels offered, John has to cut down dozens of enemies, but those enemies will be slinging lead back in his direction. There are cover elements everywhere (barricades, car trunk, planter boxes, etc.) but that means moving around and getting one hell of a leg workout as you squat to clear the line of incoming fire. In the second level a helicopter unleashes a minigun from an angle above you — it’s time to burn those legs in a deep squat! The game uses Room Scale VR, but I wanted to try things out in a small space and see how the game adapted.

This guy? He’s not your friend.

Using a space of about 3’ by 3’ instead of the recommended 10’ by 10’, I was surprised at just how well the game worked. I was still able to take out enemies, move around a bit, and be effective. The only difficulty came from the infrequently-tossed grenades. I took those as a personal challenge as I dropped my pistol and took special care to catch them mid air instead of trying to chase them on the ground to throw them back. Expanding out to the recommended 10’ by 10’ space allowed me to make better use of the environmental cover. It wasn’t necessary per se, but it certainly made dealing with the aforementioned helicopter easier when I could hug up close to cover to stay safe.

If there is one word to describe John Wick Chronicles, it’d be ‘difficult’. The game is relentless with the constant barrage of enemies, and they can and will kill you often if you aren’t making use of cover. They aren’t procedurally placed, however, meaning you can eventually memorize their patterns and take them out before they get to you. Occasionally, enemies will drop a goodie to help you with your assault. This can be a scope that gives you thermal vision, laser sights for your submachine guns, health packs, or body armor. They don’t stay in the environment for long, so grab them while you can, but they can tilt the odds in your favor.

I want to take a moment and talk about an experience I’ve not had in VR that John Wick Chronicles captured perfectly. If you’ve ever used a long rifle with a scope, you know that putting your eye too far from the lense makes the exit pupil very small. As you move your body into proper eye relief position (the proper distance to see and not have the scope pop you in the eye with recoil) , that pupil seems to ‘open’ until it fills the entire scope. This is handled nearly perfectly in John Wick Chronicles, and it was an absolute joy to play with. It meant that, while using the Vive controllers, I had to use one hand on the trigger and the other to steady the rifle, then pull it to the right position to make my shot. It sounds cumbersome, but it is in fact very intuitive and works remarkably well. While most of the time you’ll be unleashing a torrent of lead at your enemies with the other weapons, the times you get to use the long rifle are a real treat.

Another highlight comes courtesy of actor Lance Reddick who reprises his role as Charon – the front desk man from the Continental. He welcomes you back to the hotel, provides feedback to you during missions (with some voice repetition, of course), and puts up with your VR nonsense as you reflexively flick things at him during check in. It adds an air of authenticity to an otherwise forgettable antagonist, scores of faceless foes, and an unsurprisingly silent protagonist.

You’ll learn to hate this chopper. He will punish you with squats.

I did run into one consistent issue with John Wick Chronicles — it doesn’t want to quit. I was never able to successfully exit from the game without using Task Manager to end the process. It’s not a huge deal, but when you are bouncing from one VR game to another without exiting the headset, it’s a nuisance.

Once I completed the game, I felt like there were a few things missing here. The first and foremost is the close quarters battle that the John Wick movies are known for. John frequently twists his foes in knots, bracing their head with his foot to send their brains into the nearby wall, or reverses a hold before putting two in their chest and one in their head (aka Dozier Drill). That on-screen blinding action is just lost here. While I didn’t expect to be rolling on the floor and executing jiu jitsu mid-air, it does mean that John Wick falls back to a more predictable shooter where volume of bullets trumps slick stylized execution. The second missing element was one presented in the first training area — hostages. They make a big deal about lining up a precise shot to take out a hostage without killing civilians, but there are no civilians anywhere in the game. Everyone you see is out to kill you, and you are meant to kill them right back. Similarly, you’ll use placeable cover on the second level, but never again. It’s as if Starbreeze had some additional ideas they wanted to work out, but couldn’t get it across the finish line before the movie’s premiere.

Beyond the arcade-centric mode is one entitled Simulation. You unlock this and two additional difficulty levels by completing the game. The big difference here is that the arcade elements (automatic reloads, self-cocking shotguns) go away. Having to realistically reload and action the weapons is interesting, but again I found elements that were clearly intended but not implemented. You can grab the charging handle on the submachine gun, but there was never a scenario where my gun jammed to make it necessary. Similarly, you can pull the slide back on the pistol to see if you have a round in the chamber, but other than for authenticity sake, there’s little reason to do so.

I am very happy to report that, despite several hours of gameplay, I experienced no nausea whatsoever with John Wick Chronicles. Despite the movement in the space, and the high-speed action, I never had any moments where the game caused me any discomfort or issues. It’s nice to see something this fast-paced deliver a nausea-free experience.

John Wick Chronicles feels like the start of something great that didn’t quite button up all of the intended elements before it launched. More maps would do wonders to expand the gameplay, as would inclusion of some of the cooler elements like weapon jams and hostage situations. Highlights like the sniper rifle make it worth a nod, but I’d recommend catching this on a sale due to the short runtime of just three levels. It’s a solid wave-based shooter, but expect more arcade action than gritty hard-boiled realism.

Ron Burke is the Editor in Chief for Gaming Trend. Currently living in Fort Worth, Texas, Ron is an old-school gamer who enjoys CRPGs, action/adventure, platformers, music games, and has recently gotten into tabletop gaming. Ron is also a fourth degree black belt, with a Master's rank in Matsumura Seito Shōrin-ryū, Moo Duk Kwan Tang Soo Do, Universal Tang Soo Do Alliance, and International Tang Soo Do Federation. He also holds ranks in several other styles in his search to be a well-rounded fighter. Ron has been married to Gaming Trend Editor, Laura Burke, for 21 years. They have three dogs - Pazuzu (Irish Terrier), Atë, and Calliope (both Australian Kelpie/Pit Bull mixes).
Related Articles: John Wick Chronicles, VR
Share
Tweet
Share
Submit