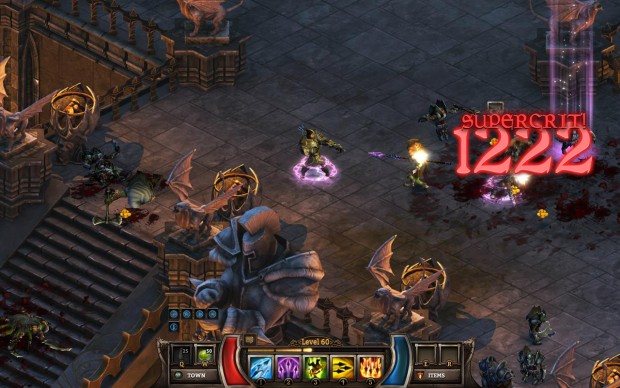 There are two classifications of games that I roundly ignore — free-to-play, and browser-based games. With the opportunity to review a game that ticked both of those boxes, I thought I would sprain an eyeball with the rolling.

KingsRoad is a free-to-play multiplayer game that looks to take the ideas of a great many games, incorporate them, and produce the best iOS/Browser game to date. From what I’ve seen, it looks like it certainly hits close to that mark, even if it doesn’t quite convert me to the cause.

Clicks and Taps
KingsRoad functions, surprisingly, equally well on browsers or on iOS devices. I first tackled this on my iPad Air. The game is incredibly simple, whether you are using a mouse and keyboard, or a touchscreen interface. Your character moves via tapping, or touching and dragging towards where you’d like to go. Tapping on enemies launches attacks based on your class. On the PC, this is all handled with a mouse, granting access to potions and restoratives with keyboard clicks rather than screen touches. The single-button simplicity of the iPad works well. The ability to use mouseover to view item statistics, and hitting 1-5 to launch special attacks works best on a PC, but it’s not entirely cumbersome on either platform.

The iPad Air is no slouch amongst iOS devices, but I did note some graphical missteps not present on a relatively low powered laptop. On the iPad I saw a few bits of graphical tearing, some objects hanging in the air stuck, and enemies sliding around like demonic versions of Gumby. It’s not overly egregious, but when it does happen it does stick out.

Into the realm!
Gameplay in KingsRoad nails the basics found in titles like Diablo and Torchlight, albeit with a bit less complexity. You’ll pick from three characters — Knight, Archer, or Mage (though the Archer class sits behind a 100,000 gold paywall – not a tremendous amount of cash in the scheme of things), each with their obvious strengths and weaknesses. Set your expectations to action/adventure more than RPG, though there is a great deal of crafting — more on that later.

All the side noise goes away when you leave town.

Structurally, the game is split up between dungeons, overland, tournaments, and the town which acts as a central hub. The whole affair is very linear, as are the maps, at least for the most part, though they all follow a similar formula. You’ll tackle minions for a bit, you’ll fight bigger minions, you’ll kill a boss, and then loot falls on the ground. Split up in true MMO fashion, the loot falls into vendor trash, fine, superior, and so on.

Combat is a great deal of kiting for the two ranged characters, as it would be in any other games featuring cloth or leather-wearers. Enemy AI is of the ‘run towards you relentlessly’ variety in the beginning, but later levels introduce classes beyond brutes. Mages join the fray, adding armor to your foes, or hurling ranged fire of their own. Enemies also begin to have traits like knockdown, acid damage, hails of arrows, and much more. The variety in terms of locations and enemy types ramps up quickly, even if it is a bit of a slow and repetitive start through the semi-tutorial sections. But let’s talk about all that loot.

Not unlike the aforementioned Diablo or Torchlight, your character has a full paperdoll system for your equipment. There are eight slots for equipment, in addition to two weapons. There are also eight more purely cosmetic things to slot, as well as another eight trinket spots. Each are visible on your character, conveying stats like additional armor, faster attacks, and other modifiers you might imagine.

It’s F2P – you knew there’d be grinding
While there is no ‘energy’ system to tell you when you’ve had enough fun, there are certainly restrictions. You start the game with 16 bag slots for inventory, and adding to that number costs gems. Gems can be earned through grinding out achievements and quest goals. Partnering up with friends (or complete strangers) can yield you additional XP and rewards, but you’ll still have a lot of items to pick up. Of all the ways KingsRoad pulls the grinding handle, it’s in loot.

When you rescue the blacksmith you’ll be able to forge your vendor trash into fine items. If you have four of them, it only costs you 100 gold to turn them into a single “fine” item — a pittance. As you level your character you’ll unlock the ability to do the same thing to move fine items into superior and so on. Certainly you can sell items as well, but that’s downright wasteful. If you don’t have enough items to fill all four slots you can, you guessed it, fill the remainder with gems.

Each class has a dozen or so abilities, both active and passive, and all with 10 levels of mastery for each of them. Going up a level grants you a point to spend on an active or passive skill, gated by levels. These bump your attack skills, cooldown timers, increase your mana regeneration, give you a larger life pool — the usual RPG fare. Putting a point into them might make your fireball go from 80% to 84% damage, or might add 0.1% to your mana regeneration, as examples. If you aren’t inclined to crank out levels, however, you can also use gems to buy skill points. While new powers are gated by level, you can sure make what you have very, very powerful.

As your bags fill up, you’ll find that you now have gems and crafting powders to keep track of for upgrading your socketed equipment. These come in several varieties, and again can be augmented with real-world money. Socketing items requires the correct shape of gem, combining gems to upgrade them to the next level requires you hold multiple of them, picking up items that are above your level means holding them (though you can pay gems to unlock it right away!) — it’s all a large strain on the bag space.

There are three difficulty levels in KingsRoad to tackle each area. Completing the level on Normal, lets you tackle it on Heroic, and finishing all objectives on Heroic opens up Champion. At the end of each map you’ll get a summary of how well you and your friends did tackling that map, as well as gold and gems rewarded for your efforts. Killing enemies and blowing up destructables raises your score, with bonus rewards set for hitting milestones. As you tackle dungeons you’ll find chests. Not unlike gear, these are split up as Fine, Superior, and the like, but popping the lock will cost you…well, you know where this is headed.

It’s dangerous to go alone
Beyond the blacksmith and enchanter, there are other NPCs you’ll encounter in KingsRoad. Kira the Apprentice will send her minions to tackle sub-objectives that take real-world time, not unlike the guild quests in the Assassin’s Creed series. You’ll also meet an alchemist who sells potions, and eventually a banker that can help with some of that bag space fatigue I mentioned earlier. Again, expanding space has a gem cost, but it’s better than nothing.

There are a GREAT many levels to tackle

Beyond cooperative play (and I highly encourage that – it takes the edge off of grinding), there is an event and tournament system. These require specific currency (not gems this time) to tackle, and offer lock boxes full of special and rare equipment for completion, as well as extra XP.

There is a full guild system in KingsRoad. You can build a guild of your own, or join an existing one, and each level achieved by your guild will offer special rewards. These can be price reductions at vendors, additional armor for all characters, a bump on your base mana, more gold per kills, and more.

All told, there is a lot of fun to be had here. You’ll hit somewhere around level 20 before you really feel the pressure of the grind and the linearity really starts to creak a bit. Playing with friends helps, but at its heart, this is a free-to-play game. A very high quality free-to-play game, but free-to-play all the same.

Ron Burke is the Editor in Chief for Gaming Trend. Currently living in Fort Worth, Texas, Ron is an old-school gamer who enjoys CRPGs, action/adventure, platformers, music games, and has recently gotten into tabletop gaming. Ron is also a fourth degree black belt, with a Master's rank in Matsumura Seito Shōrin-ryū, Moo Duk Kwan Tang Soo Do, Universal Tang Soo Do Alliance, and International Tang Soo Do Federation. He also holds ranks in several other styles in his search to be a well-rounded fighter. Ron has been married to Gaming Trend Editor, Laura Burke, for 21 years. They have three dogs - Pazuzu (Irish Terrier), Atë, and Calliope (both Australian Kelpie/Pit Bull mixes).
Related Articles: Kingsroad
Share
Tweet
Share
Submit