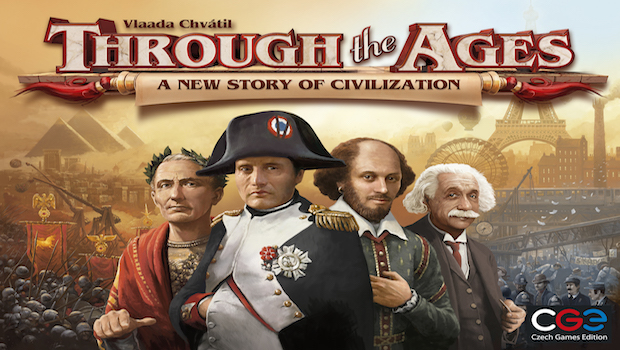 I have played numerous civilization games, and many of them are quite good. Nations, Roll Through the Ages: The Bronze Age, and Clash of Cultures are just a handful of excellent civilization games, each with their own unique merits. Yet, when it comes to feeling like you’ve battled through the eons to forge a dominant empire, each of those falls somewhat short. What makes the PC Civilization series so great is how it portrays the epic quality of the situations depicted in-game. You experience a bit of guilt when your Steam counter reminds you how many hours you’ve played, and you do the math to realize it’s the equivalent of an entire week’s worth of time. There’s even the famous story of the man who played the endless Civilization game the descended into a three empire stalemate. Thankfully, Czech Games Edition’s Through the Ages: A New Story of Civilization gives you a taste of that sweeping epic as you mold a fledgling society into one that wins the game with a dominating culture.

Like any other civilization game, you begin with meager offerings: a warrior, a couple of farmers and laborers, and a scientist. You understand religion but have no temples. You have only the most primitive of governments. Technology is a few turns away, so your focus early is on just a handful of options. Your government allows you so many actions during your turn which are divided between civil and military. Civil actions cover all the things associated with improving your empire’s population and productivity. You can also collect cards, and in the early era, these include instant production bonuses, wonders, or basic leaders. Cards are laid out on a board in a line. As you progress from the opening era to the next, cards are shifted to the left as new era cards become available. The farther left the card is on the board, the cheaper the card becomes; however, you must pay the action, science, or production cost to actually use the card. Buying it from the line simply places it in your hand.

Military actions become important later, as they allow you to increase your army strength or, when unused, allow you to draw from a special military deck. These cards can allow you to wage war, raid opponents, or create stronger armies.

With your empire card sits a large amount of untapped resource and worker cubes. Using an action can add one of these available workers to your useable worker pool, but as you expand, you’ll need to feed that pool. Expansion is abstract: there’s no map to see how your borders are growing, just the growth of your workforce and army cubes reflect your expansionist efforts. At the end of each round, you collect food, labor resources, and science, which acts as the game’s currency for purchasing technological advances. Adding workers to your farm, labor, and science production increases resource output. The impact is small, but it’s essential early in the game as technological improvements don’t show up until the later eras. Even the card row lacks diversity early on with only leaders, wonders, and one-time upgrades being available. Still, wonders and leaders provide great bonuses, and even the one time upgrades can help you reach an early objective. Your growth may be slow at the beginning, but your long term strategy develops in your domain’s infancy.

As you progress from the opening era, into eras I, II, and III, your options increase dramatically. Farming and labor improvements are now available and will cost you science. Ignoring even the smallest of science outputs early on will make upgrading your technology next to impossible. Once learned, the game has an interesting way of implementing your new found technology. For example, just because you now understand how to use irrigation doesn’t mean your workers know how to put it in action. Irrigation is placed, but your workers continue to do things the old fashioned way. To improve them, you need to pay the difference in resource cost between the new and old ways. This acts as a way of teaching your workers the new techniques. Additionally, cubes in this new area are worth more resource. Each cube in your starting farming area is worth just one food, while cubes that are collected from irrigated land are now worth two food. It’s a neat way of showing how a society evolves, but it’s an easy thing to overlook until you’ve run through the game a few times.

You can also improve your empire through special technologies which, once researched, provide continuous bonuses for you. There are also new categories of buildings to construct. These include centers for art and learning that can add much needed science and culture. Remember, culture grants victory, but it’s hard to develop a steady stream of culture early as you’re just getting onto your feet, so these later advancements become the key focus for each player.

Still, all the advancements in the world mean little if you remain the weak despot you are at the offset. Developing a better government grants you more actions per turn, but there’s more to it than simply swapping in a new idea. Your government can evolve peacefully which costs you a considerable amount of science, or it can have a revolution which costs a fraction of the science but uses up all your actions for the turn. This reflects the game’s core strength; every step requires a decision. The depth of this game with every action is outstanding.

Advancing eras also makes military more important, though even in the early stages you want to keep an eye on your opponent’s army strength. The success of wars or aggression cards depends on having more military might than your opponent. Most of your strength will come from the number of troops you have and their overall strength. Each cube positioned with your initial warrior is worth one strength point, but improving your military technology allows you to improve each cube’s strength through upgrades. However, you can add to your military strength through certain governments, wonders, or forming armies. Armies are formed through combinations of unit types. Some military cards can add hidden strengths to your army as well. This means wars must be waged carefully: what you think is an opponent’s military strength may actually be more powerful due to these hidden abilities.

Included in the military deck are various event cards that can be played during the political phase. However, these cards cannot be immediately played. Instead, they go into a future events deck. This is interesting, because placing these cards gives you the chance to prepare for them for when they pop up later. As the initial deck of generic events exhausts, the new events deck is shuffled and ready to be explored. Colonization cards are one of the offerings that might appear. These new land holdings can add bonuses, but, in true historical faction, everyone is scrambling to gobble up these colonies. This is done through a bidding process. Each player can bid part of their military strength to win control of the colony, but if you win, those military units are removed from your board and returned to the untapped worker pool. Gaining a colony could suddenly make you vulnerable to attack if you bid too high. Other events may be pulled that can have either positive or negative effects for you if you meet certain game conditions, such as having the highest population.

As you can see, there’s a lot going on in this game, but don’t let that be a reason for you to shy away from this title. There’s a reason this game is, as of this writing, second on the Boardgamegeek’s list of top games. Through the Ages: A New Story of Civilization is a strategic wonderland. There’s a lot for you to consider at every turn, and your path to a mighty civilization may be different from your opponent’s. It will surely take you a few plays to understand some of the nuances of the game, but your persistence will pay off as an immersive experience unfolds.

Through the Ages: A New Story of Civilization

Through the Ages: A New Story of Civilization immerses you in an epic domain building experience. Long term planning allows you to see your civilization grow from its beginnings into a mighty empire. It's deep but worth the time commitment to learn.

Nick grew up with games like Axis & Allies, Fortress America, Samurai Swords, and Statis Pro Football. After a life hiatus to work and start a family, he rediscovered his passion for gaming in 2012. Originally a war gamer, he now appreciate different genres and enjoys exploring great game systems.
Related Articles: Tabletop, Through the Ages
Share
Tweet
Share
Submit