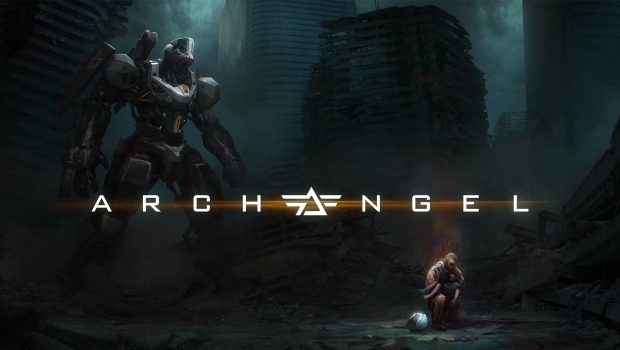 Pacific Rim, MechWarrior, Robotech, Gundam, Heavy Gear, Front Mission, Armored Core, Virtual On, Steel Battalion — the list goes on nearly forever and proves one simple fact: we are in love with giant robots. Skydance Interactive (spawned from Skydance Media – the studio that brought you Jack Reacher, Star Trek Beyond, Life, and the more recent (and upcoming) Mission Impossible movies) has delivered their freshman VR effort, Archangel, and after a surprising E3 playthrough (and subsequent nomination for best VR of E3), I was simply unprepared for just how fantastic the game would be.

Archangel starts off simply enough. You are the pilot of an experimental mech about to launch into a training mission to showcase and test its offensive and defensive capabilities. When calamity strikes, we find ourselves in a war between the protagonist’s army and a splinter human faction called HUMANX. There’s a fairly large spoiler in the first level that thrusts the main character into this war in a very personal way, so our hands-on video coverage will start at Level 2.

While Archangel supports the Dualshock controller, I highly recommend you play it with the PlayStation Move. There’s a visceral difference between the two control mechanisms that build on the immersion of piloting a giant stompy robot. The game is on rails as there’s no effective way to control your movement while independently controlling your left and right arm. You’ll need to do exactly that as each mech arm has a weapon as well as a short-duration shield that blocks incoming fire for a limited time. They are small circular transparent shields, like a Roman Gladiator Parmula, meaning you’ll have to put them into position to block the otherwise-massive behemoth chassis and head of your mech. As your weapons are mounted into the hands of the mech, alternating between firing and blocking takes up all your time — you’ll be glad that movement is automated.

If there’s one area where Skydance Interactive absolutely nails it, it’s in the presentation. While some VR games continue to look like PS2-era Tekken, Archangel is graphically on par with a lot of non-VR shooters on the market today. It’s impressive and has a rock solid framerate on PSVR — something we tested on both a launch PS4 and the PS4 Pro. Initially, Batman Arkham VR was my go-to for demonstrating VR to newcomers; Archangel just took that top spot. The first time you lift your arms, punching and shooting targets, it’s a solid reminder of why you bought a VR headset in the first place.

It’s not all roses in the graphics department, however — we need to talk about that lip synch work. Your fellow soldiers are piloting various vehicles around you, communicating with the protagonist via their in-cockpit comms system. These characters are very low-poly compared to the fantastic visuals on the protagonist’s son, and their mouths never match what’s coming out of them. Similarly, there are moments where entire buildings or vehicles will explode, raining debris all over the place, but collision is simply turned off for them. It’d make you feel more plugged into the combat if you had to block this debris, and if it was rendered at a higher poly count.

As the game progresses, your AI partner will repair the mech’s damaged subsystems, unlocking a secondary weapon for the left and right arm. Your performance in each mission yields points that can be used to upgrade your weapons, armor, and shields, as you can see in this short video below:

There are some story-driven moments when you’ll have to crush your way through obstacles, balling up your fists and punching or throwing down a “Hulk smash” on top of whatever is in your way. Unfortunately, these moments are entirely story driven. I kept waiting for that close-quarters hand-to-hand moment, but it just never came. Perhaps Archangel 2?

Regardless of how you upgrade your mech, Archangel is a challenge. Using shields and weapons, alternating between your shields and dealing damage soon gives way to swapping through your weapon payloads while juggling multiple threats in the environment. Tanks get support from shield generators, foes begin to flank you on multiple sides, kamikaze pilots roar towards you unrelentingly, and the bosses are no joke.

All in all, there’s about five hours of storyline to experience here, but it may take quite a bit longer due to the sheer difficulty, and a painful 30 second loading sequence between each level and after every death. Thankfully, the checkpoints are frequent enough that the difficulty never feels too punishing, but even on a PS4 Pro with an upgraded hard drive, the loading sequences are a beating.

Archangel fulfills the Pacific Rim mech fantasy we have yet to experience in a VR world. The fluid and engaging combat is a highlight, as is the solid tracking and intuitive controls. While there’s not a lot of replay value, it’s easily one of the most impressive ways to introduce someone to VR. If watching the trailer for Pacific Rim: Uprising makes your palms sweaty with excitement, you need Archangel in your life.

Ron Burke is the Editor in Chief for Gaming Trend. Currently living in Fort Worth, Texas, Ron is an old-school gamer who enjoys CRPGs, action/adventure, platformers, music games, and has recently gotten into tabletop gaming. Ron is also a fourth degree black belt, with a Master's rank in Matsumura Seito Shōrin-ryū, Moo Duk Kwan Tang Soo Do, Universal Tang Soo Do Alliance, and International Tang Soo Do Federation. He also holds ranks in several other styles in his search to be a well-rounded fighter. Ron has been married to Gaming Trend Editor, Laura Burke, for 21 years. They have three dogs - Pazuzu (Irish Terrier), Atë, and Calliope (both Australian Kelpie/Pit Bull mixes).
Related Articles: Archangel, VR
Share
Tweet
Share
Submit