The full list of games heading to (and leaving) Xbox Game Pass in January 2022 have been announced and includes Mass Effect Legendary Edition, Embr, Spelunky 2, and more. You can read below for more information or visit Xbox’s blog:

Welcome to 2022! We’ve got some awesome games coming soon — and even some available today — so let’s kick off the new year and find that next great game to add to your download queue or to play via the cloud!

Gorogoa (Cloud, Console, and PC) [email protected]
Winner of Debut Game at the BAFTA Games Awards, Gorogoa is an elegant evolution of the puzzle genre, told through a beautifully hand-drawn story designed and illustrated by Jason Roberts.

Olija (Cloud, Console, and PC) [email protected]
Olija is a game about Faraday’s quest, a man shipwrecked then trapped in the mysterious country of Terraphage. Armed with a legendary harpoon, he and other castaways try to leave this hostile country to return to their homelands.

The Pedestrian (Cloud, Console, and PC) [email protected]
The Pedestrian is a 2.5D side-scrolling puzzle platformer set in a dynamic world with stunning graphics and challenging puzzles, where you will rearrange and reconnect public signs to explore and advance through each engaging environment. 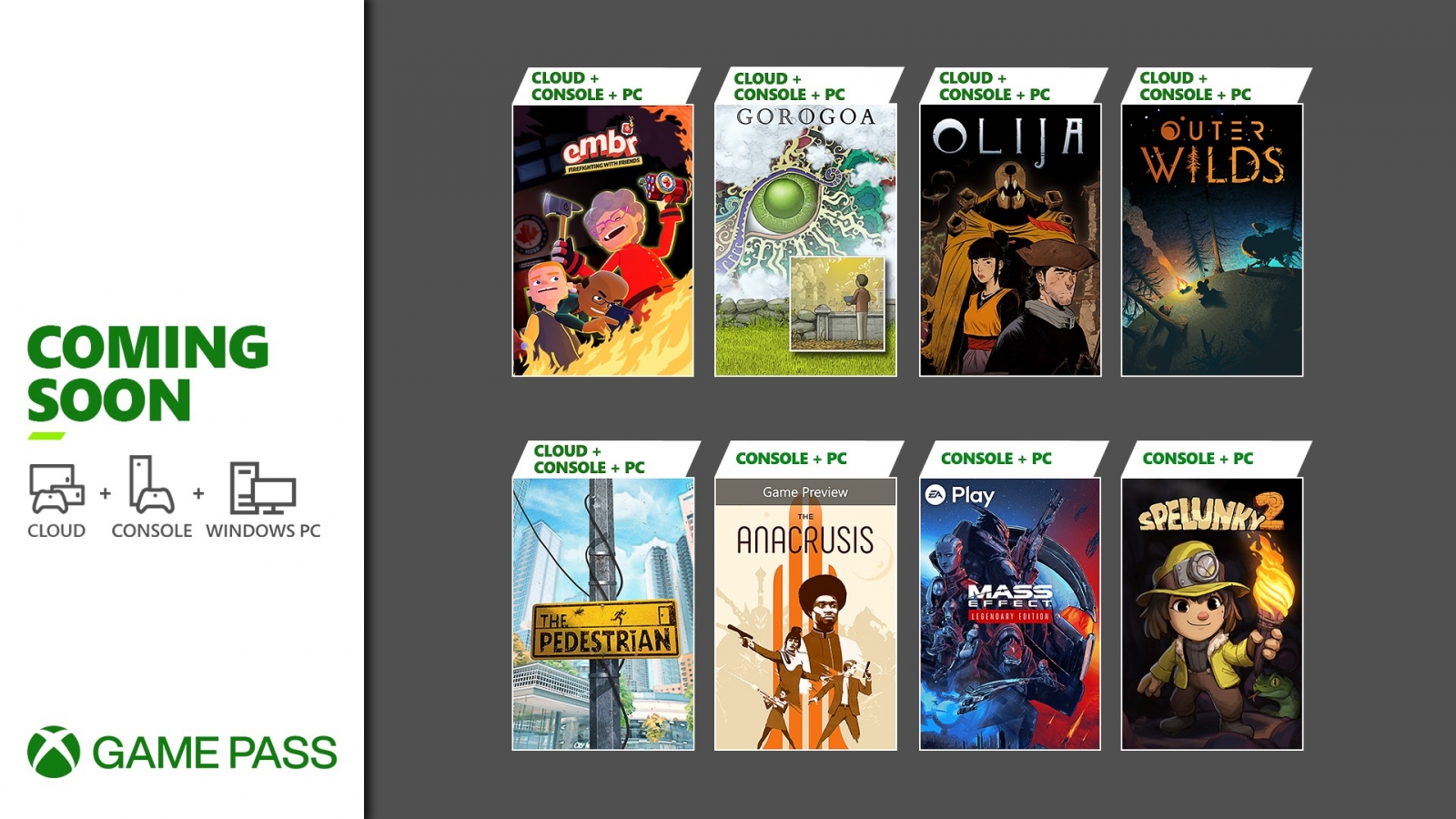 Embr (Cloud, Console, and PC) [email protected] – January 6
Fight fires with friends for profit in this unpredictable and frantic multiplayer game. Team up with friends, take on daily challenges and climb to the top of the corporate firefighting ladder. More than one way to become a hero!

Outer Wilds (Cloud, Console, and PC) [email protected] – January 6
Explore for the sake of your curiosity with a hand-crafted solar system filled with secrets to discover and perils to avoid while exploring space. Players are given a variety of tools to aid in space-backpacking, including their own spaceship and jetpack; a surveyor probe for scouting and taking pictures; and a signalscope to track down audio signals and view landmarks from afar.

Spelunky 2 (Console and PC) [email protected] – January 13
This challenging roguelike platformer offers you immense freedom to carve your own path through its randomly-generated caves and ruins. Exercise your creativity and through your actions, tell a unique story each time you play. Uncover the secrets alone or with friends!

The Anacrusis (Game Preview)(Console and PC) [email protected] – January 13
Available on day one with Xbox Game Pass: The Anacrusis is a four-player, cooperative first-person shooter set aboard a massive starship stranded at the edge of explored space. Team up with your friends in an infinitely-replayable fight against alien hordes to unlock perks, weapons, and new ways to play that you can share with your team!

Phantasy Star Online 2 New Genesis: January Member Monthly Bonus – January 5
Jump into the all new PSO2 New Genesis with some items to give you a hand! N-Half Scape Dolls (x5) to help revive you during intense battles, and Photon Chunks (x50) to strengthen weapons and units.

This is also your last chance to claim the Back 4 Blood Battle-Hardened Bundle, and the Halo Infinite Pass Tense MA40 AR Bundle before they leave! Go claim them now in the Perks gallery on your Xbox console, the Xbox App on your Windows PC, or the Xbox Game Pass mobile app.

The following games are leaving the Game Pass library soon, so be sure to jump back in and tie up any loose ends before they leave! Remember you can save up to 20% off your purchase of these games using your member discount.

Ghost of a Tale (PC)