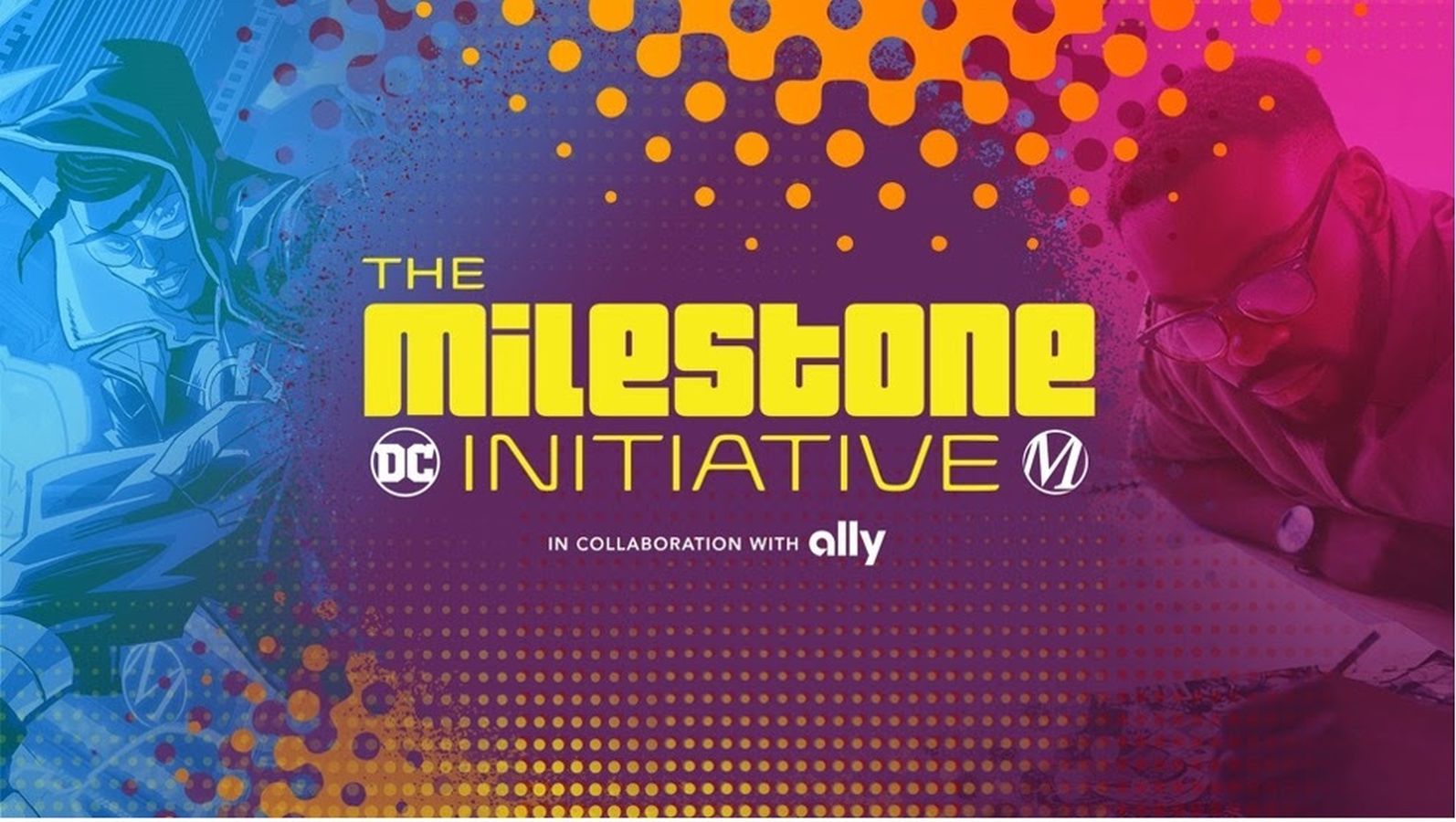 At DC FanDome a large collaboration between DC, WarnerMedia, and Milestone was announced, called The Milestone Initiative focused on cultivating the next generation of diverse creators in the comic book industry. Details below:

With an aim to identify, support and elevate emerging diverse writers and artists within the comic book industry, The Milestone Initiative gives fans in the U.S. the opportunity to apply for The Milestone Initiative Development Program, which includes a one-week in-person training seminar in DC’s Burbank, CA offices, followed by an eight-week virtual technical training course through the prestigious Kubert School, where participants can hone their storytelling skills and become part of the next wave of great comic book writers and artists.

The Milestone Initiative is the inaugural program from DC’s Next Generation DC, a talent recruitment, mentoring and development program designed to increase access and opportunities for writers, illustrators, and creatives from underrepresented communities across the globe to contribute to DC comic book content, expand representation and tell authentic stories featuring some of the most recognizable characters in comics.

Co-founded in 1993 by artist Denys Cowan, writers Dwayne McDuffie and Michael T. Davis and Black Enterprise EVP/Chief Content Officer Derek T. Dingle, Milestone Media was created to address not only the lack of superheroes of color in comics, but also the lack of storytellers of color creating the content. In collaboration with DC, Milestone Media created the fictional city of Dakota, and some of the most unique and innovative characters in comics, such as Static, Icon, Hardware, Blood Syndicate and others.

Milestone Media stepped away from comics in 1997, but after adding award-winning producer Hudlin (73rd Primetime Emmy Awards, 52nd NAACP Image Awards, Django Unchained, Marshall) to its team, Milestone Media rejoined forces with DC this February. The relaunch began in May with the release of the Milestone Returns: Infinite Edition one-shot comic, before relaunching the line this Summer with updated and contemporized versions of their core line of characters – Static Season One, Icon and Rocket Season One, and Hardware Season One.

“The Milestone Initiative Development Program is the perfect project for debuting Next Generation DC,” said Daniel Cherry III, Senior Vice President and General Manager, DC. “Our current lineup of Milestone titles have released to great critical and sales success, expanding the loyal fanbase, while at the same time inviting new readers to experience the ‘Dakotaverse’ and its heroes. For many black and diverse artists and writers, Milestone is part of their comic book DNA, Cherry continued, “and we are thankful to partner with Ally to help these new voices be heard in addition to adding to Milestone’s legacy.”

“From its earliest years, representation, impact and mentorship have always been at the heart of Milestone Media, and we’re proud and excited to partner with DC, WarnerMedia and Ally on Next Generation DC and The Milestone Initiative, cultivating the next great wave of diverse storytellers,” said Milestone co-founder and iconic artist Denys Cowan.

To amplify The Milestone Initiative Development Program, WarnerMedia’s ad sales division will create a full slate of content in collaboration with Ally, a digital financial services company committed to advancing economic mobility and empowerment for underrepresented communities by providing funding, mentorship and access to opportunity that individuals need to succeed.

“The Milestone Initiative is a powerful extension of Ally’s overall commitment to financial and social inclusion,” said Andrea Brimmer, Chief Marketing and Public Relations Officer, Ally. “It is very much in line with our other programs, all of which provide rich, immersive experiences that create pathways for success in grossly underrepresented fields. Programs like our annual Moguls in the Making business pitch competition for HBCU students and our work with the University Growth Fund to drive diversity in venture capital are about opening doors that have previously been closed to many Black Americans. We are proud to be a part of empowering and elevating diverse creators, and increasing representation of these storytellers to reflect the diversity of our communities.”

WarnerMedia’s new franchise-first approach brings IP like Milestone to the heart of partnership opportunities, providing brands with a way to connect to passionate fan bases inspired by the franchises’ zeitgeist. “Across the unique marketing programs and brand storytelling we offer to our partners, our goal is to galvanize fans and create marketing platforms that bring a brand’s ethos to life,” said Michal Shapira, Head of WarnerMedia Marketing Solutions and Brand Studios. “We look to align with a brand’s mission in a way that demonstrates creativity, cultural relevancy, and most importantly, character, while generating outcomes that achieve their goals and objectives. We are very fortunate that our partner Ally is as passionate about the Milestone mission as we are.”

The Milestone Initiative will span linear, digital and social touch points, while incorporating elements of social good, equity and inclusion along the way. Distributed across WarnerMedia’s ad-supported ecosystem, the campaign includes documentary-style videos and interactive digital assets to inspire a new generation of creators and far-reaching audiences. WarnerMedia reaches 77% of multicultural audiences in the U.S. – a total of 69 million people – across its digital and linear platforms.

To learn more about The Milestone Initiative Development Program and submit an application, fans can visit the website at www.dcuniverse.com/milestone.