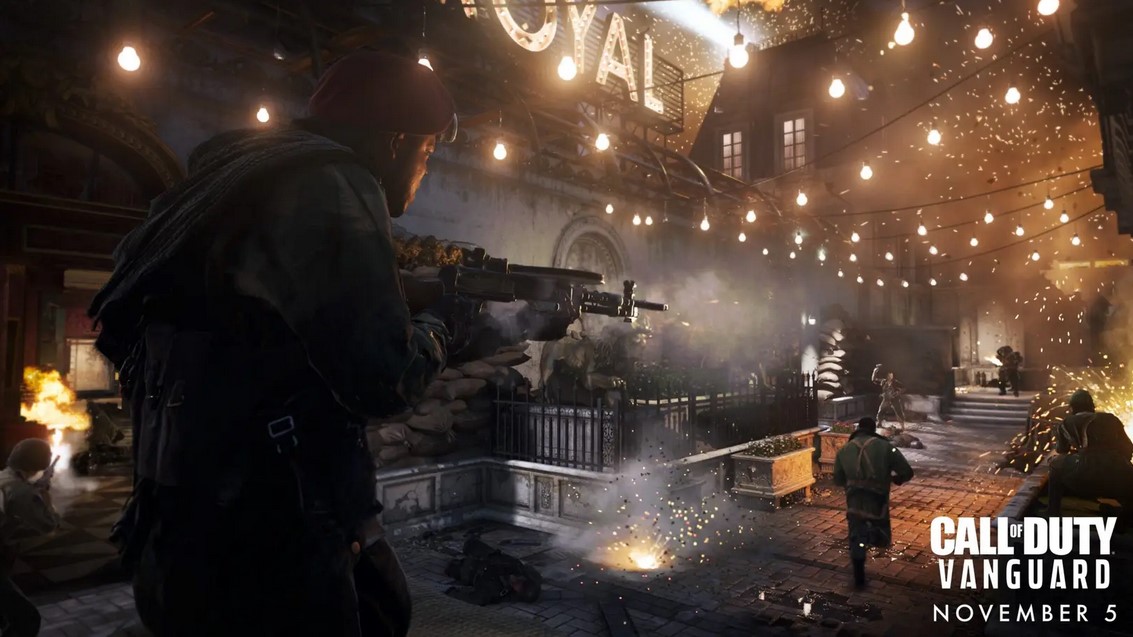 In today’s PlayStation blog, Chris Fowler, Principal Engineer for Sledgehammer Games, dropped some details about the innovative ways that Call of Duty: Vanguard will make use of the PS5’s DualSense controller, including tactile feedback for the many guns at your disposal, use of adaptive triggers for firing, and how haptic feedback will help add another layer of realism to the war experience. Check out the details below:

The immersive WWII experience is brought to a heightened level with the power of PS5’s DualSense wireless controller.

The Call of Duty franchise has always been about great gunplay, underlined by the diversity of weapon classes and multiples of attachments creating a vast breadth of options to choose from before heading into battle.  But experienced players know it’s more than how much damage a particular weapon does, or how quickly the downsight speed of another allows you to strengthen your K/D ratio – – how a weapon feels to a particular player has as much to do with success as anything.

At Sledgehammer Games, we’re happy to let PlayStation 5 players know about how Call of Duty: Vanguard is going to leverage the features of the DualSense wireless controller to elevate the sense of immersion and bring an array of tactile experiences to different weapons in the game.  In a game about warfare on a global scale, the haptic feedback and adaptive triggers of the DualSense controller provide us an opportunity to bring that experience to life like no prior generation of console could.

Here are some examples of what PS5 players can expect to experience on Call of Duty: Vanguard when it launches on November 5.

The Art of the Trigger Pull

Our goal in Call of Duty: Vanguard was to simulate the trigger weight of real-world weapons, and to give the player the opportunity to find the trigger pull that works for them in the game. This is greatly aided by the feedback applied by the DualSense controller’s adaptive triggers.

There are several stages of a trigger pull in the game: the “take-up” or distance a trigger travels once a player starts to press it.  Then there’s the “break” – – or the point at which the shot is fired once a correct amount of pressure is applied.  Then there’s the “over-travel” which is how far the trigger pulls after the break point, and finally, the “trigger reset”, which stops automatic firing and resets the break.

It’s at the “break” stage that the DualSense controller’s adaptive triggers apply varying degrees of feedback to help create the feeling of weight on the trigger.  This feedback is applied differently for different weapons, creating a more accurate sense of trigger weight for each.

For instance, if you’re running around with a 1911 sidearm you’ll feel a moderate amount of tension as you get to the break point, but it won’t hold the same weight as that M1 Garand marksman rifle.

Additionally, what this means is that you are really going to feel the power of your LMG as you’re blasting through those doors and walls in Vanguard’s new reactive environments …

Much more than you would, say, the fast, rolling jolts as you’re spraying fire into an enemy’s direction with your SMG or even an AR, like the STG.

Finally, the feedback applied by the DualSense controller doesn’t just impact the firing trigger in Vanguard, but the scope trigger as well, meaning the downsight speed and L2 trigger weight changes based upon what weapon you’re wielding.  For example. heavy weapons will feel heavy, lighter weapons will feel light, and everything in between.  Plus, the attachments you have on your weapon will play a role in this as well, so it’s a factor to consider as you’re making your selections.

In the end, the player will find variety in weapon feel, will find new variables to work with in weapon tuning, and will have the ability to add new attachments that change how the trigger reacts, the force of the feedback, and the downsight speed.  The ability to do this with the DualSense controller has not only allowed us to add a new degree of tactical decision-making for players when building their perfect loadouts, but helps to increase the sense of immersion in the overall experience.  And in the case any players decide these features aren’t for them in a particular circumstance, they can be turned on or off in real time the game’s Settings.

Haptic Feedback and the Sensations of Combat

The realism of the weapon feel isn’t the only thing that will set playing Call of Duty: Vanguard apart on the PS5 and add to the visceral experience of global warfare.  As you traverse the multiple fronts of WWII, the explosive elements of combat are not just experienced through sight and sound, but tactilely as well.

Throughout the Campaign and Multiplayer, there will be moments that the chaos of war is on full display, and with the help of haptic feedback in the DualSense controller you will feel the action happening around you pulse through your hands and traverse up your arms.

So when enemy fire is tearing through your cover, you will feel the impacts of the bursts and debris around you.

Or when the Luftwaffe rains down it’s fury as you’re sprinting for your life in Stalingrad, you will feel the thud of the heavy explosions, adding to the chaos of the moment.

It is moments like these that help to set Call of Duty: Vanguard apart as a WWII experience like never before, and one that reaches a new level of immersion on PS5.

We’re beyond excited for PS5 players to get to experience the game for themselves in just a few short days.Don’t forget to pre-order today and receive several bonuses, like the ability to get the Ghost of War Ultra Skin for Call of Duty: Black Ops Cold War and Warzone for free by pre-ordering Vanguard through November 2. Rise on every front.