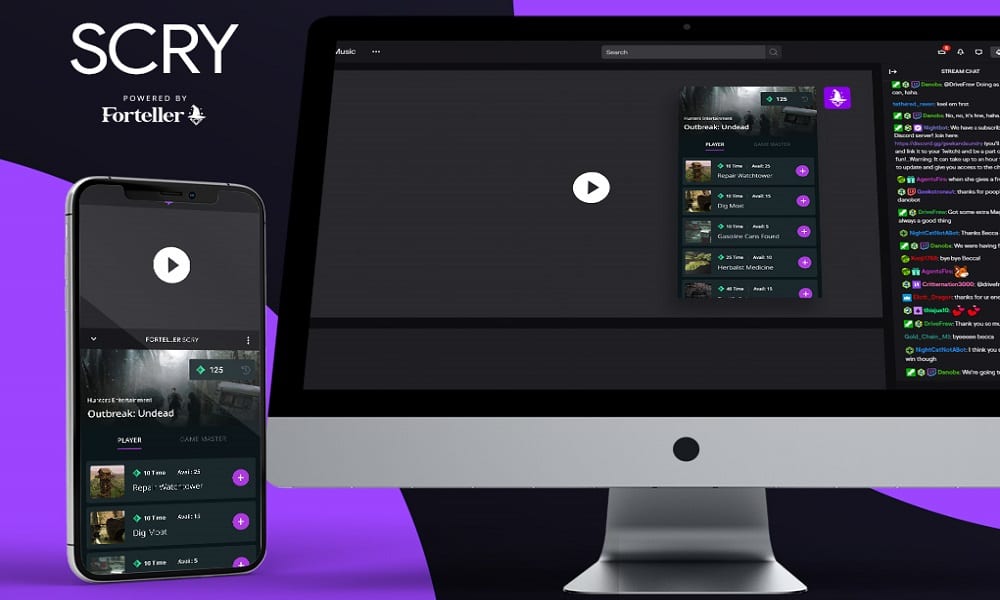 Are you ready to engage your Twitch community with your streams? Hunters Entertainment and Forteller Games have recently released their Forteller Scry extension, which will allow viewers to participate in games on a Twitch stream, which will expand the depths of player interaction among streamers and viewers.

Hunters Entertainment and Forteller Games are excited to announce the release Forteller Scry. A Twitch extension that provides streaming channel viewers with the ability to participate in games with the players in the Twitch stream. This is the first API on Twitch that allows this kind of in-stream action.

Twitch channel admins will be able to create goals and items which can be purchased with unique channel based ‘game currency’ thanks to Forteller. This currency is increased by viewer participation with actions such as bits, subs, and hours watched. With in-game current in hand, viewers can now affect the story outcome of streamers in play.

An example of this is as follows: During a live play, players need to craft a fence, in order to protect themselves – so the channel admin places a ‘help with fence’ item that viewers can now ‘purchase’ using their acquired currency. Once that unique goal is met (say 1000 currently spent, with as many as 100 or as little as 1 participant) – the players can in real time get the benefits of that player participation.

While there are other Twitch API’s that provide ‘Goal Tracking’, Scry allows for Twitch admins to create and valuate these items on the fly in order to bend to the demands of live content.

The Quick & Short about Forteller Scry: Forteller Scry allows broadcasters to adjust live game narrative, based on viewer interactions. Viewers can aid or impede favorite characters or plot lines and add another dimension of immersion, storytelling and entertainment.. It gives channel admins the ability to upload items that can be purchased from the extension, that is added to the Live game. Subscribers of the channel will receive an allotted amount of resources to spend (currency is called “Time”). These items can either help or hurt the players in the live game.

Did you know that Gaming Trend currently has a D&D campaign on its Twitch channel? You can check out Return to the Glory, and stay tuned for more news here on Gaming Trend.