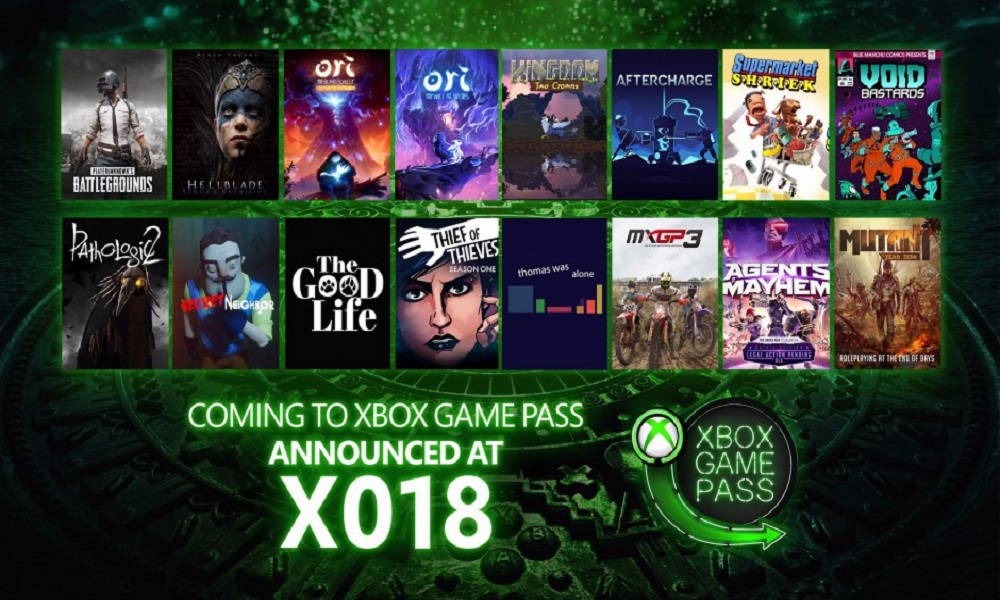 Last weekend at Xbox X018, Microsoft detailed its future plans for its expansive online game service, Xbox Game Pass. In addition to titles like Hellblade: Senua’s Sacrifice coming soon, the Xbox Game Pass app is now available on mobile devices, which will let you queue downloads from your phone.

Today, Microsoft announced the general availability of the Xbox Game Pass app on iOS and Android, enabling you to seamlessly browse and download new games to your home console via your mobile device, so you can quickly jump into gameplay the next time you turn on your Xbox One. We are also excited to continue to expand and diversify the Xbox Game Pass catalog by making the popular blockbuster title PlayerUnknown’s Battlegrounds (PUBG) available to all members beginning on November 12. In addition, Thief of Thieves is officially available on Xbox One and in Xbox Game Pass starting today and we’re bringing Agents of Mayhem, MXGP3 and Thomas Was Alone to you starting on November 22.

We are also excited to bring unique gaming experiences like Ori and the Blind Forest, Kingdom Two Crowns and Hellblade: Senua’s Sacrifice to Xbox Game Pass this December and we announced additional new games from independent developers launching through the [email protected] program that will come to Xbox Game Pass the day they debut on Xbox One. Starting this holiday, this list includes Aftercharge, Supermarket Shriek, Mutant Year Zero, Pathologic 2, The Good Life, Void Bastards, and Secret Neighbor. Furthermore, we confirmed Ori and the Will of the Wisps will be available in Xbox Game Pass timed to its global release on Xbox One and Windows 10 PC in 2019.

And if all that isn’t enough to whet your Xbox Game Pass appetite, we also have an exciting offer you don’t want to miss. Starting today through January 3, you can sign up for Xbox Game Pass and receive your first full month for just $1. With a growing catalog of over 100 great games and new titles added every month, now has never been a better time to become an Xbox Game Pass member.

If you haven’t gotten on the Xbox One bandwagon yet, Microsoft has a few tricks up its sleeves during Black Friday:

Games play best on Xbox, so we’ll be offering a $100 discount on select Xbox One consoles from 11/18 through 11/26. Get the Xbox One X, the world’s most powerful console, at its lowest price ever, or the Xbox One S, the best value in games and entertainment.

With a $100 discount on the Xbox One S Minecraft Creators Bundle and a $70 discount on other bundles that pair must-have games like Forza Horizon 4 with a console, Xbox is giving you even more ways to save. Additionally, when you buy an Xbox One S, Xbox One X or Xbox Wireless controller at participating retailers you receive a digital token for Gears of War 4 free ($39.99 MSRP value).

Already have an Xbox One console? Up your game with a new Xbox Wireless Controller at a $10 discount on select controllers including Xbox Design Lab from 11/22 through 11/26.