A short teaser video for Halo Infinite season 2, which releases on May 3rd, 2022, was released on Halo’s official Twitter account recently. You can view the teaser above and read more about what to expect in season 2 below:

I’m here to answer two questions that we know are top of mind for the Halo community: “What is the Halo Infinite team working on right now?” and “When can we expect new content and features?” I’ll start with brief answers, and then get into more detail, including sharing some new info on what’s coming with Season 2.

This is the focus of the Halo Infinite team, in priority order:

1 – Addressing issues negatively impacting the player experience.
2 – Completing Season 2 and delivering it as promised on May 3rd.
3 – Continuing work on Campaign Co-Op, Forge, and Season 3.

We also have a “Priority Zero,” that undergirds everything we do, namely: team health, with an emphasis on getting ourselves into a sustainable development rhythm so that we can deliver great experiences to all of you while keeping a healthy work/life balance.

Priority Zero means that we sometimes need to move slower so that we can move faster later. Frankly, these last few months have been slower than we expected, and we sincerely thank you for your patience as we stay true to the priorities, above.

Since the launch of Halo Infinite, we have been carefully tracking and analyzing all critical issues negatively impacting players’ experience with the game and supporting services. The internal name we have for this process is the “Hotlist.” Every week, we refresh the Hotlist with new insights and review issue prioritization and progress toward fixes. The Hotlist serves as a vital internal planning tool for our monthly development sprints as well as the Hotfixes, Content Updates, and Seasons we deliver to you.

Some of the issues on the Hotlist are gaps in the Halo Infinite experience that we only fully understood close to launch and were unable to address at an acceptable quality bar before ship. An example of this kind of “known” Hotlist issue is “Spartan Career” aka score-based player progression. Examples of “unknown” issues at launch were vulnerabilities in our anti-cheat system and problems with BTB matchmaking that we didn’t realize existed until we launched the game at scale.

Thus far, we have prioritized acute, unknown-before-ship issues that have a widespread negative impact on the shipped experience. Some items have been addressed and cleared from the Hotlist (e.g., BTB matchmaking), some have had partial improvements but need more work (e.g., anti-cheat), and others are in active development but not-yet-released (e.g., Spartan Career, Campaign Co-Op, and Forge). We are working on a public facing version of the Hotlist, similar to what the studio did during the Master Chief Collection updates, so that all of you will have a clear and constant window into the status of Hotlist issues as we work to address them.

In the meantime, the Halo Support website remains your best place for information and help, if you’re experiencing any issues with the game.

If you check your Season 1 Battle Pass, you will see that that Season 1 ends on May 2nd, and that’s because Season 2 will launch May 3rd. I’m very excited to announce the official name and theme for Season 2, which is… “Lone Wolves.”

By “theme” we mean a core idea that guides the creation of much, but not all, of a Season’s content. Lone Wolf Spartans are hunters. Trackers. They’re resourceful improvisers, operating deep in enemy territory without resupply or support. They’re fierce, rugged, and prefer to work alone—but they’re still loyal to the Spartan pack. Here’s an early peek at two of these Lone Wolves:

That’s Spartan Sigrid Eklund on the left, and Spartan Hieu Dinh on the right. You’ll learn more about them (and spend more time with Spartan Commander Laurette Agryna) as you dive into Season 2’s story—a mix of cinematics, story-themed Events, Battle Pass items and more that embody the Lone Wolves theme.

But like I said, not all Season content is directly linked to the theme, and a prime example of this is our free Fracture armor core for Season 2. Here’s a concept of that core, and we can’t wait to show you all the customization options for it—and for the free Lone Wolves armor core.

During Season 2, we will also be shipping playlist updates, balance changes, new modes, and maps, specifically, one Arena map named “Catalyst” and one BTB map named “Breaker.” The new modes include “Last Spartan Standing”, a free-for-all elimination mode, as well as another new mode named “Land Grab,” plus the return of an updated, all-time favorite mode, “King of the Hill.”

We will have a lot more to share about the Season 2 maps, modes, customization options, and narrative content in April, as our marketing and promotional campaign kicks into high gear. 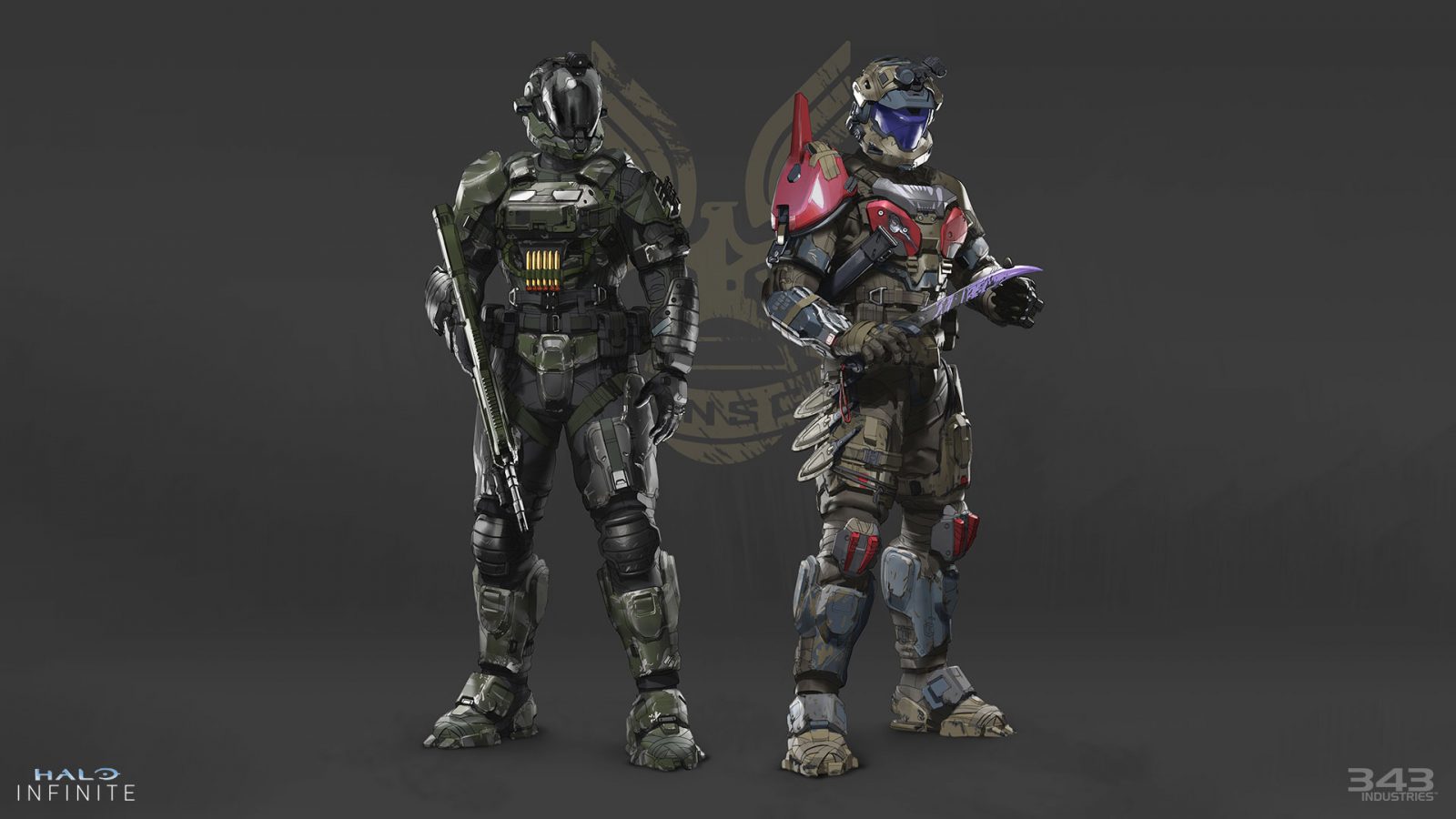 We’re making great progress on Campaign network co-op. And to be clear, this work has been occurring in parallel to Season 2 work, as has our work on Forge.

But the reality is that it’s going to take more time to land a high-quality, full-featured 4-player network co-op experience in the massive, wide-open world of Halo Infinite. We’re also committed to a great 2-player split-screen co-op experience on all Xbox consoles, from the original Xbox One through Xbox Series X—and the non-linear, wide-open sections of the Campaign present some big challenges for split-screen that have taken us more time to solve.

We are also making great progress on Forge. Indeed, we are already flighting Forge to a small group of community creators and working closely with them to ensure that all of you have a terrific experience creating, sharing, browsing, and playing Forge content. In the near term, we will continue to privately flight Forge as we develop it while also planning for public flight(s) later this year. We still have the goal of shipping Forge with Season 3.

Speaking of Season 3, while the majority of the team is tackling Hotlist items, shipping Season 2, and working on Campaign co-op and Forge, there are also many folks already hard at work on Season 3. We’ll be sharing additional details and specifics on all of these development efforts at a later date.

Importantly, we’re not just planning to address Hotlist items at the start of Seasons. Similar to Update 1.1.1 that launched a little more than a week ago, we intend to ship fixes, features, and content in more agile ways, during our Seasons.

And speaking of great Seasonal content, our next Season 1 event, “Tactical Ops,” starts next week, so get set for variants on the Tactical Slayer mode along with new, Mark VII core-focused rewards to earn!

On behalf of the entire team, thank you again for your patience and your passion. Please keep the feedback coming, know that we are listening and learning, and that we are working hard to deliver more Halo Infinite content that we hope you love to play.