Today, DeNA announced that it will release its upcoming mobile strategy game Attack on Titan TACTICS for mobile devices this summer, with a Japanese release available now. Partnering with Crunchyroll games in the United States, Canada, and Australia, the game will allow players to customize their team from 38 different characters at launch, with different events covering the anime’s first season as well as original content and stories.

Attack on Titan TACTICS, an officially licensed game app based on the popular anime series Attack on Titan, from leading mobile developer DeNA, creators of hit games like Final Fantasy Record Keeper, launched today in Japan. The game will be available in the U.S., Canada and Australia this summer. Attack on Titan TACTICS is a free-to-play real-time strategy mobile game. Players are tasked with building their own elite Scout Regiment to drive out the fearsome Titans and protect humanity. 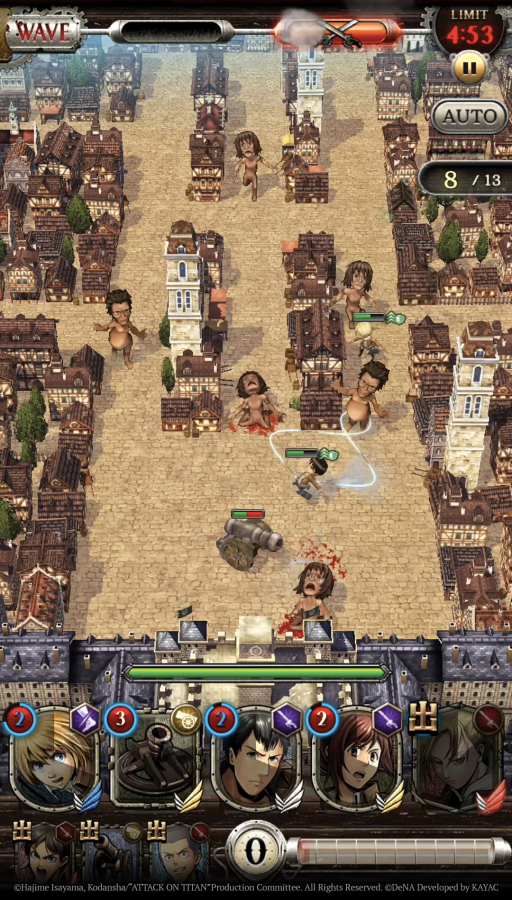 “The image is under development and subject to change.”

“DeNA is excited to launch our officially licensed game app based on the popular anime series, Attack on Titan,” says Shigenori Kobayashi, the Producer of the Attack on Titan TACTICS. “With a real-time battle system that’s easy to pick up and play, must-see battle animations, gorgeous character illustrations, and original stories, we’re confident that anime fans and gamers alike will love this strategy game.”

The main modes of play are “Story,” which covers season one of the anime at launch, with season two planned to be added; “Character Episode,” featuring original stories; and “Events;” which offers limited-time content, such as holiday-themed events.

The game will feature 38 different characters at launch, including fan-favorites, Eren, Mikasa and Levi. The characters come alive with performances by the original anime voice actors who recorded exclusively for Attack on Titan TACTICS. Each character has different roles, leader skills, abilities, and special skills. Players will be able to create their own personal deck of units as they learn each one’s characteristics. With weapons and shooters in the mix, over 70 types of units are planned to be released.

Crunchyroll has also announced that it will release Season 3 Part 2 of the Attack on Titan anime on April 28. Check out the trailer above, and stay tuned for more news here on Gaming Trend.