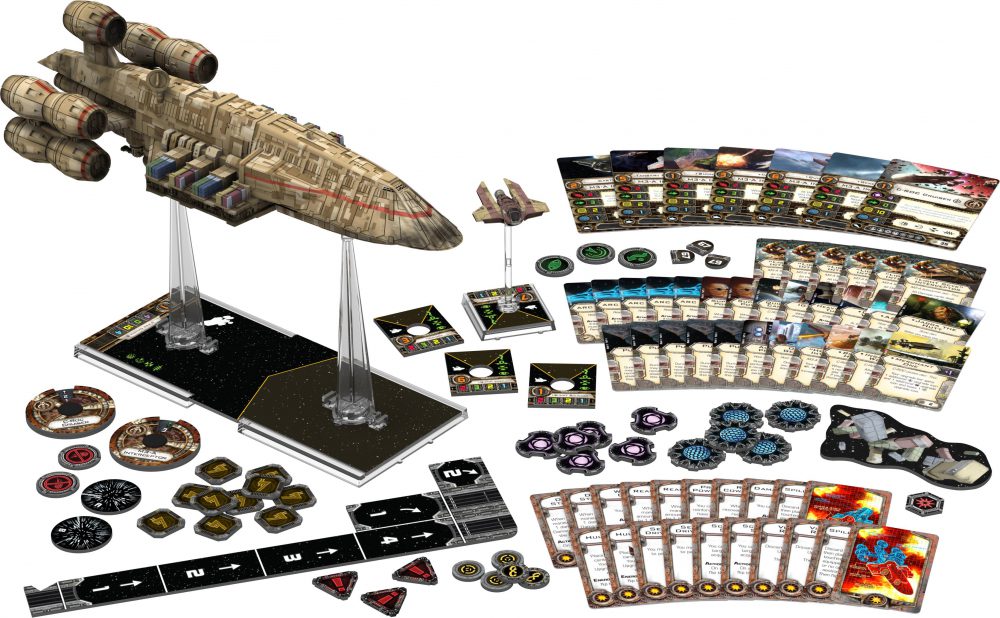 The Tantive IV expansion pack adds the Correlian Corvette to the game, able to be operated by the Rebel Alliance or the Galactic Republic. This kit includes all the cards and pieces needed to fly this swift war ship into your game. The C-ROC Cruiser, a slimy vessel with dirty tricks up its sleeves makes a perfect fit for the Scum and Villainy and Separatist factions alike. New cards and pieces included in this kit allow players to control this hulking spacecraft into war.

Within the Huge Ship Conversion Kit, veteran X-Wing players will find all the components they need to upgrade their CR-90 Corellian corvette, C-ROC cruiser, Gozanti-class cruiser, GR-75 medium transport, and Raider-class corvette ships to the second edition, including cards to field each huge ship in two of X-Wing’s seven factions.

Meanwhile, the Tantive IV Expansion Pack and C-ROC Cruiser Expansion Pack invite new and veteran players alike to harness the might of these massive craft and utilize a variety of new upgrades only available for huge ships. Look for these expansions at your local retailer early in the fourth quarter of 2019, with the Raider-class corvette following soon after, and read on for more information about what huge ships bring to your games of X-Wing!

These expansions will be available for purchase sometime in the fourth quarter of 2019, and are up for preorder on the Fantasy Flight website.