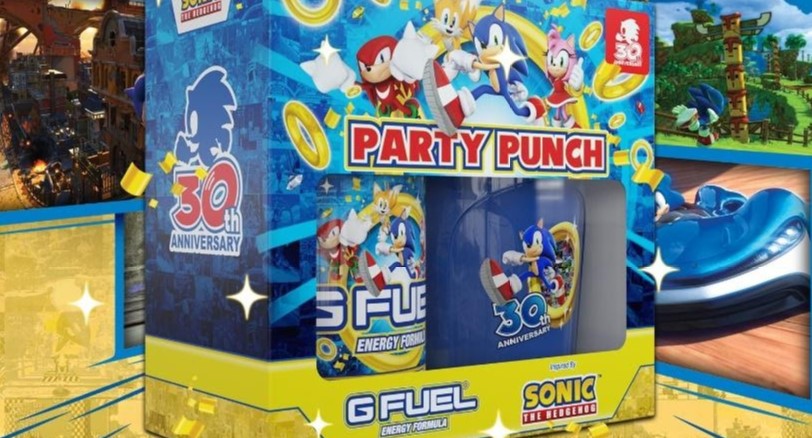 As part of Sonic the Hedgehog’s 30th anniversary celebrations, SEGA and G Fuel have teamed up to create an all new fruit-flavored energy drink inspired by the Sweet Mountain Stage in the recent Sonic Colors: Ultimate. This is SEGA and G Fuel’s third crossover drink. G Fuel Party Punch is available now on gfuel.com. Read below for more details:

Take a sip of Party Punch and you’ll end up in a dimension filled with robotic animals and rolling hills. Suddenly, a blue blur zooms past you with incredible speed. It’s followed by Tails, Knuckles the Echidna, Shadow the Hedgehog, and Amy Rose running closely behind. That’s when you realize the brand-new G FUEL Party Punch is in your hand! It’s now available for customers in the U.S. and select other countries to buy in powdered form in 40-serving tubs and limited-edition collector’s boxes, which include one 40-serving tub and one 16 oz shaker cup, at gfuel.com. 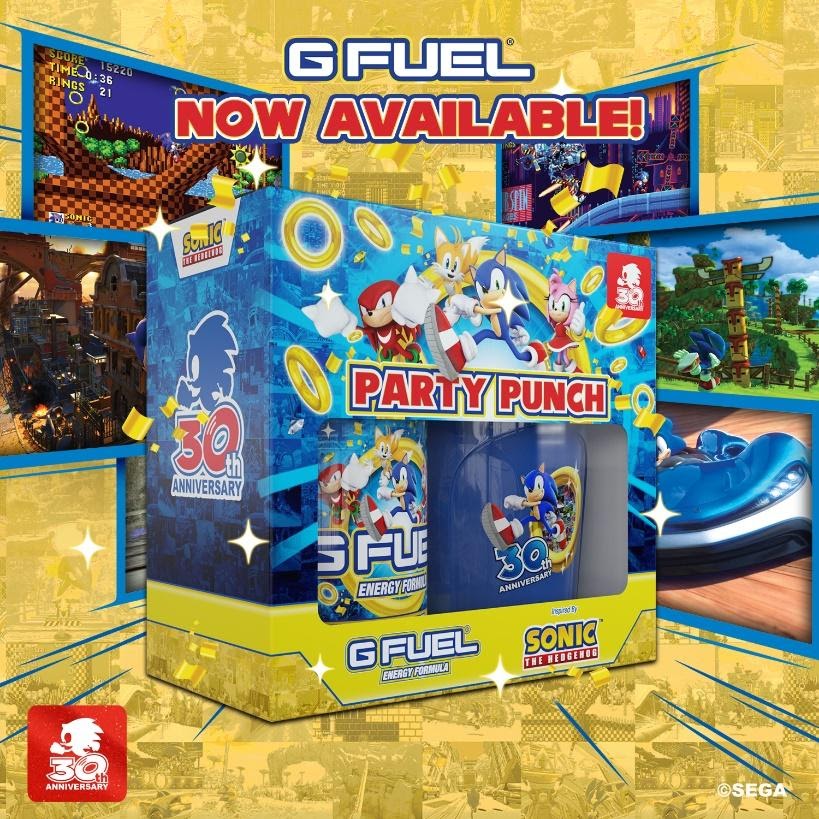 “What better way to celebrate 30 years of Sonic than with a party?” said Michael Cisneros, Manager of Licensing at Sega of America. “We’ve partnered with G FUEL to bring the celebration home with an all-new party punch flavor that will keep you moving. Toss some confetti, make some noise, and party like it’s 1991. We can’t wait for Sonic and G FUEL fans to give it a try!”

The new G FUEL flavor is sugar-free and packed with antioxidants from 18 different fruit extracts. Each serving has only 15 calories and contains 140 mg of caffeine plus proprietary energy and focus-enhancing complexes. Party Punch can give gamers the extreme energy and focus that they need to zoom through challenging worlds, free the Wisps, and defeat Dr. Eggman.Party Punch is the third flavor that G FUEL and SEGA have co-developed and launched, with the first two flavors being Sonic’s Peach Rings and the very real Sanic’s Chili Dogs.

“If you were to list some of the iconic speedsters in gaming, there’s no one that races to the top faster than Sonic the Hedgehog,” commented G FUEL Founder and CEO, Cliff Morgan. “That’s why we’re thrilled to team up with SEGA for a third time to not only give our fans something wonderful but also to celebrate 30 years of the world’s fastest hedgehog.”

Are you ready to join the adrenaline-pumping party with Sonic and his friends? Order your G FUEL Party Punch today at gfuel.com.