Critically acclaimed platformer Psychonauts 2 will receive a physical release along with a collector’s edition via iam8bit. In case you missed our review, we loved Psychonauts 2, stating, “Psychonauts 2 is the perfect sequel. It builds on everything the original game was while adding its own unique spin on gameplay and story. The overworld is a joy to explore and the levels are more stylish and dazzling than ever before with fantastic controls. It’s a fantastic experience that will stick with you, and has a ton to see and do.” You can check out a new trailer above and learn more about these physical releases and where to pre-order below:

LOS ANGELES – July 7, 2022 – iam8bit and Skybound Games, together with publisher Xbox Game Studios and developer Double Fine Productions, are psyched to reveal the physical retail and Collector’s Edition of the critically acclaimed psychedelic platformer Psychonauts 2 are now available for pre-order. The Psychonauts 2: The Motherlobe Edition will be available for Xbox Series X/Xbox One and PlayStation 4 on September 27, 2022 for $69.99 USD across retailers, with the iam8bit exclusive Collector’s Edition coming later this year for $129.99 USD along with the Essential Edition vinyl for $40 USD. Fans can now pre-order the physical edition, titled Psychonauts 2: The Motherlobe Edition, from retailers worldwide, as well as pre-order the Collector’s Edition exclusively at iam8bit.com.

“I’m very excited about this release because, “Welcome to My Mind,” has been stuck in my head since the game came out last year,” said Tim Schafer, Founder, Double Fine Productions. “I’m hoping that releasing this song into the world (along with the previously-unreleased art and the rest of the soundtrack) will also release it from my mind so I can think about other things.”

The Psychonauts 2 physical edition for Xbox Series X/Xbox One and PlayStation 4 is an imaginative experience for collectors and gifters. The retail editions come in a lenticular outer sleeve with a reversible cover sheet, and will feature a set of six two-sided art cards showcasing final art and concept art from the game, six premium die-cut  stickers along with a digital download code granting access to unreleased behind the scenes materials. 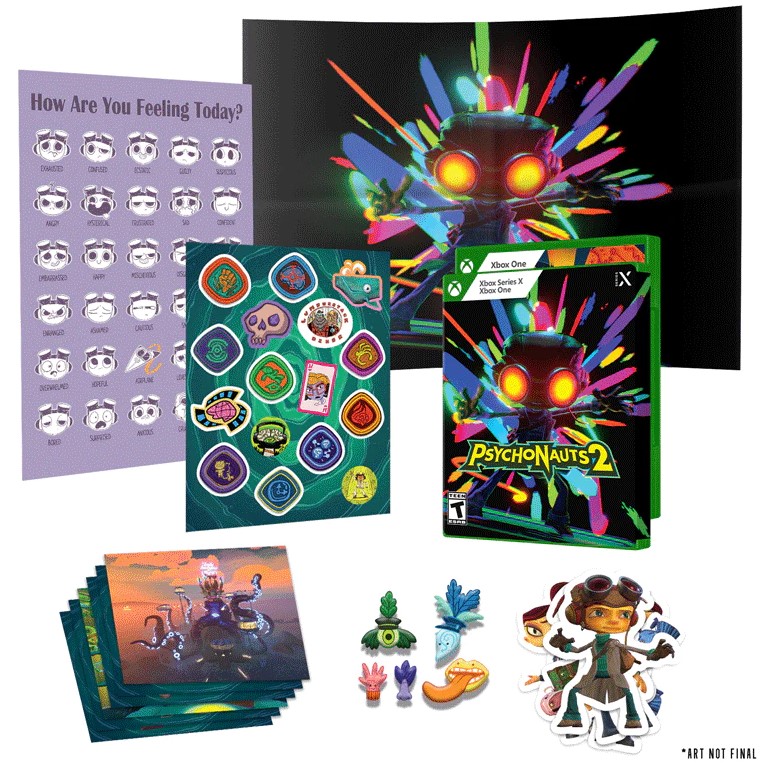 In addition to the physical editions, music lovers and gamers alike can pre-order the Psychonauts 2 Essential Edition (2xLP) and Complete Edition Box Set (6xLP) vinyl records! These psychedelic records feature music from the game by Peter McConnell and album art by Arno Kiss. The Collector’s Edition will come in a premium keepsake box, with a hypnotic slip mat, and includes all three soundtrack volumes as well as the track “Cosmic I” featuring Jack Black. Lastly, fans will be able to complete their Psychonauts 2 dream collection with a 250+ page art book, available for pre-order now for $50 USD on iam8bit.com.

Hailed as the most imaginative platformer that money can buy, Psychonauts 2 took home numerous Game of the Year awards, including “Xbox Game of the Year” at the Golden Joystick Awards ‘21, and multiple category nominations at The Game Awards, DICE and BAFTA Game Awards. The sequel has modernized the cerebral elements of the first game that have fans coming back for even more content.

Psychonauts 2 funnels its strange landscape through the lens of a 10-year old dreamer with psychic abilities, allowing fans to experience dark, panic-inducing dangers with the empathetic naivety of a child. Though fans themselves have waited over 15 years for the sequel to Psychonauts, only a few days have passed for our aspiring Psychonaut, Raz. Instead of a full-fledged Psychonaut, Second Head of the Psychonauts Hollis Forsythe plops an ‘Intern’ tag on Raz’s chest, setting off a new adventure with wacky characters, mental worlds to explore, and sinister happenings to fix behind-the-scenes.