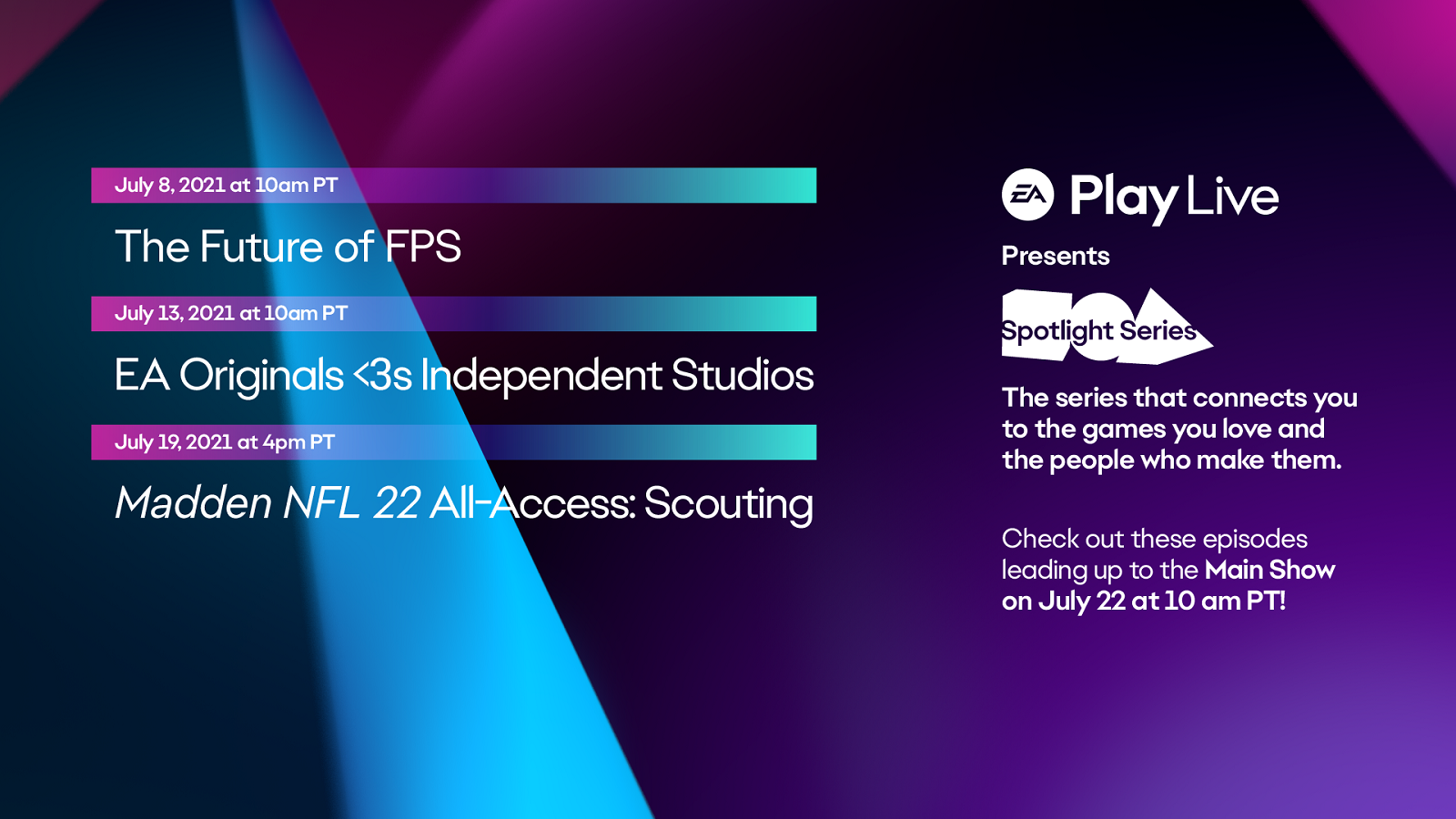 Today, Electronic Arts announced that while its EA Play Live event will broadcast on July 22, gamers will be able to watch a few new spotlight showcases earlier, with EA Play Live Spotlight events heading to screens starting July 8. Everything from FPS games to sports titles will be revealed in-depth during these showcases.

July is going to be a busy month around here. This year, EA Play Live is more than just a single broadcast. Today we’re excited to announce a new EA Play Live series leading up to the Main Show that’s happening on July 22nd at 10:00am PT / 7:00pm CET. We call it EA Play Live Spotlight, and it’s all about connecting you to games you love and the people who make them. This means throughout the month of July, we’ll have five different broadcasts total, made up of four individual Spotlights to start and then the one main show. An easy way to think about Spotlights are they’re like panels, where the main show is a collection of our games with new things to reveal.

In these Spotlights, you’ll hear people from DICE, Respawn, EA SPORTS and our partner studios behind the EA Originals games. These talented developers will give you insights into what they’re making and how they’re doing it, and they may even drop some new news while they’re at it. Each of the Spotlights will very much be its own event, featuring wide-ranging discussions with a dedicated host and a panel of developers.

“Every year we host EA Play Live to connect with our fans, to show them the games we’re creating, and to hear from the people who are making them. This year, EA Play Live will be a series of events that allow you to watch what you want to watch. We’ll have bespoke episodes for sports, shooters and EA Originals that will lead into our show on July 22nd.”

Let’s take a look at what’s coming this month:

The Series kicks off with an extensive discussion of two of our most exciting shooters: Apex Legends and the just-revealed Battlefield 2042 (special thanks to our Battlefield community for showing up to watch us during E3, we have more coming in July).

For the Spotlight, DICE’s General Manager Oskar Gabrielson and DICE LA’s General Manager Christian Grass, and Respawn’s Founder and Group GM Vince Zampella and Chad Grenier, Apex Game Director, will join host Stella Chung of IGN to discuss the Battlefield 2042 reveal, what to expect to see from both games on July 22nd as well as the future of FPS games as a whole.

We love seeing innovation in the industry and we love partnering with studios who have that same passion. So we’re devoting an entire Spotlight to the vital role indies play in the industry. Todd Martens of the Los Angeles Times will host a panel featuring Josef Fares of Hazelight (It Takes Two), Olov Redmalm of Zoink (Lost in Random), Mel Philips and Abubarker Salim of newcomers Silver Rain, and Guha Bala of Velan (Knockout City™). This is guaranteed to be a spirited and wide-ranging discussion!

Fans always influence their favorite games. This year, EA SPORTS™ Madden NFL 22 is taking that idea to a new level by putting the voice of the player at the heart of the development process earlier than ever via the Madden Design Council. Find out how fans impacted the development of Franchise Mode and helped bring to life highly requested features like Staff Management, weekly game strategy and a new scenario engine.

Plus, did we mention you’ll get the first ever deep dive reveal of the brand new scouting feature coming to Madden NFL 22 via a live service update targeted in September? Join EA SPORTS’ Seann Graddy, Tom Lischke, and Andre Weingarten, as they come together to discuss the vision for their ultimate sandbox mode, Franchise. Not to mention, the panel will be hosted by Nick Mizesko, longtime play-by-play announcer for the Madden Championship Series.

Look, we’re not allowed to tell you much about this one yet, sorry. But we can say this Spotlight will highlight an extremely cool new addition to an extremely popular and long-running EA SPORTS franchise. We may have said too much already. Just keep your calendar free, OK?

“We love the panel format because it allows for great conversation to flow naturally, and who isn’t curious to hear what Josef is going to say next? Fans are going to see the personalities of the people who make their favorite games come through, and they’ll see how passionate they are about what they do.”

With all these Spotlights, you may be wondering what will be left for the main event. The answer: a lot. Diving deep in the Spotlight series allows for the EA Play Live main show to make games the unwavering focus, with new gameplay reveals, a few giveaways and other surprises. Lifelong gamer and WWE superstar Austin Creed will host the event and keep things moving right along.

Now, obviously we can’t tell you everything that will be there on July 22nd. But we can tell you that this year EA Play Live will start at 10:00am PT / 7:00pm CET with a short pre-show that serves as a recap of sorts, before the main show brings the real excitement, focusing on games that are coming out soon rather than in the all-to-distant future. The show is a fast-paced one, coming in around 40 minutes and will feature what’s next for games like Battlefield 2042 and Apex Legends. You’ll also see the first gameplay for Lost in Random, featuring explosive dice battles, time-freezing tactics and card collection. We’ll have a couple other games to highlight as well, but for those, you’ll just have to wait and see.