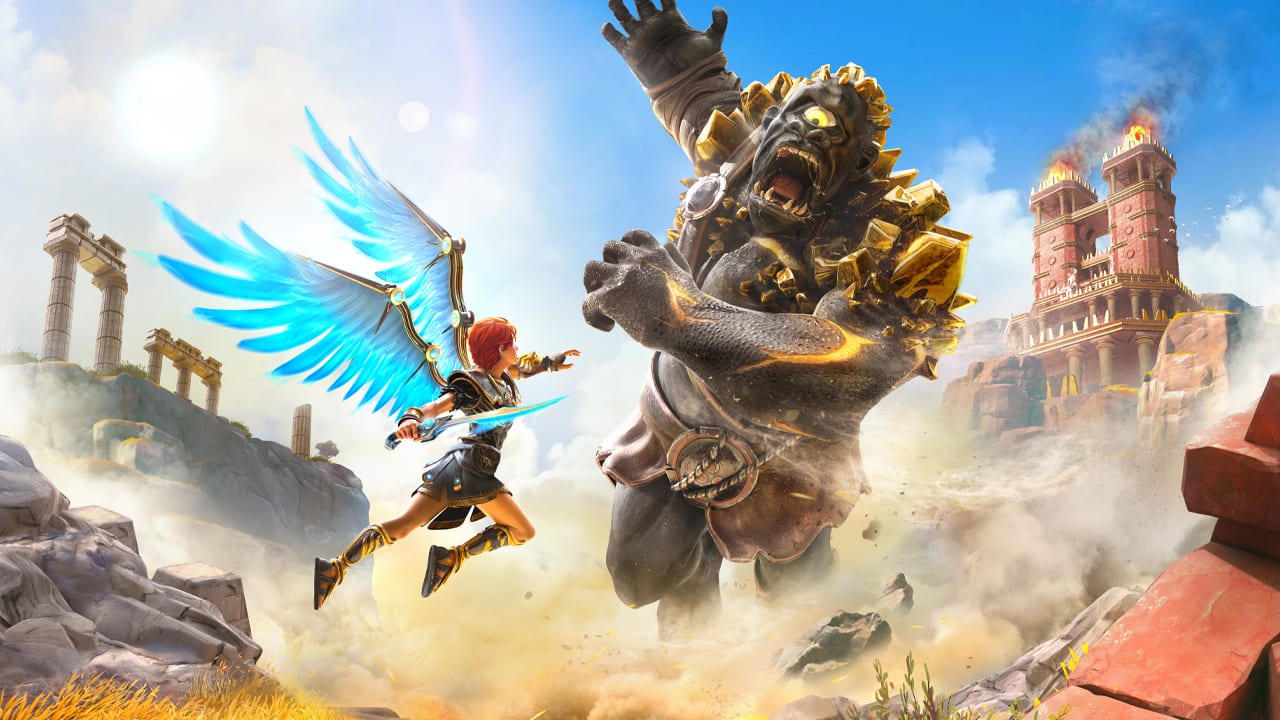 Recently I’ve gotten my hands on that used to be known as Gods and Monsters. It’s rare that a game surprises me as I usually have a really solid idea of what’s on the horizon. This is one of those moments where I was happily surprised. This fresh IP, now entitled Immortals: Fenyx Rising, follows a familiar open-world approach we’ve seen time and again in Ubisoft titles, but after spending two hours with the game I’m happy to report that it seems to be shaping up to be something entirely new.

We jumped into our demo midway through the game. Fenix already had unlocked a series of weapons and armors, as well as a standard raft of upgrades. Since much of the team worked on Assassin’s Creed Odyssey, I expected to see a steady stream of weapons, armor, and upgrades. I was surprised that none of that exists here. Instead, the team is focusing hard on three central pillars — traversal, combat, and puzzles. 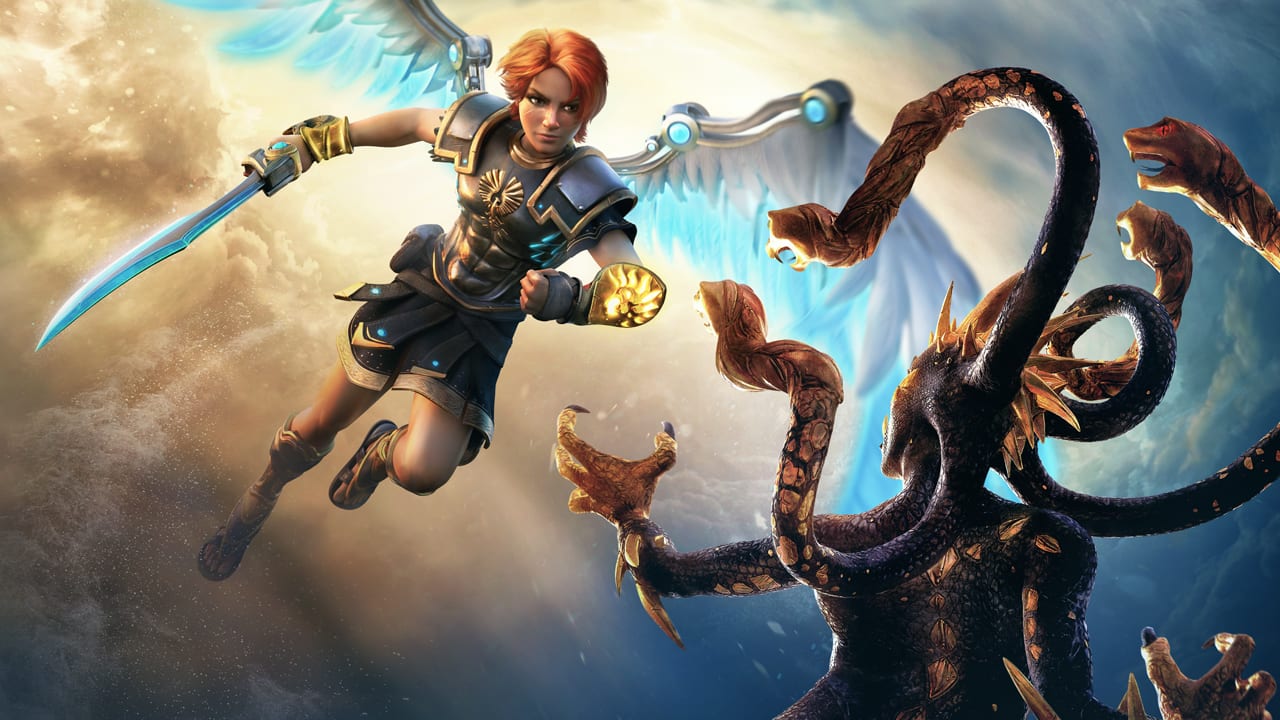 The main story of Fenyx Rising revolves around Typhon — a beast imprisoned by Zeus that has broken free from his chains and intends to destroy the entire pantheon of Olympian Gods. It’s up to Fenyx to find and stop him before it’s too late. Unfortunately, Typhon has already begun his dark deeds, ripping the veil between worlds and unleashing horrible monsters from the depths of Tartaros to stop you. But who is Fenyx?

Fenyx is a seemingly simple human (male or female, your choice), shipwrecked on the Golden Isle and somehow granted access to some of the weapons and equipment of the most well-renowned heroes of Greecian legends. The Sword of Achilles, Bow of Odysseus, and the Hammer of Hephaestus, are just a few of the weapons you’ll be granted should you take this godly quest. Equipped like a hero, you’ll also be granted powers from the likes of Ares and Athena to aid your journey.

With one of the central pillars of Immortals: Fenyx Rising being traversal, you’ve been granted access to the Wings of Daedalus. These angel-like wings let you take to the sky and soar to anywhere your eyes can see — the entire game world is unlocked as soon as you acquire your godly weapons and gear. 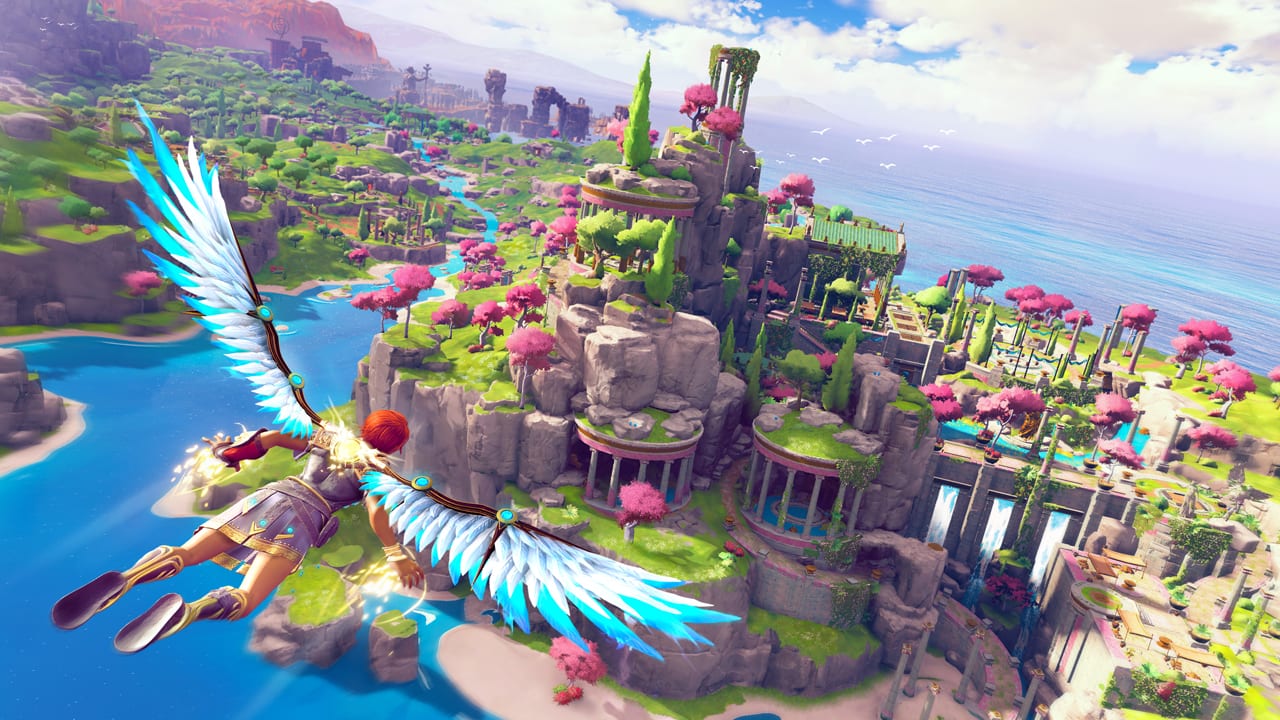 The Wings of Daedalus are a crucial part of your adventure

There is a progression system for Fenyx, and it revolves around finding specific elements in the world. Lighting is used for upgrading your stamina, powering your attack moves and gliding capabilities, ambrosia lets you upgrade your health, and new skills and attacks are unlocked through the collection of Coins of Charon. You’ll find these coins through solving puzzles and prevailing in tough battles. Weapons can be further honed by finding Shards of Adamantium, though we didn’t get to see that for ourselves during our time with the game. Fruits and other items found in the field can be used to upgrade your potions — a key tool to keep you healthy, full of stamina, and occasionally granting you additional strength through better chemistry.

Much of what I saw in my demo showcased an emphasis for puzzle-solving and combat, with a whole lot of humor throughout. Zeus (voiced by Elias Toufexis) and the titan Prometheus are your constant companions in your head, whether you like it or not, and they are doing their best Statler and Waldorf impression. They break the fourth wall, they have casual conversations as if you weren’t there, and they generally try to act the part of Gods, while also revealing that they are often as lost as you are. This turn towards comedic elements lines up perfectly with the Greecian traditions of comedy and tragedy. 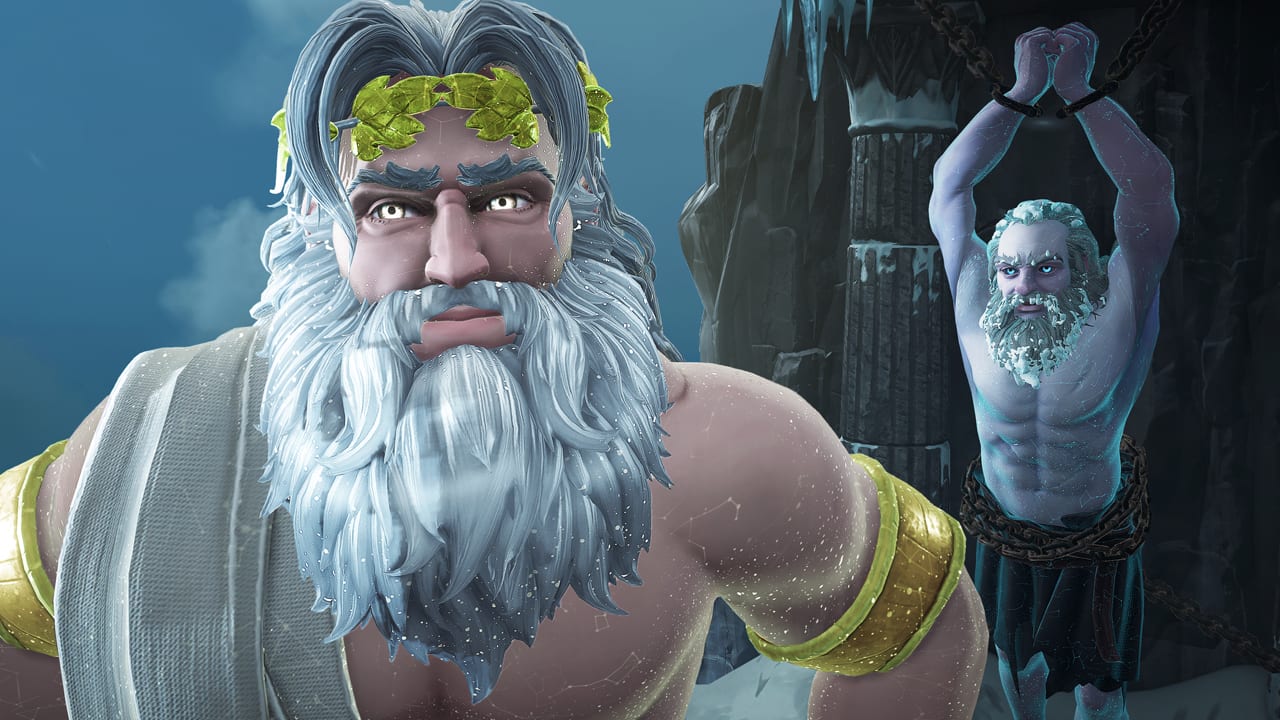 You’ll find familiar faces of the pantheon at your back.

Cyclops, minotaur, medusae, and cerberus dogs roam about the countryside of the Golden Isle, joined by all manner of automatons and beasts intent on ruining your adventure. These mini-boss creatures create a great opportunity for puzzle solving, as well as a test of your combat skills. Finding weak points and exploiting them, using your wings to out-maneuver these creatures, and finding the best combination to defeat them will take a little time. To help you defeat these monsters, there is a new mechanic revolving around stunning creatures. Do enough damage or hit them in a specific spot and you’ll see a blue meter under their health bar begin to fill. Fill it enough and they’ll stagger, often falling down and leaving themselves vulnerable to an all-out assault. It’ll be fun figuring out the best way to stop these monsters.

When you are facing enemies, you’ll always have access to your bow, axe, and sword — staples of any combat-focused game. These tools let you rack up damage, as well as filling your stamina meter which lets you unleash your godlike granted abilities such as the aforementioned Athena’s Dash and Haephestos’ Hammer.

Beyond combat, my favorite part of this demo came from puzzles in the overworld and the vaults (there are over 60) hidden throughout the Golden Isle. With a nod to obvious-inspiration titles like The Legend of Zelda: Breath of the Wild, these often involve using physics and logic to manipulate puzzles until you can reach the chest they are holding secret. The Trials of Tartaros offer an even bigger challenge, pitting stronger foes, devious puzzles, and tougher platforming against you. There are even combat-focused puzzles like we’ve seen in games like God of War.

Completing vaults grants bolts of lightning that Zeus has scattered throughout the world, granting Fenyx with upgrades to her powers and skills. Beyond these upgrades, there are also crafting materials you can gather in the environment to craft consumables and gear. With a nod to the ever-important “looking cool” factor, all gear can be set to whatever visual style you’ve uncovered. If you have a shiny new helmet but you want the stats on your old and rusted one, you can do exactly that, once you’ve discovered the right skin for it. Certain attributes are tied to skins, but you are free to apply the visuals how you see fit. As the team has focused more on rewarding the player with new experiences rather than a fresh sword with a new number on it, it has freed them to give more emphasis to the story — something I came to appreciate very quickly. 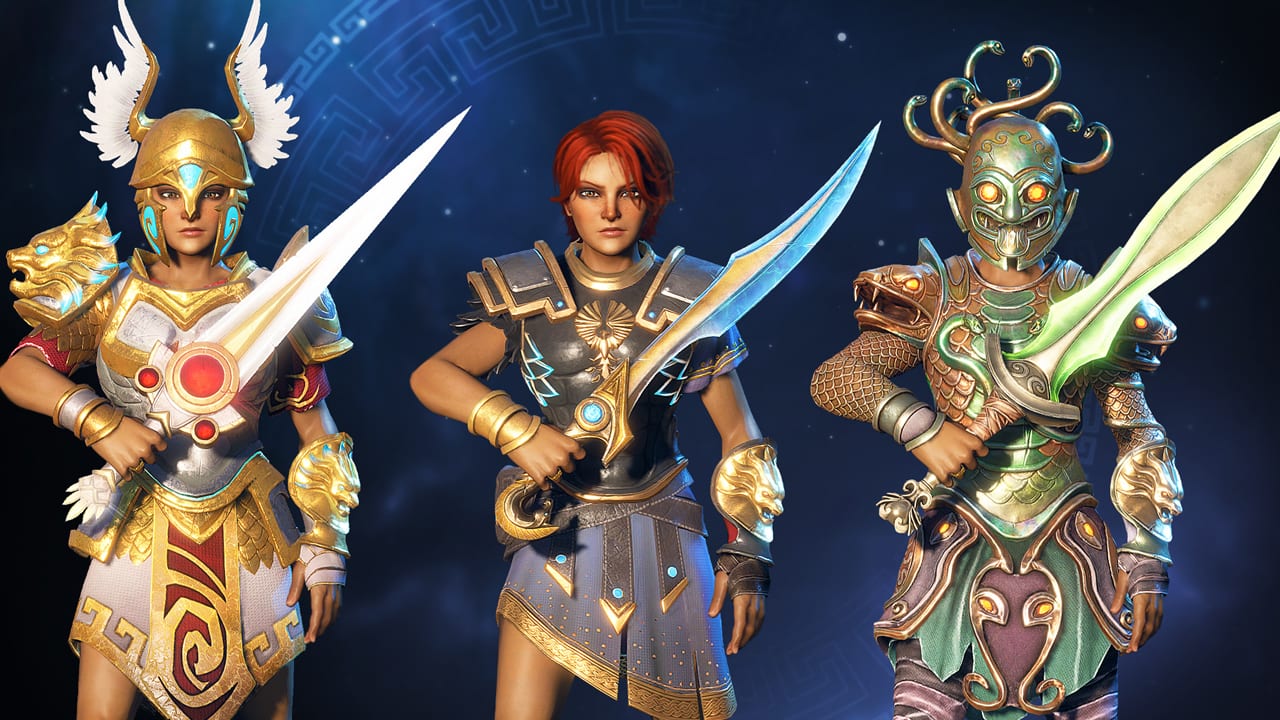 Look how you want, once you’ve found the skins.

Our demo only covered a very small portion of the seven distinct regions — specifically the Forgelands — the land of Hephaestus, forgemaster of the Gods. Here, I had to re-light the God’s forge by carrying coal to the forge and then lighting it by guiding an arrow through a fire and into the heart of the machine. We got a brief look at some of the other portions of the world, and they might as well be seven different planets as they are as varied as possible. It’ll be fun to explore them all.

I enjoyed the frenetic aerial combat in the game, and the exploration is good fun, but from what I’ve seen so far it’s the puzzles that are the heart of Immortals: Fenyx Rising. In just two hours I managed to reassemble some notes from a giant lyre, rebuilt a constellation of Canis Major, completed a number of challenging platforming puzzles, and tackled several combat sequences that were more easily solved through cunning than swordcraft. If the team at Ubisoft Quebec set out to make me feel like an awesome demi-god, they’ve succeeded.

It’s always fun when something pops onto your radar while you weren’t paying attention. I’d all but forgotten about Gods and Monsters, and now having played Immortals: Fenyx Rising, I can say that this game looks like it’ll turn out better than that 2019 trailer even promised.

Immortals: Fenyx Rising is coming to Xbox One, Xbox Series X/S, PlayStation 4 and 5, Stadia, and PC on December 3rd, 2020. Stay tuned for more on this game as we get more hands-on opportunities right here at GamingTrend.com