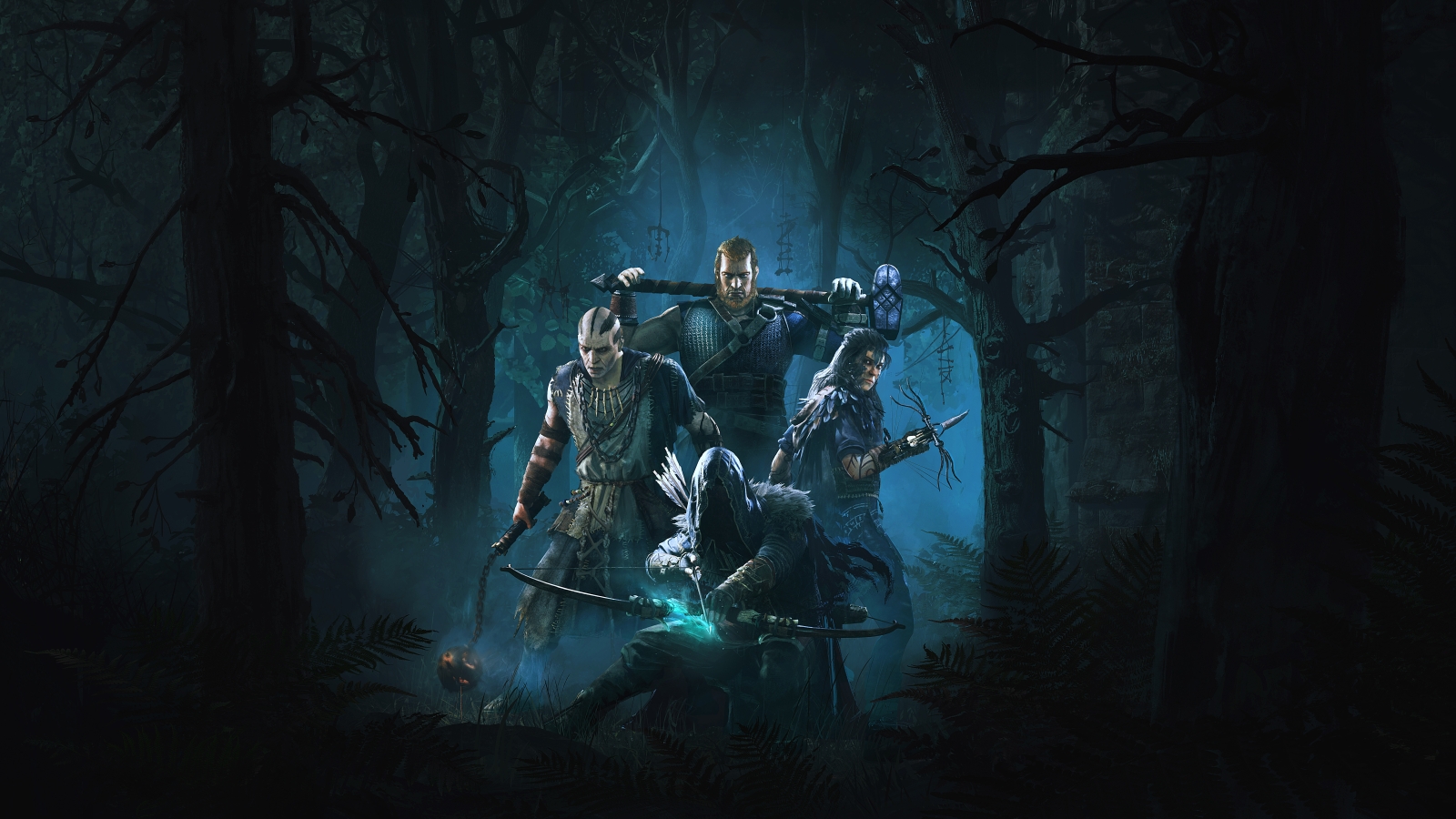 Gaming Trend got to hop into Hood: Outlaws and Legends this week, the new PvPvE multiplayer game from Focus Home Interactive. Hood has taken some of the classic Robin Hood characters and put a gritty twist on them. After choosing one of four characters, you’ll participate in Heists, where you’ll be fighting against the clock to beat the enemy team. There are three objectives: to steal the key from the Sheriff, make your way to the chest, and safely extract said chest. All the while you have to avoid NPC guards, as well as the other four players on the enemy side.

In theory this sounds really cool, but Hood has a few major issues we could not get over. Fellow GT editors Ron and Laura Burke joined my husband David and I to see what this game really had to offer, and we came out feeling quite let down in its current state. One of the biggest issues we ran into was actually being able to play together. Hood: Outlaws and Legends boasts that it supports cross platform play, as well as being able to play together on different gaming launchers (i.e. Steam and Epic Store). For testing purposes we wanted to see how this worked, and easily spent over 40 minutes of our gaming session trying to get all four of us in the team together. Ron and Laura were on Epic, while my husband and I were on Steam. Each of us had to restart our launchers multiple times throughout our gaming session, not to mention each time we’d enter back into the Hideout after completing a Heist it would kick at least one of us from the group. 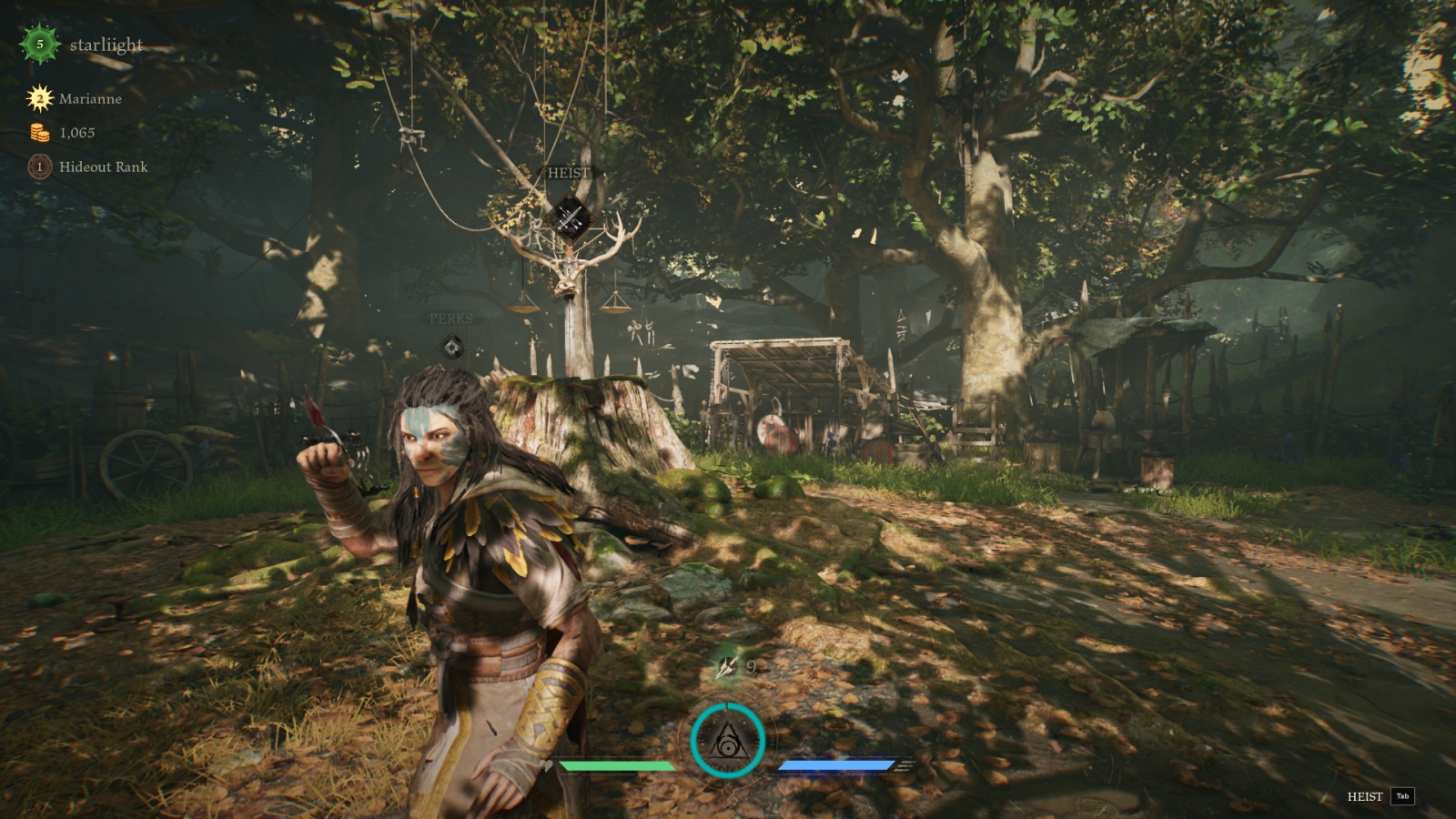 Hanging out in the Hideout.

Once we were finally all in the group, we each grabbed a character to test how they operated. I chose Marianne, the Hunter class that has a stealth ability for her ultimate. She uses a crossbow and smoke grenades, and excels at quick takedowns. David chose Tooke, the Mystic whose ultimate heals party members. He has a flail which can attack from a short distance. Ron picked John, the Brawler, he can carry the chest the quickest once you find it, can open portcullis gates, and smashes heads in with his huge hammer. Laura chose Robin, the Ranger class, he uses a longbow and can fire flash grenades to stun from far away. He’ll also be your sniper. 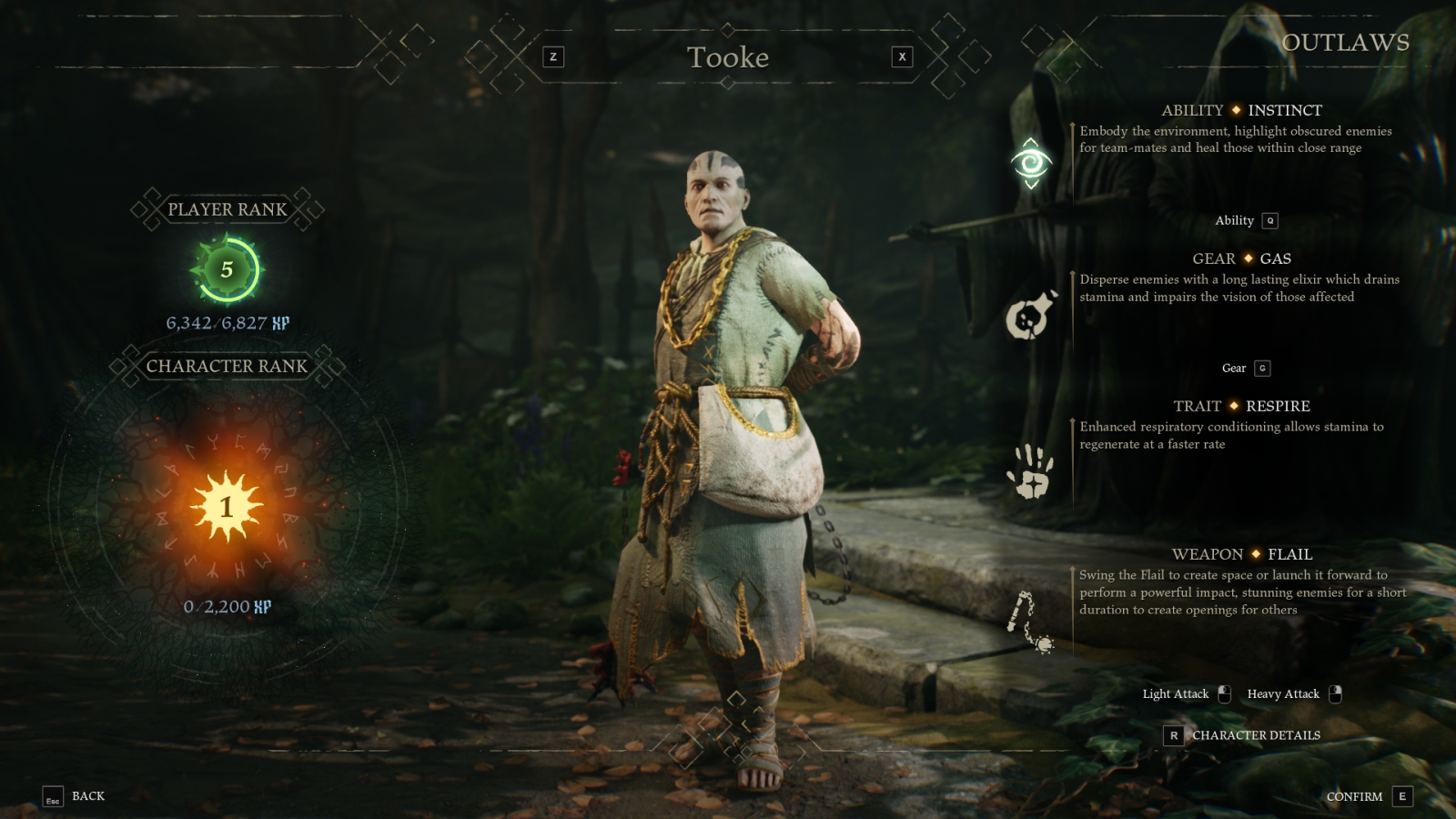 A look at Tooke’s abilities.

We didn’t really have an issue with the classes themselves so much as how clunky the combat is. My husband’s number one complaint is that Hood was clearly made to excel on console, and the controls didn’t translate well to PC. As an example, instead of sidestepping, your character moves forward and then turns into the direction you’re moving which can cause you to bump into the person you’re trying to line up an assassination on. I also found myself getting stuck, like Velcro stuck, onto tree stumps, walls, and NPCs while trying to both attack and navigate. The combat actions are very clunky and slow, as an example I will compare it to a game like Overwatch where movement and combat feels fast, fluid, and accurate. I don’t know how Hood might play on console, and am only speaking for how our experiences went on PC.

To add to the issue with controls not translating from console to PC is how the E and R button both do several major things that can be detrimental if you hit them at the wrong time. With R you can tap it to whistle, or hold to pick up a rock to throw. If you press it to distract a guard and accidently whistle instead, you’ve just alerted every guard in the place. E is the general interact button, but it also happens to be the assassinate button. If you’re near a wall a guard is standing by, you can very easily jump over the wall instead, alerting the guards instead of assassinating them.

The other huge problem we ran into was that, on day one of launch, our team at levels 1 and 2 were going up against teams that were already level 45+. The matchmaking was seriously off, as these higher levels already knew the maps, and possible spawn locations of the chests which gave them a HUGE advantage over us. I’ve launched the game a few more times on my own to see if it was any better, and got the same result. I’ve also spent a handful of matches waiting more than five minutes trying to get into a team. 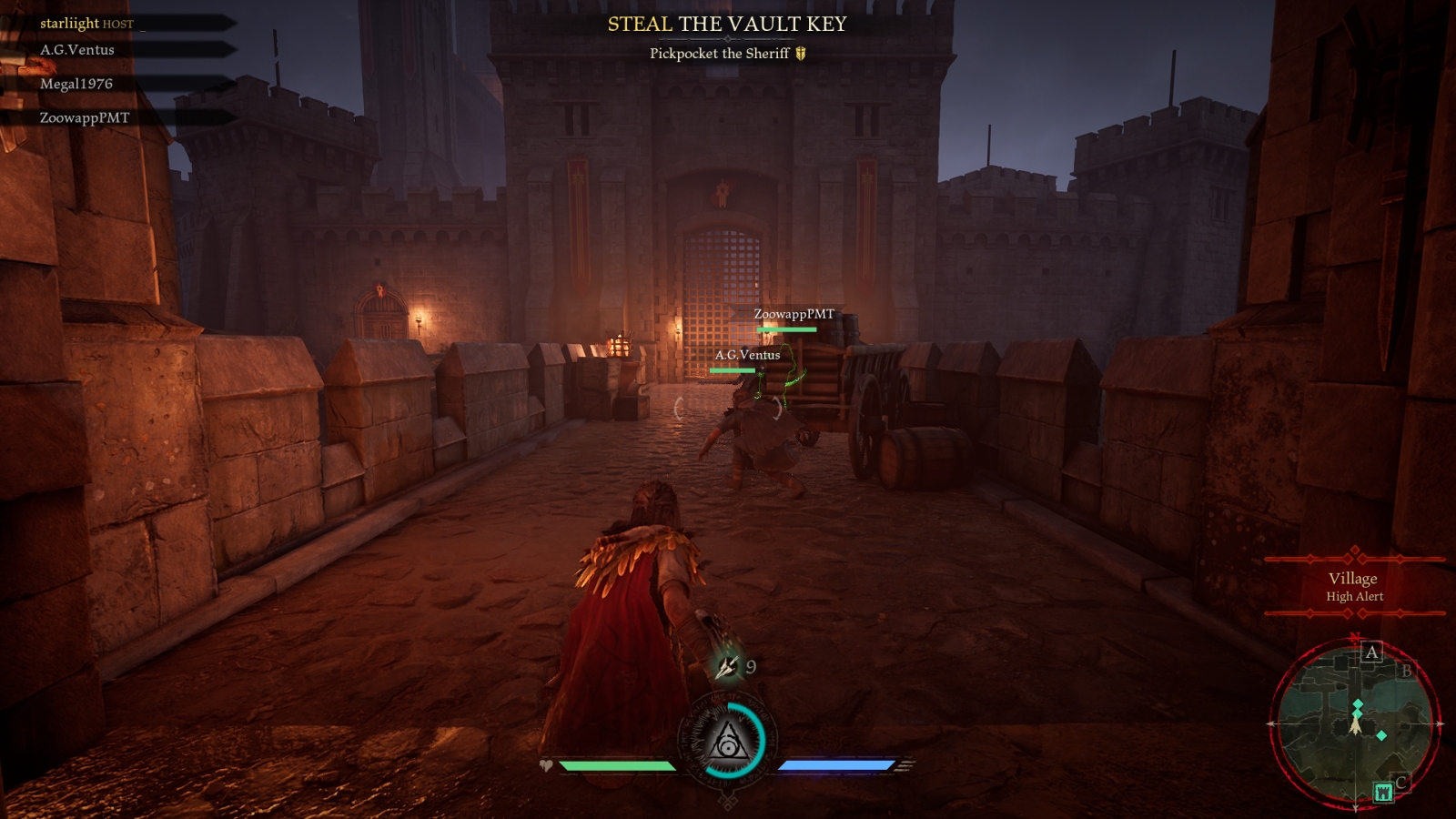 Me in a random match where we got steamrolled in under five minutes.

Hood launched with six maps, with another coming mid-June, and each match places the chest in a different location. The mini map was not very helpful most of the time. The key to this game, in my opinion, is learning these maps and escape routes. Without this, you’re flying blind. We spent a few matches going against the computer AI to try to get a feel for the game, and I’d have liked to have played against real players where we were on even footing, but that wasn’t the case. It honestly took the fun out of the game for me, as the higher level enemy teams clearly knew where to go, the perches to sit in to take us out, and had no issues getting the chest to the extraction point because of this.

Hood has a few cosmetic options for both clothing and weapons, which you can change in your Hideout. Most of these are locked behind level or achievements. Each specific character can also apply Perks once they hit levels 2, 4, 5, 8 and 10. You can only have three Perks equipped, and while they don’t give the character a HUGE boost, it’s enough of an advantage that a level 10 with three Perks equipped has the upper hand over a level 1 or 2. 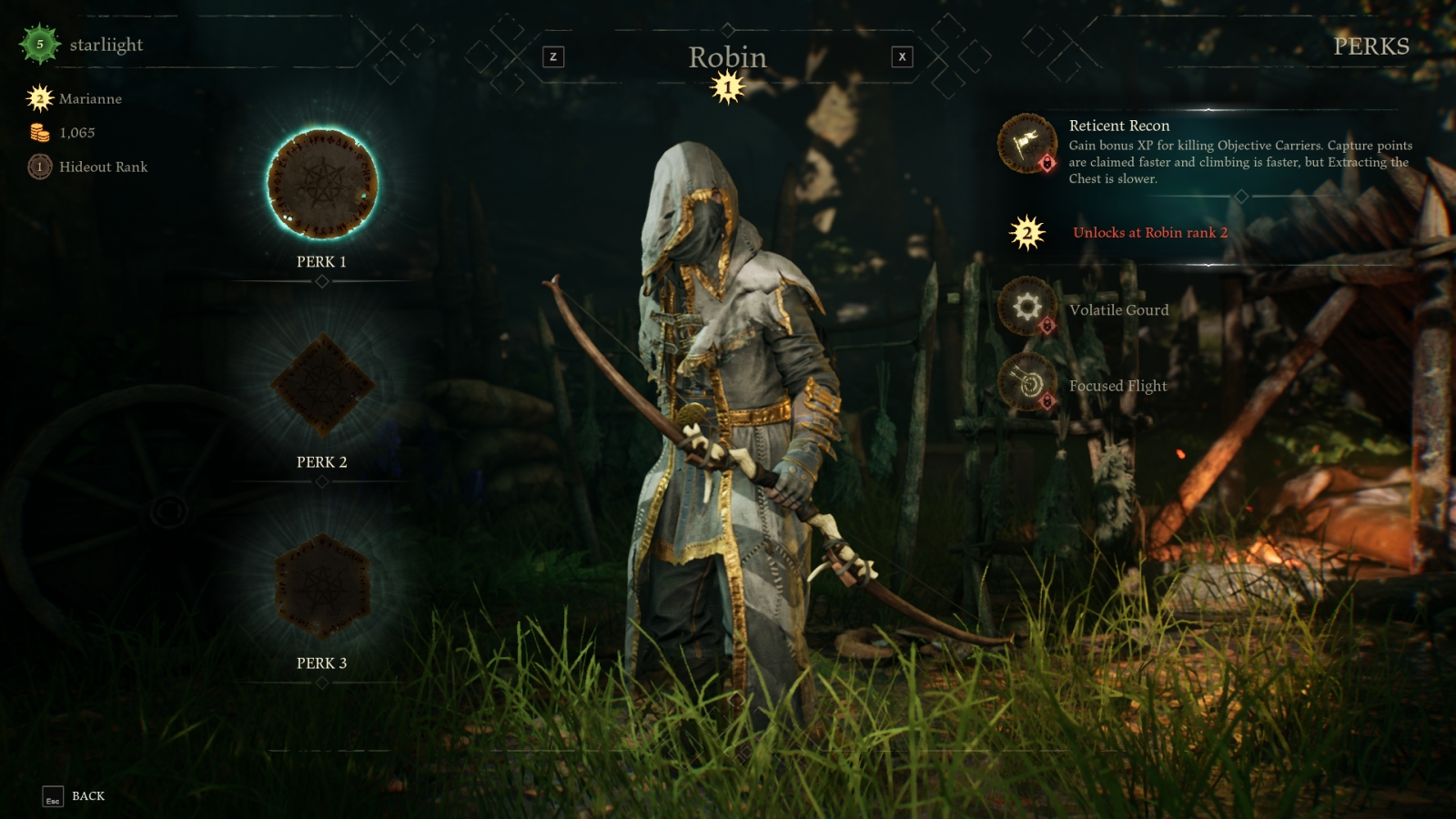 A glance at the Perks menu.

I really enjoyed the graphics and overall look and feel of Hood, but found that the character voice lines were repeated over and over, and it just felt lifeless because of it. There is so much potential with this game, and the concept is really neat, but it’s just not quite there in its current state.

At the end of our group session all of us left Hood feeling really frustrated, with both the cross platform grouping issues, and the huge gap in matchmaking. I really don’t want to play this game against a computer to learn the maps, as the big draw to it is playing against another PvP team, but when you’re constantly getting pitted against people who steamroll you it takes the fun out of it. Along with the clunky controls I am finding it really hard to want to reach for Hood to push past these early levels.

Now for the good news which we just received today, is that the developers at Focus Home Interactive have been reading the comments and suggestions from players, and are already releasing a patch on Monday, May 24th to (hopefully) address the matchmaking issues. It looks like they may be adding a new outlaw, along with the previously mentioned map named “Mountain”, as well as a mention of two new modes, PvE and Hardcore.

Because of this, we’ve decided to hold off on a final score for Hood: Outlaws and Legends and see what the next few patches might bring. Stay tuned for more information and updates.

Holly Hudspeth is a best-selling author living in Fort Worth, Texas. She has six published novels to date; The Skyy Huntington Series, which is an epic dark fantasy adventure, and One Small Detail, a stand-alone medieval fantasy. Holly also enjoys writing fan fiction based on her avatars from games such as EverQuest, Elder Scrolls Online, and World of Warcraft. Her first major purchase at the established age of nine was the NES, and she has been gaming ever since. She enjoys fantasy games, city builders, RPGs, MMOs, SMITE, and The Sims franchise. Most nights she is in SMITE with her husband and friends, or playing ESO. When she isn't gaming, she is probably either at Disney or planning her next trip there.
Related Articles: Hood: Outlaws and Legends
Share
Tweet
Share
Submit