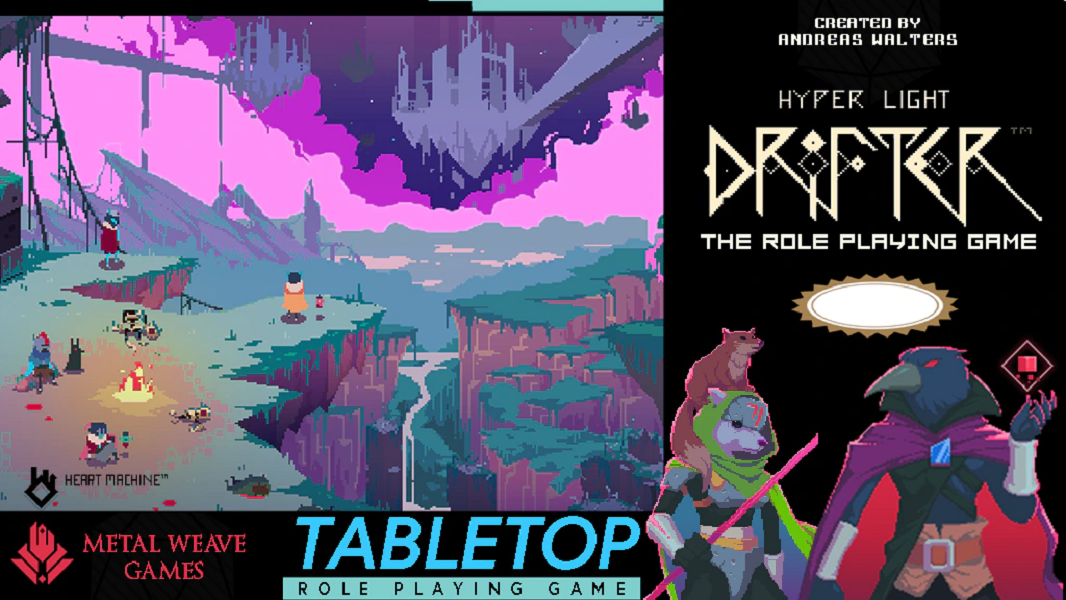 Metal Weave Games is creating a tabletop role-playing game based on 2016’s action RPG, Hyper Light Drifter. If the Kickstarter campaign is successful, the team will create a SNES styled Drifter Starter Box, Drifter Game Book, a 100-page rulebook that gives players all of the mechanical rules needed to play, Drifter Setting Book, a 164 hardcover systemless book detailing a new continent of the Hyper Light Drifter universe and more, and the Drifter Online Resource and Community.

The world of Hyper Light Drifter is that of a post-apocalyptic, science fantasy. Remains of the prior civilization are scattered across the landscape, and below them lie vast networks of underground facilities. Among these ruins are a number of safe havens, sanctuaries, at least relatively safe.

Outside of the relative safety of the sanctuaries lie a dangerous and unforgiving world full of wild creatures, various mutations, and rampant automatons. But where there is danger there is always much to be gained.

The technology could be discovered that can be re-purposed to rebuild society, make life better, or make a few upgrades to yourself and your equipment. Valuable medicines and food, as well as new materials for crafting and re-purposing. The possibilities are endless in such a setting.

The system will feature each character with their own energy pool, d20s that only the players roll, three different thresholds for rolls (failure, partial success, and full success), disciplines, boosting, combat board, and dashes. While all tiered backers get their name in the Credits Section of the Game Book, here is the full list of tiers:

Hyper Light Drifter: The Role-Playing Game’s Kickstarter campaign will run until October 13th, 2019. To pledge to the campaign, check it out here.