Yesterday, Bigben and Frogwares released a new video for its upcoming game The Sinking City, which will be released soon on PlayStation 4, Xbox One, and PC. The video highlights new gameplay mechanics as the player investigates the horrors of their surroundings.

The video plunges the player straight into the game’s mysterious universe: Charles Reed, the detective, is scouring the streets of Oakmont and investigating the cause of the supernatural elements and madness that are devastating the town.

As Charles, the players will be completely on their own in their investigation, helped only by their observational skills and their trusty notebook. They’ll need to explore crime scenes, collect information, and question the inhabitants without any hints or assistance. While some challenges might be easily resolved, others will require using Reed’s unique abilities, such as Retrocognition, which allows him to replay past scenes. 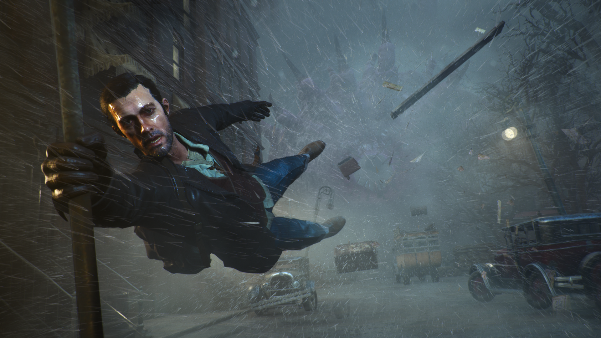 In order to succeed in their investigation, the player will need to collect clues, figure out what they have in common, and try to back up their theories using one of the game’s essential tools called the Mind Palace. While it will let the player submit their hypotheses about potentially guilty parties, it will never tell them whether they’re on the right track. The player will have to accept the consequences of their choices.

Taking place in the ‘20s, The Sinking City is an action and investigation game inspired by the works of H.P. Lovecraft, the master of horror. The player embodies Charles, a private detective, who comes to Oakmont, Massachusetts in order to investigate the cause of an unprecedented supernatural flood. Within this oppressive, murky atmosphere, the player must discover the origin of whatever has taken control of the city and the minds of its inhabitants.