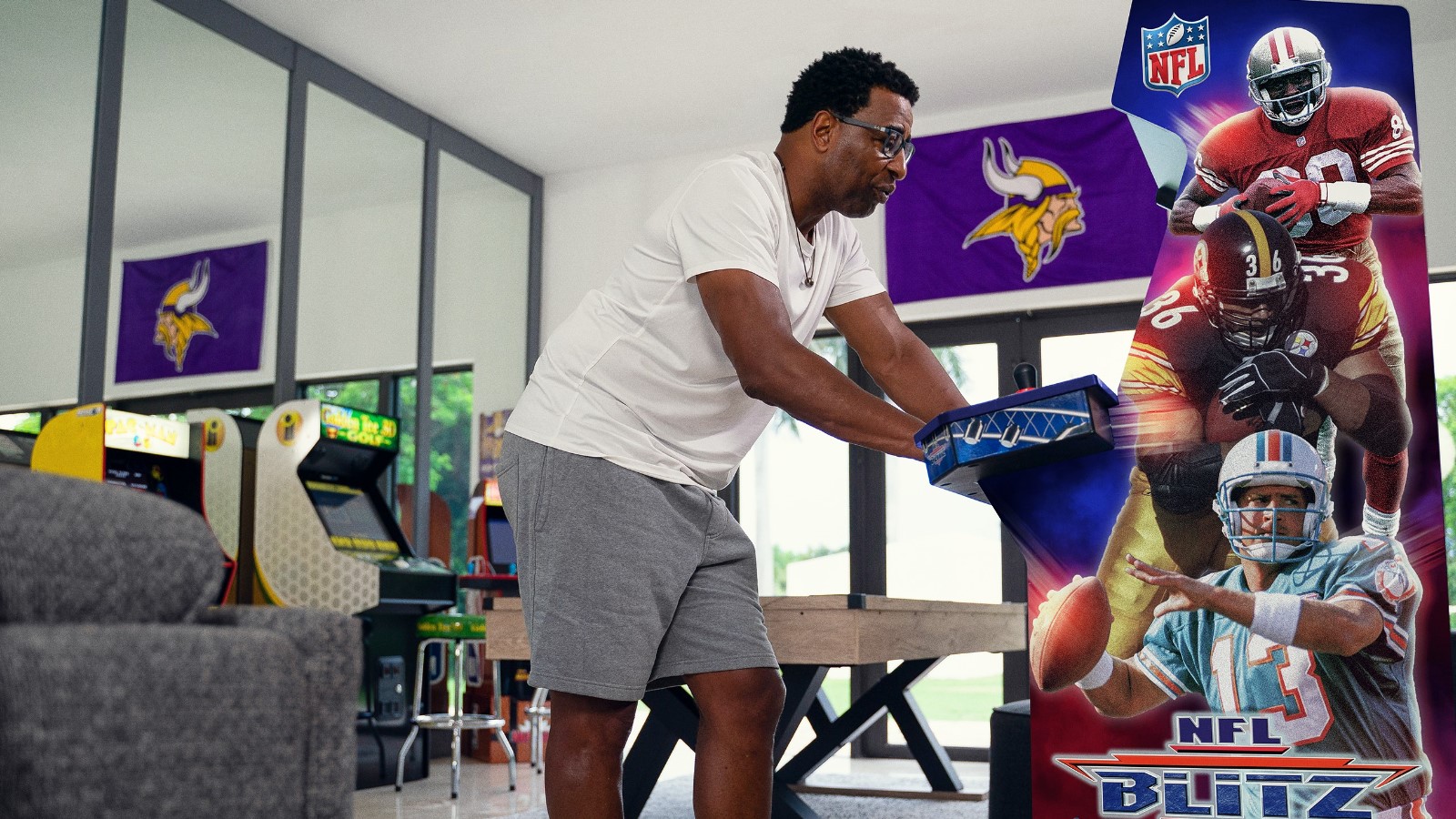 Arcade1Up and the NFL have teamed up to release NFL Blitz Legends, the latest in Arcade1Up’s line of faithful arcade recreations, just in time to celebrate the 25th anniversary of NFL Blitz. NFL Blitz Legends features three popular titles: NFL Blitz, NFL Blitz ’99, and NFL Blitz 2000: Gold Edition. Players can compete for high scores on the live leaderboard, and in the coming weeks, compete with each other via multiplayer functionality. Read below for more details on this exciting release:

New York, NY and Miami, FL – November 3, 2022 – The National Football League (NFL) and Arcade1Up, the leader in retro at-home arcade games, today announced the retail launch of NFL Blitz Legends. Featuring remastered versions of the legendary NFL Blitz games that captured the attention of millions of fans during their heyday in the 90’s, NFL Blitz Legends modernizes the gameplay with online competition and leaderboards. Launching during the 2022 NFL season – and in celebration of the 25th anniversary of the original game – NFL Blitz Legends is now available on Arcade1Up.com and in-store and online at select retail partners.

“Partnering with the NFL to modernize the iconic NFL Blitz franchise was a dream come true,” said Scott Bachrach, CEO, Arcade1Up. “We are so pleased with the way this machine came to fruition – from working with the NFL on all aspects of the game and the FGA to ensure the game’s greatest were included, to challenging our in-house team to recreate the legendary 49-way joystick. We can’t wait for both old and new players to experience it.”

“Working with Arcade1Up to revive NFL Blitz allows a new wave of fans to enjoy the iconic franchise while also giving existing fans the chance to experience the classic game they grew to love in the 90s,” said Ed Kiang, VP of Video Gaming at the NFL. “The remastered NFL Blitz Legends gameplay offers fans an authentic football experience brought to life by hundreds of NFL Legends.” 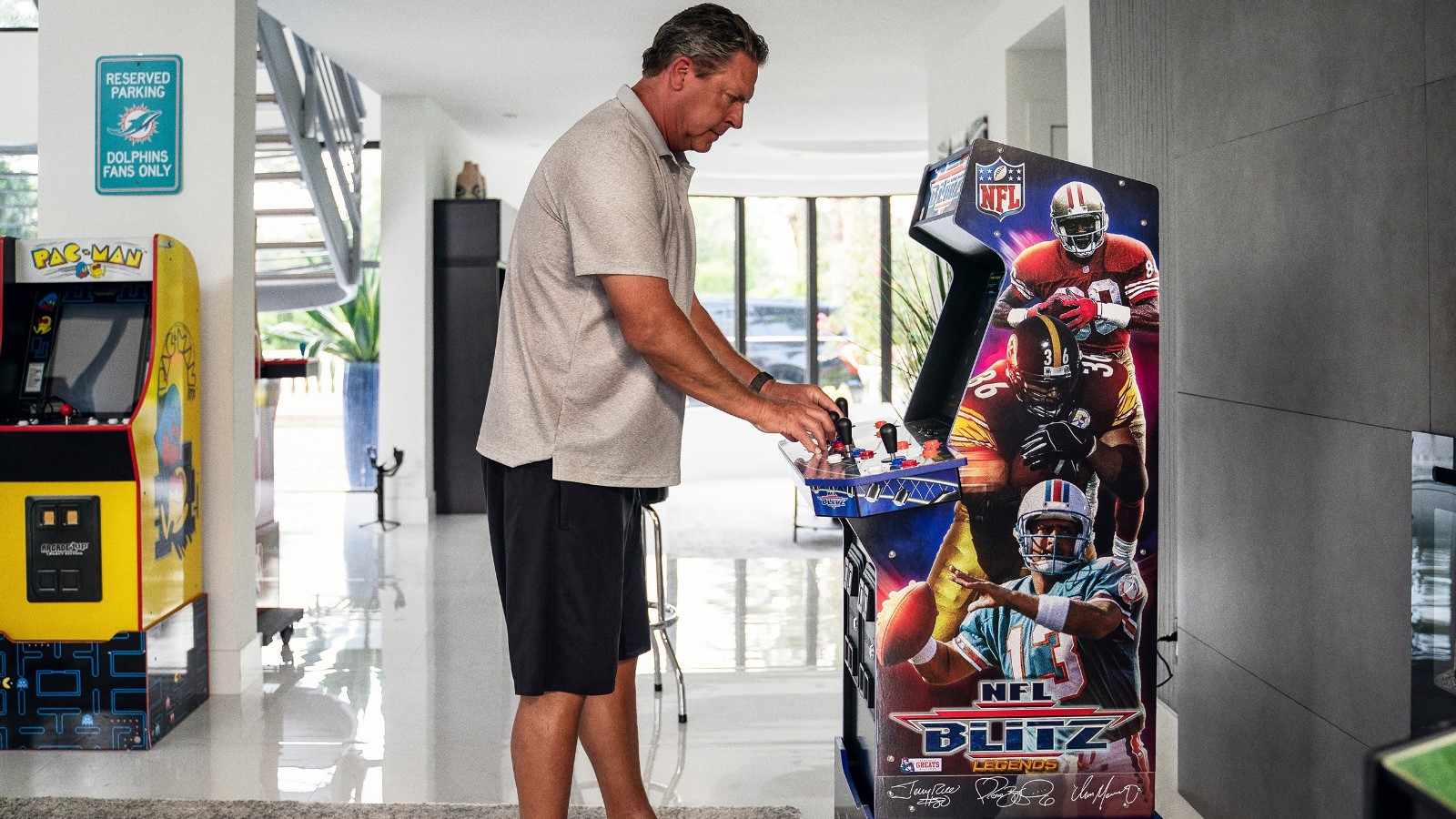 The NFL and Arcade1Up have created a unique arcade machine for the home featuring three of the most popular titles, NFL Blitz, NFL Blitz ‘99 and NFL Blitz 2000: Gold Edition, with the ability for gamers to compete on live leaderboards.

In a first for the Blitz franchise, fans will be able to go head-to-head in NFL Blitz Legends with all-new multiplayer functionality going live in the coming weeks. This cabinet-to-cabinet feature has never been achieved in an NFL Blitz game and brings the gameplay of the original titles to a whole new level. Adding multiplayer functionality, along with other fan-favorite features, to NFL Blitz Legends is sure to appeal to fans new and old.

In celebration of today’s retail launch, Arcade1Up has released some fun facts about NFL Blitz Legends and the iconic series:

*First released as an arcade game in 1997, NFL Blitz quickly became one of the greatest football titles in video game history.
*In celebration of the 25th anniversary of the Blitz franchise, Arcade1Up introduces NFL Blitz Legends – the first home arcade machine and first new entry in the Blitz franchise since 2012 and the one and only Blitz arcade machine equipped with online gameplay and leaderboards so fans can play remotely with friends.
*The game features NFL Legends: Dan Marino, Cris Carter, Jerry Rice, Jerome Bettis, Deion Sanders, Terrell Davis and hundreds more.
*NFL Blitz Legends includes three of the most iconic Blitz titles: NFL Blitz, NFL Blitz ’99 and NFL Blitz 2000: Gold Edition
*Arcade1Up’s NFL Blitz Legends home arcade machine has a 49-way joystick and 17-inch screen with a light-up marquee and comes with a branded riser.

“I love the game of football in any form and video games are definitely something I enjoy in my downtime with friends and family,” said Terrell Davis, NFL Legend and former Denver Broncos running back. “NFL Blitz Legends is bringing football back to the golden era of the 1990’s, and I am honored to be featured alongside many other greats. I can’t wait to compete live to see who’ll come out on top!”

NFL Blitz Legends is available on Arcade1Up.com, BestBuy.com, Walmart.com and Amazon.com and other retail partners for $599.99.