Today, Bandai Namco announced that the RPG Ni no Kuni II: Revenant Kingdom – Prince’s Edition will head to the Nintendo Switch on September 17. The game, previously released on PlayStation 4 and PC, will include the main campaign as well as all previously released DLC. 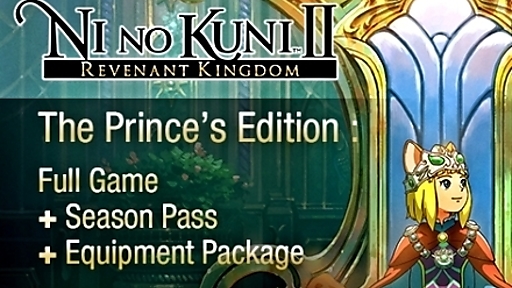 Ni no Kuni II: REVENANT KINGDOM – PRINCE’S EDITION, developed by world-renowned video game studio LEVEL-5 Inc., with participation from the legendary artist Yoshiyuki Momose and music composed by Joe Hisaishi, tells the story of Evan Pettywhisker Tildrum, the young ruler of Ding Dong Dell. Evan is dethroned by a treacherous coup and must rebuild a new kingdom free of strife while uniting the whole world of Ni no Kuni. Across Evan’s grand adventure, players can explore a beautifully crafted world filled with exotic locations, a wide cast of characters to encounter, dangerous foes, and plenty of allies eager to help. Supporting Evan on his adventure are his friends Roland, Tani, Batu, Lofty and a natural phenomena known as the Higgledies. The Higgledies will provide invaluable support during battles including offensive and defensive buffs, increasing special attack power for Evan and his friends, and assist in attacking enemies. There are 100 unique Higgledies to collect, each with its own special powers. Mix and match different combinations of Higgledies during combat to strategically secure the upper hand in battles.

In addition to the full critically acclaimed campaign from the original 2018 release (available now on PlayStation 4 and PC), Ni no Kuni II: REVENANT KINGDOM – PRINCE’S EDITION contains both DLC packs, which includes The Lair of the Lost Lord and Tale of a Timeless Tome, a $25 value.

“The incredible artistry and deft emotional touches of the Ni no Kuni series have made it stand apart from other action RPGs, and we’re happy we can finally let Nintendo Switch fans experience the full breadth of Evan’s adventures on the go and at home,” said Ross Borden, VP of Publishing at BANDAI NAMCO Entertainment America Inc. “Ni no Kuni II: REVENANT KINGDOM – PRINCE’S EDITION tells the story of a kingdom in devastation, and of a group of friends ready to rebuild a kinder and more just world in its wake. We hope that new fans will embrace the game’s charming spirit of friendship and perseverance.”

Check out our review of the original release, and stay tuned for more news here on Gaming Trend.