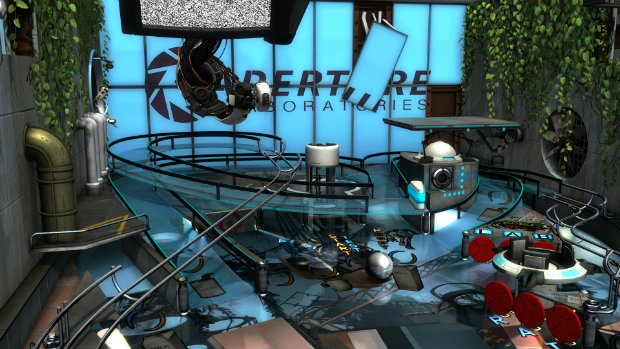 When I saw the first trailer for Portal, my mind broke. I couldn’t comprehend anything that was happening in the video, I just knew that I needed to get my hands on it. When I heard that the team behind some of the best licensed digital pinball tables in history would be collaborating with Valve to make a Portal table, I was thrilled — and though Zen Pinball 2: Portal doesn’t try to change the game as much as I’d hoped a table based on a franchise that literally exploded my brain would, it delivers plenty of fanservice along with some inspired digital pinball bits for the wizards out there.

You won’t be thinking with portals as much as you’ll be hitting ramps, elevators, and occasionally hopping through a pre-placed portal. The table plays more like a Portal homage and less like a piece of the intricate story already laid out by its predecessor. While it would be a tall order to ask a pinball game to expand the universe put forward by Valve’s hit series, I was hoping that the Zen Pinball team would explore it in more depth.

That said, I never got the feeling that the game was a cash-in. The source material has been combed through and all the best bits are present. ATLAS and P-Body help you unlock multiballs, Stephen Merchant and Ellen McLain reprise their roles as Wheatley and Glados with a load of totally new dialogue, and Chell makes her way around the table as you complete goals.

Several of the game’s different missions are genuinely unique. Redirecting lasers through portals by adjusting Discouragement Redirection Cubes with bumpers is inventive. After your ball is locked into an elevator, you can select one of several different missions, and before long you’ll figure out the few that are your favorites. Upon completing every mission, you’ll get into a pretty challenging fight with GlaDOS herself. Sadly, the interesting missions are undercut with generic ramp-hitting exercises. It’s nice to get to skip out on the more generic ones, but their inclusion will leave you wondering why they were even there.

The ball’s movement is just as solid as in any other table by Zen Pinball, except for during the inlaid table section. When the floor opens up to reveal the Ratman’s den, the ball seems to suddenly become lead. Inset tables are often my favorite part of any digital pinball game, but it’s this tiny flaw that makes the exciting reveal of the floor opening up to show off a new playfield that much less thrilling.

The biggest problem with the Portal pinball table is that even though it grasps the tone and atmosphere of the originals well, it can’t capture what makes them so fun. Portal is about exploration and experimentation, and the predictability of the portal gun is at the core of the gameplay. In Zen Pinball’s take, the chaotic nature of pinball replaces that precision with somewhat generic table design and a Portal paint job.

It’s not quite a triumph, but Zen Pinball 2’s Portal table is a stand out in the series’ expansive table list. While there may not be enough meat here to thrill Portal fans with a passing fancy for virtual pinball, it’s definitely a solid choice for anyone who has enjoyed Zen Pinball 2’s other games.

Spencer Campbell has summited many mountains just to shout, “Video games are for nerds!!” After extensive scientific testing, he has concluded that they are. He plans on accepting his Nobel Prize as soon as the dorks in Sweden return his calls.
Related Articles: Zen Pinball 2 - Portal
Share
Tweet
Share
Submit