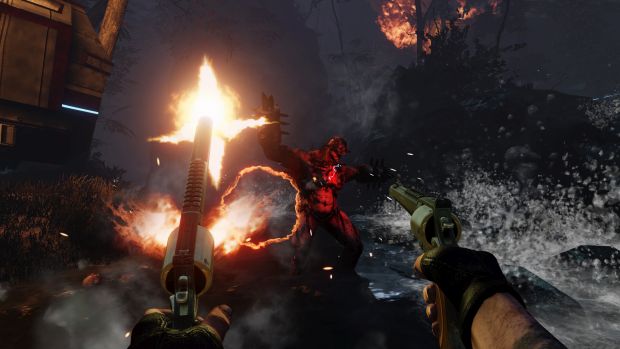 Killing zombies is fun, which is why there are so many games about just that.  Killing Floor 2 is one such game, though it prefers you use the term “Zed,” and it’s an overall great time with friends.  While there are a few areas that could use some polish, and there’s not a lot to keep you coming back for repeated playthroughs, it’s still a lot of fun while it lasts.

The story of Killing Floor 2 is simple, albeit mostly forgettable; an experiment has gone wrong and mutated most of Europe into ravenous undead creatures.  You play as a member of a group of mercenaries, concerned citizens, and other assorted characters sent in to clear them out of several important areas.  While the story is mostly just an excuse to shoot some zombies, there’s still a good variety of fun characters to play as.  My favorites ended up being Mr. Foster, an arrogant man in a gas mask, and Reverend David Alberts, a Scottish priest who can still kick some zombie ass.  While your character choice is cosmetic, and doesn’t affect your class choice, it’s still a nice touch.

You’re gonna be seeing a lot of blood here.

Killing Floor 2 has a pretty simple setup: Zeds spawn in waves, and to complete a round, you must kill all of the Zeds in a wave.  As each round finishes, there’s a brief window of time to refill your weapons,  upgrade your gear, and get ready for the next wave.  Each wave of Zeds gets more difficult, and contains a larger variety of special Zeds, until the final wave, where the players face off against a giant boss.  It’s a good setup for a fun, chaotic time with friends, but it’s kind of a shame that that’s the only real game mode available.  There is a 6 on 6 VS. mode, where the players on the opposing team get to play the special Zeds, but it doesn’t add a whole lot.  You’ll probably play it once or twice before deciding to go back to the standard game mode, because, while the special Zeds are varied, they’re just not that fun to play as.

There are, however, plenty of maps to choose from, and all have a lot of variety.  From old castles to ruined cities to abandoned laboratories, Killing Floor 2 has quite a selection of sights to see, even if most of them will end up covered in gallons of blood and gibs by the time the first wave is over.  The levels also do a good job of forcing you into different strategic locations by changing the supply pods at the end of the round; in order to keep stocked up, you’ll have to go to a different corner of the map, which naturally means you’ll need to be prepared to defend other, more difficult locations.

“Zed Time”, a feature where time slows down to give you time to get headshots, is a great, if familiar, feature.

There’s also a lot of variety in the way of enemies to fight and weapons to use.  Different enemies, such as the Siren or a wave of Crawlers, can lead to quick changes in strategy, while the Fleshpound means you’ll have to temporarily drop everything and deal with the threat at hand.  Each class has strengths and weaknesses against certain Zeds, so be prepared to coordinate with other players on the fly.  There’s also a lot of variety when it comes to weapons, though most players will quickly settle into a specific loadout and progression tree with a little bit of experimentation.

Speaking of the supply pods, the shopkeeper, who gives you “encouragement” through your battle, is a strong contender for this year’s most annoying support character.  No matter how you do, she’ll always have a smug remark to hurl your way.  While there’s a certain amount of fun to be had in a sarcastic support, nothing kills the feeling of accomplishment you feel from a successful playthrough faster than hearing how much better you or your team could have done.

Be warned; Zeds like to get up close and personal.

There’s also not a lot in terms of progression.  At the start of each match, you select a class, which determines your starting loadout, and you gain XP by fulfilling certain conditions based on your class.  For example, berserkers gain XP by killing Zeds at close range, while commandos gain XP by killing Zeds with certain weapons.  As systems go, it’s pretty easy to learn, but it doesn’t pay out rewards very often.  Because of that, I can’t see myself playing this game religiously as other shooters, as it never felt like I was working towards a goal or earning anything for my playtime.

While Killing Floor 2 doesn’t offer a lot of content, especially compared to many other multiplayer shooters out this year, at the end of the day, it’s still fun to shoot some Zeds with your friends.  If you’re really looking for some quick, challenging multiplayer action, Killing Floor 2’s a pretty good place to start.