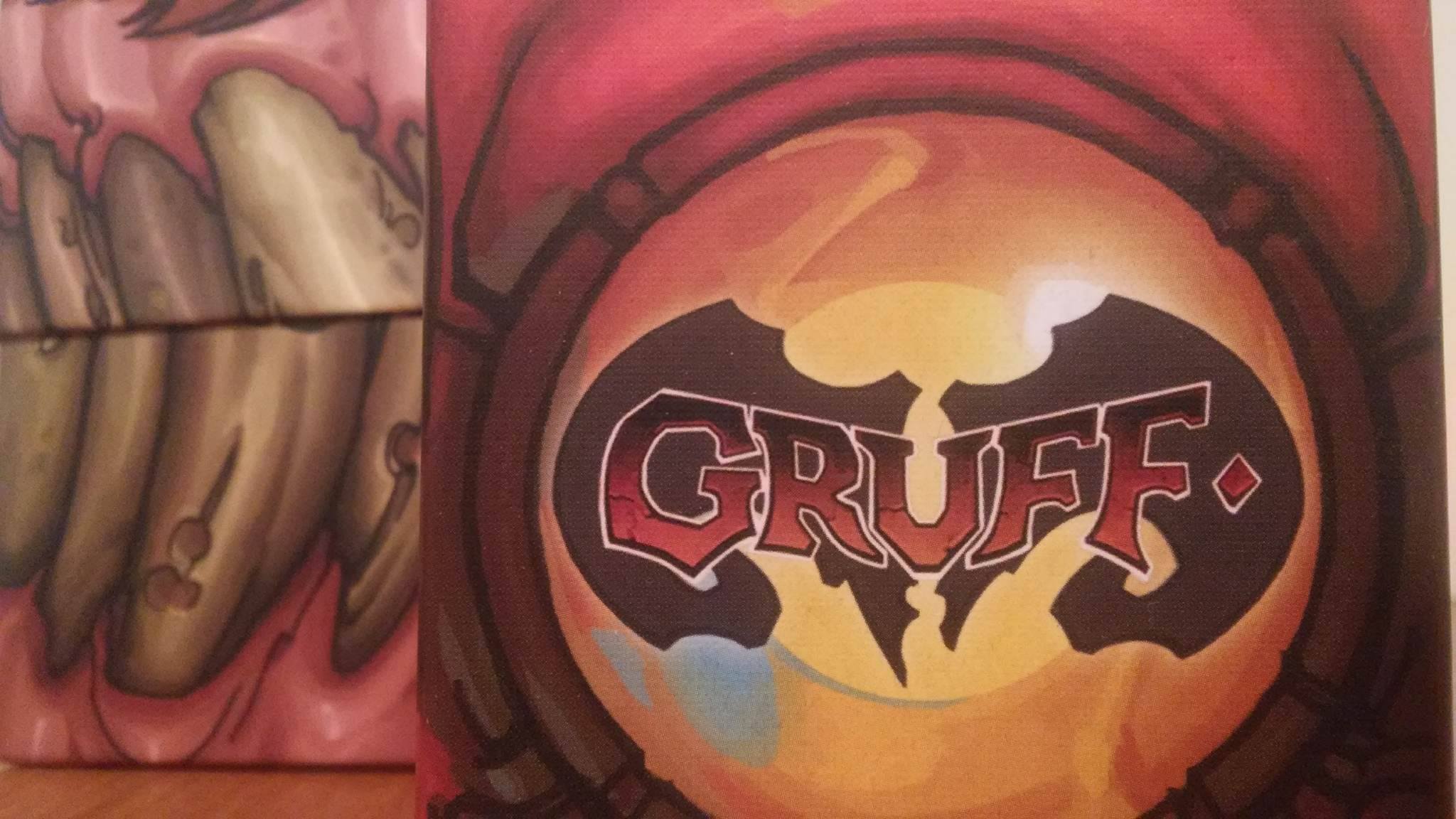 It’s rare to see a new combat card game make such responsible decisions as Gruff. While the two player combat card genre is a crowded field, Gruff’s design sets it apart because of how well it approaches every aspect of gameplay. From graphic design to deck building to playability, you will find immense value in this small product.

Gruff’s setting is inane and weird enough to warm even my tired and dried-out husk of a heart. After the fabled tale of the Billy Goats Gruff, the onlooking shepherds realized they had a mighty force on their hands: their own rough and ornery flocks. They proceeded to use mad science to mutate those strains of goats, weaponizing them into more and more specialized combat units. All the while, those shepherds lost their grip on their sanity, fueling their mad creations as they grew more insane themselves.

The battles between these shepherds play out as they array themselves with three goats. Before you play, you will choose a shepherd and three goats to play with. Each goat has 15 cards, and together these 45 cards make up your deck. Every shepherd has two stats, life and crazy (essentially mana), as well as a special ability. The abilities are, for the most part, a catchup mechanic known as Threshold. When they drop below a certain lifecount, their threshold will trigger and grant them a special bonus.

Choosing which shepherd to use is not a trivial choice, as similar as they may seem at first

The goats have three stats: mean, fat and weird. Mean is damage output, and weird adds to your shepherd’s crazy. Each time a goat gains weird, you add that amount to your shepherd’s crazy count. Fat is a mixture of armor and life, but easier to use than either of those. When your goat would take damage, one of two things happens. Either the damage is equal to or greater than the fat, in which case your goat dies, or it bounces off harmlessly. This method makes for fast play and easy usability in game.

Gameplay is deep and fascinating, while simultaneously accessible. Your turns are made up of simple actions, but crucial ones. Each turn you do three things, beyond the usual cleanup. You activate a goat, tapping it and triggering any abilities that begin when activated. Often these include increasing a relevant stat. You can then play as many cards from your hand as you can afford, and end the round with a Tactical action. This consists of one of the following: Move, Attack, Grow (increase one of the three stats by one), or Resurrect (bring a dead gruff back to life). Choosing when to undertake each action is the real key to the game. Even something as simple as growing your gruff is vastly different, because each one has different stat growths, with different maximums and steps along their stat trees.

Each gruff can only attack one directly in front of it. If there are none, that gruff is free to ram straight into the shepherd. You also have to activate each gruff before you can activate one a second time. What results is a dense and intricate interplay between you and your opponent. You will be balancing stat growth among your units, moving them into and out of position, and combining their abilities together while you play. Much like Ashes: Rise of the Phoenixborn, Gruff is less about the complexity of what you can do as when you should do it. You might have a low cost card to move a gruff out of turn. Do you use that to power up Ol’ Darby, who gets an additional Mean and Weird when moved, or put a fat blocker in the way of an imminent attack? Do you wait until the opponent has declared an attack or use it to create an opening for one of your own?

It’s clear that this focus on timing and positioning is intentional. There are no instants, so everything is down to preparation and response. At the same time, attacks do not resolve on your current turn but your following turn. Your opponent will have a round to see what’s coming, and decide whether to use that turn minimizing the damage or preparing an even more damaging response. Each game runs from around 45 minutes, which is long enough to feel rewarding but short enough to never feel like a chore. That time will leave you feeling like a creative master of strategy, without ever tiring you out.

Deckbuilding consists of choosing your three gruffs, which is a more detailed process than it might sound. Their abilities can often supplement one another in surprising ways. What you find is that the diverse styles and focuses of each gruff, along with their accompanying decks, lead to surprising tactical combinations in play. You can build your decks by grabbing each gruff’s 15 cards, or use the factions to create an even more intricate deck. Given how quickly you can play, deckbuild, and replay, all combined with the fact that this entire game comes in one box, Gruff is an incredible value.

Combining protect with Irritate and Ol’Darby (from an earlier picture), you could boost every one of his stats plus get him in a better position to attack and defend all in the same turn

All of this is tied into one of the best aspects of Gruff: the graphic design. Studio Woe is a team of talented artists with impressive histories between them, and they bring all of that talent directly into Gruff. Each goat has its own personality which comes through to match its playstyle perfectly. Most important is the way each card is designed. The three stats loom large over each card, and the sliders you use to change them make each card’s strengths and weaknesses instantly readable from across the table. This game was designed with an eventual tablet adaptation in mind (which I have been told is still in the works) and it comes through with the card design. Key numbers are clear, and abilities read quickly. You can focus on your strategy and movement instead of learning the cards themselves.

Whether you find wanting an even smaller investment to try Gruff out, or if you end up needing more to supplement your deckbuilding, let me direct you right over to Clash of the Battle Goats, Gruff’s expansion. Clash contains 6 new shepherds, 6 gruffs, and enough ability cards to create two functioning decks. It also has 4 Legendary Gruffs; I’m still unsure what this legendary status actually does, but more gruffs to play with only adds value to the game, without overloading it.

These are some of the cards from the expansion, pictured with this adorable first player marker from the base game

This is not to say the game is completely perfect. The rulebook has some spelling and editing issues that will leave you needing to refer to the website’s FAQ your first few times through the game. Additionally, there’s no card indication on reduction of your shepherd’s crazy stat when you you spend it on other cards, so you may find yourself having to come up with your own way to track how much you have spent and how much you have left once the game gets going. The one real issue relates to the art. I am in love with this character design and this style, and it leads me wishing I could see more of it. Each of a gruff’s cards will have the same art, leaving them visually identical. As your hand grows, you will lose track of which cards are which, and have to reread cards routinely to find out which card you want to play. Asking for an additional few hundred art pieces would be a tall order, but one that would help gameplay run smoothly.

See how this could be an issue mid-game?

Gruff is a tactical goat combat game that makes good on its promise of simple yet deep mechanics. As you buff your goats in an intricate dance of placing, stat growth, and timing, you will never lose track of the strategy. All of this comes in a small yet complete set of packages, which will reward you for your investment and through many repeated plays.

John Farrell is a legal aid attorney specializing in domestic violence, living in West Chester Pennsylvania. You can listen to him travel the weird west as Carrie A. Nation in the Joker's Wild podcast at: https://jokerswildpodcast.weebly.com/
Related Articles: Gruff, Tabletop
Share
Tweet
Share
Submit