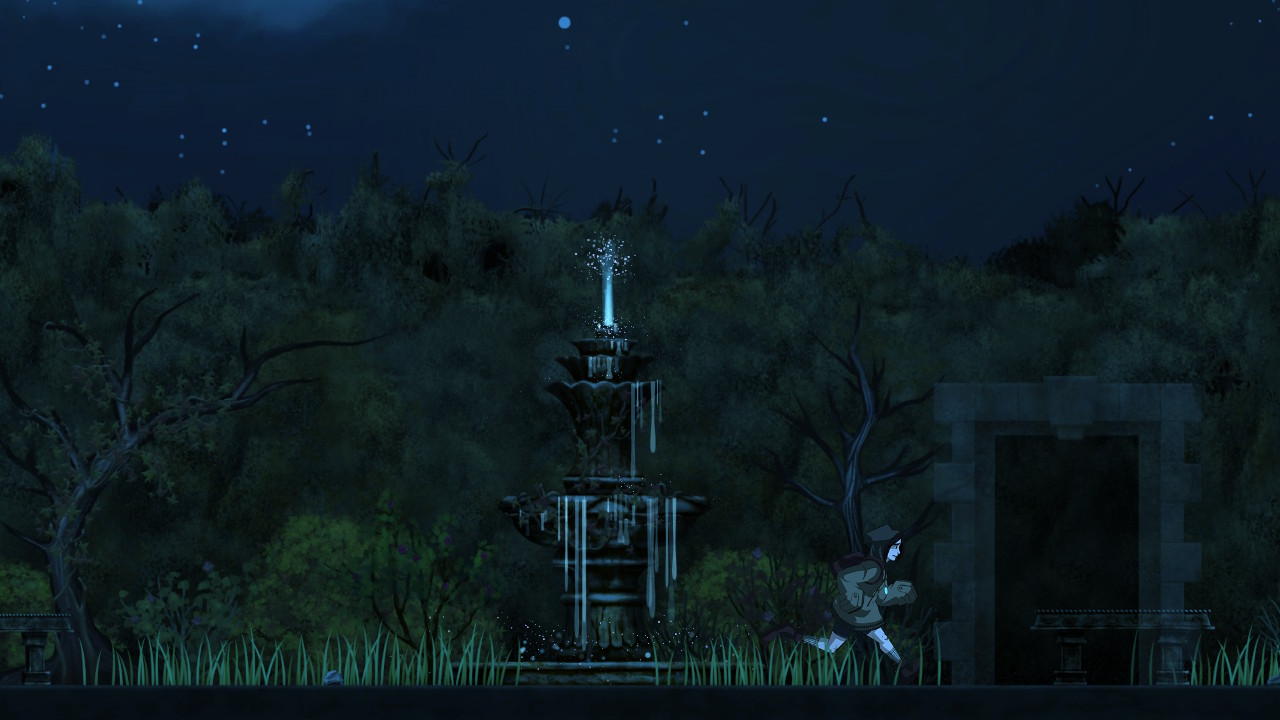 Horror games can be handled in many ways, whether it be focusing on jumpscares, psychological horror, or even just creepy world-building. You may think that a horror game needs to be scary in order to succeed, but that’s not the case. In fact, if the game creates an eerie atmosphere or at least a darker story, I feel that it fits the bill. Whispering Willows aims for the latter and does a good job at doing so.

Whispering Willows is an indie-horror game that follows Elena as she searches for her father at the Willows estate. The game starts as Elena is walking around the estate, and ends up falling into the catacombs where she picks up a mysterious amulet. At first, this amulet seems like a mere trinket, but it actually gives you the ability to access your ghost form. This ghost form is a key part of the gameplay, as it allows you to reach items or tools that you’d be unable to reach otherwise. This is done by possessing the items; sometimes you need to slip through a crack in order to flip a switch and unlock a door, while other times you take control of the item and pull it within reach of Elena. This feature is pretty cool because it plays into the puzzle solving parts of the game. In addition to this, the ghost form makes nearby ghosts visible so that you can talk to them or even spot scorpion-like monsters.

The bulk of the gameplay revolves around exploring the different locations of the estate, talking to ghosts, and solving puzzles in order to progress. The game isn’t linear and allows you to explore anywhere that you have access to whenever you want. Sure, there are certain items that must be found before being able to get to some areas, but once found, you’re free to explore at will. This led me to find some useful items well before I realized what I needed them for. It was incredibly satisfying talking to a ghost who was hinting at an item I needed after I already had it with me. For example, I talked to a woman who mentioned that she left her bucket in the garden, which I ironically had explored and found about 5 minutes prior to this exchange. The chance to find items like this is nice because you can prevent or at least reduce backtracking, which can be annoying in games. That being said, there is some backtracking in the game, but it fits into the story well and doesn’t feel unnecessary.

There aren’t a lot of dangers in Whispering Willows, which is refreshing, although a bit unexpected for a horror game. There are some tree creatures that appear in the garden, along with some scorpion creatures scattered throughout different sections of the game. The first few times you see the scorpions, they can’t harm you and are purely for story-telling purposes. Later on, they are crawling around, and will kill you if they touch you. Except for a few special sections, you can only see these creatures in your ghost form; the latter also applies to the human ghosts. Besides that, you know they’re nearby from a combination of their scurrying noises and the amulet shining red.

The tone of the game feels eerie, but not exactly scary. The questions that you have about what’s happening, why it’s happening, and why you’re the only person around make things creepy. Not to mention the fact that you’re playing as a young girl who only wants to find her father somewhere in this dark, creepy estate. Interacting with some objects will prompt her to spout a line about missing him or how she needs to be brave, which is endearing and also sad, reminding you that she’s facing this alone. The dark atmosphere and shades of blues and oranges add to the darker tone of the story. I won’t spoil anything, but as you search for Elena’s father, you discover the disturbing past of the estate and its residents. This parallel plot made the game even more interesting and made me curious to learn more as time went on.

Whispering Willows took about 3 to 4 hours to complete, which felt like the perfect amount of time for this game. That may seem short, but it seems like the developers knew that any attempt to stretch this story out would only hurt it. Not that I wouldn’t have wanted to have more time with the game, but I’d rather it not overstay its welcome as a result. The $9.99 price tag feels appropriate for the amount of time you get out of this game, and it was time well spent. Getting to go on a dark, ghostly adventure was a treat that I, and Elena, won’t soon forget.

Whispering Willows is a cool little indie horror game that focuses on exploration and puzzle solving. The game isn't necessarily scary, but the parallel story and atmosphere are definitely eerie. The ghost form mechanic is fun, and the game allows you to collect some items early, which is nice as well.

Codi loves to play video games and watch movies. He will watch almost any kind of movie just to experience them. His ideas take inspiration from the shows and movies he watches, and games he plays. He also loves a good pun.
Related Articles: Whispering Willows
Share
Tweet
Share
Submit