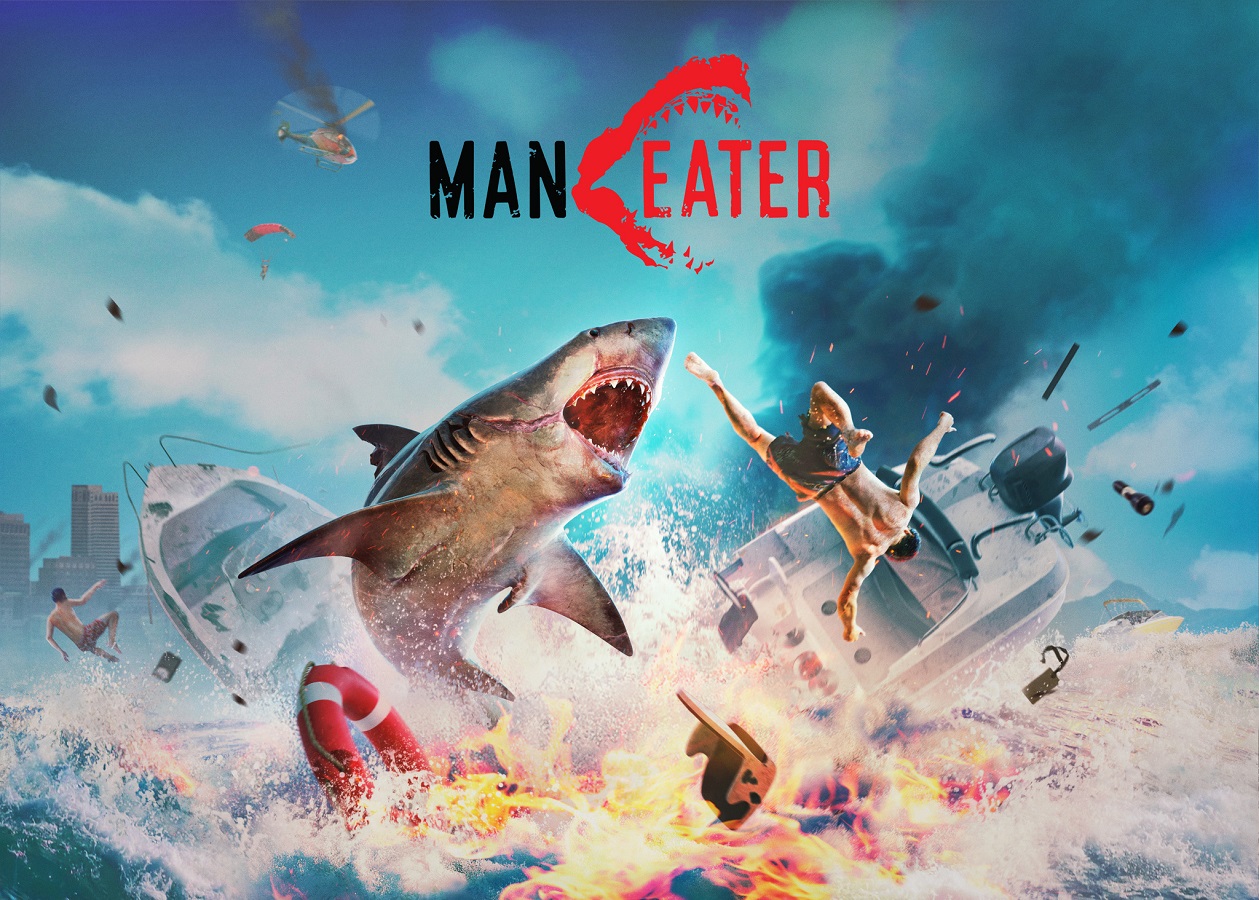 I’m sure I am not alone in this, but I have a bit of a fascination with sharks. I’m not entirely sure where or when that started but there’s no denying that these are magnificent creatures. They are sleek, powerful, graceful and perfectly adapted to survive in our oceans. All that being said, they also creep me out a lot and I am fairly certain that began when I saw the classic movie Jaws at a young age. I may have been many many miles from the nearest coastline, but that didn’t stop me from having second thoughts about getting in the bathtub for some time thereafter. Nowadays I’ll often watch a documentary about sharks if I find a new one and I do enjoy the typical shark movie, even if many of them are pretty bad. One thing those movies normally have in common is that the shark pretty much always gets defeated by some means at the end, blown up, electrocuted and even the Meg couldn’t survive Jason Statham in his submarine and I must confess… sometimes I just want the shark to win.

Maneater, from Tripwire Interactive, is an entirely different kettle of fish (there might well be a few of these puns, so buckle up), this time you ARE the shark and it’s never going to be safe to go back in the water as you tear apart swimmers, boats and other wildlife, terrorizing swamps, coastlines and the deep blue alike. But is Maneater the biggest fish in the pond or just a small fry? Let’s dive in and find out… 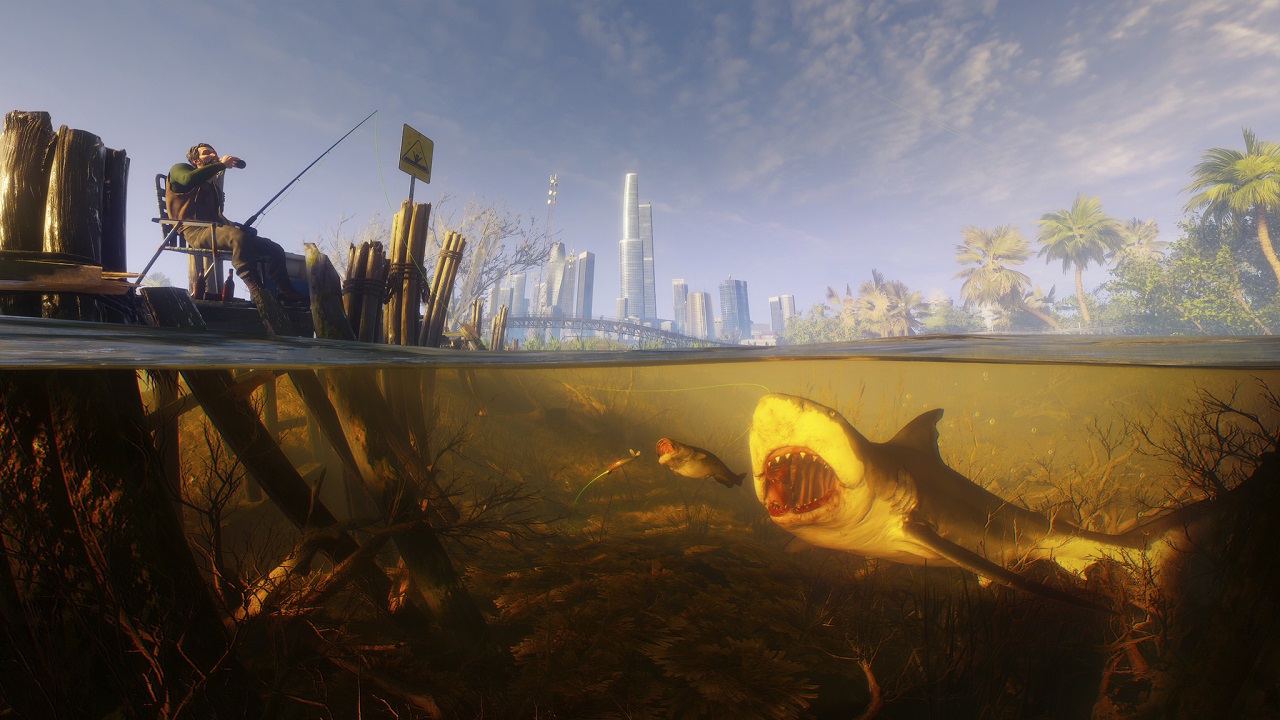 You’re a massive shark and you eat things. It sounds pretty basic and I’ll admit that I wasn’t expecting much from Maneater going into the game. What I found is that while I am indeed a massive shark eating things, there’s a bit more to it than that. Starting off as a big adult Bull Shark, the first ten to fifteen minutes or so played out much as I had expected. I swam about slowly for a while then swam at full speed. I swam in the classic “fin sticking out of the water” position and jumped clear of the waves. I ate some fish and then I thrashed around eating some humans. It was a good time, everybody laughed and then I died. All of a sudden I was hauled out of the water caught by Scaley Pete, the antagonist in Maneater. Turns out that my short-lived, cathartic reign of terror was just the tutorial getting my feet wet with an introduction to the story which really starts right here.

After cutting open his catch, Scaley Pete discovers she is carrying a little baby shark! This would be our shark, hardly even a sardine compared to the mighty shark I had been controlling previously. Pete proceeds to cut a deep scar into our brand new shark pup that’ll remain throughout the rest of the game so that he’d recognize us in future. In response we bite his arm clean off at the elbow before escaping into the swampy water below. Throughout the story of Maneater, we embark on something of a revenge campaign against Scaley Pete, it’s a sort of Moby-Dick story with Pete filling the role of Captain Ahab and the player being the Whale… Just swapped for a shark in this case. 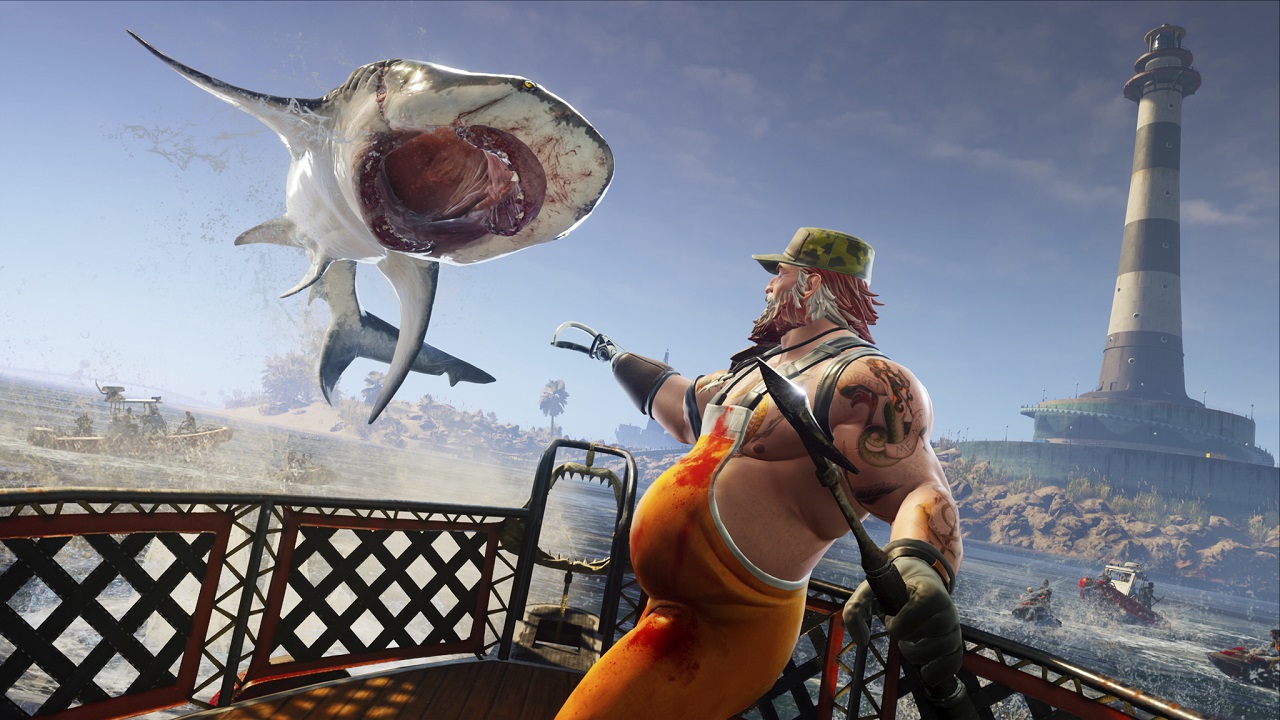 The whole thing is narrated from the perspective of a film crew making a documentary sometimes following Pete and his awkward son, sometimes talking about the life of the shark. It comes together rather well and I actually got pretty interested in Scaley Pete who I had assumed at first was just a mean spirited shark fisherman but later realized there’s more to his character and the dynamic with his son than it seems. Additionally, the voice of the narrator serves up some cheesy but welcome lines of humor as he details the life cycle of our shark. I won’t go into it much more for fear of spoiling, just to say that I was pleasantly surprised at how interested I got in the chain of events and the story serves to keep the game-play moving along at a good pace. You could say that I was reeled in, hook, line and sinker.

The relative safety of the shallow, swampy waters serves as a shark nursery where we can begin to grow but more than that, this little shark has the uncanny ability to evolve and mutate at a rapid pace. You start with only a sonar much like a dolphin would have, allowing you to seek out food and detect dangers as well as reveal nearby hidden items, of which there are many. Later though things get much more exciting, introducing things like Bio-electric teeth that shock prey as you bite into them, bone armor that makes you more dangerous when attacking boats or perhaps you’ll adopt fins that poison things they come into contact with. 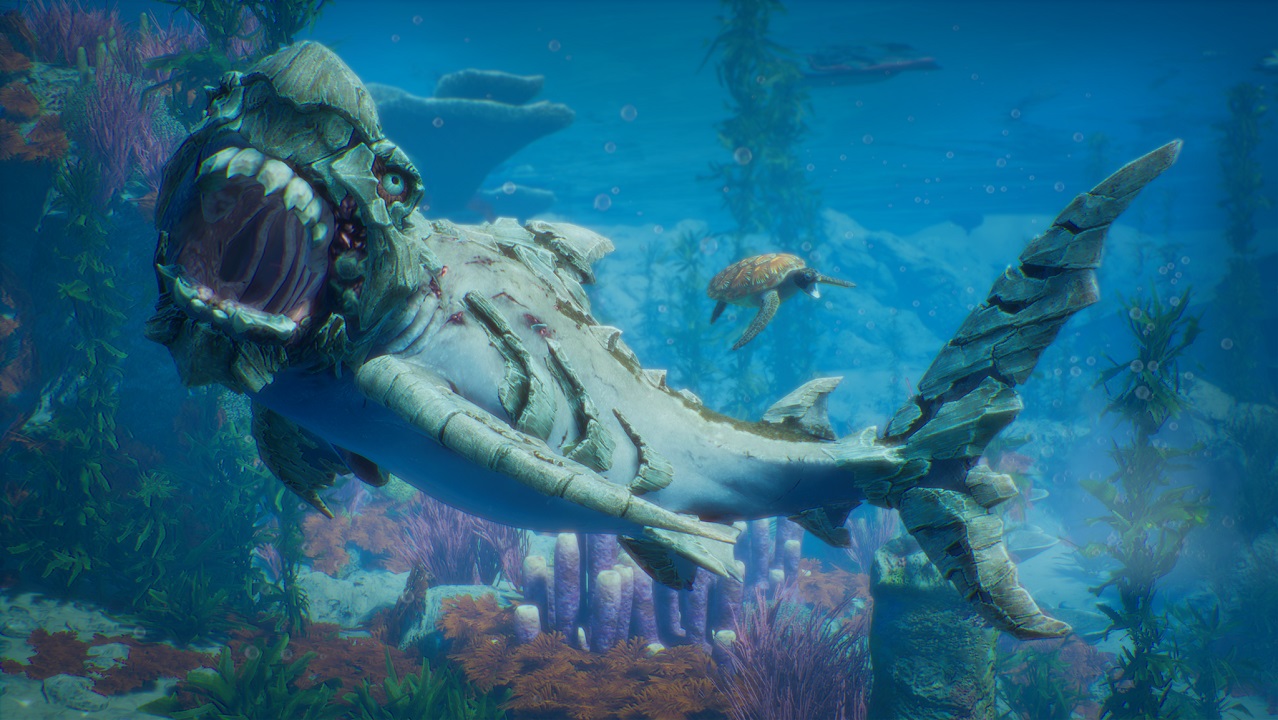 There’s a whole host of new mutations that you can equip when visiting a grotto, one of the game’s safe spaces, mixing and matching different abilities or equipping matching mutations for a set bonus and they can all be upgraded by spending resources gathered from eating different prey and finding hidden items. I found myself partial to using a full set of Bio-electric mutations because… you know… giant electric shark, but different builds suit different tasks better than others. The system gives you something to work towards and keeps the act of “being a shark” fresh, even if at times gathering resources can be a little bit of a grind.

Maneater can be rather colorful and beautiful at times and the act of just swimming around minding your own business is somewhat relaxing, coupled with good sound design for the aquatic environment, particularly when playing through a true 5.1 speaker setup, it’s easy to get immersed in a world beneath the waves. But relaxation isn’t what we’re here for, getting back into the action doesn’t always take place below the surface and you’ll often end up launching onto the shore to choke down a terrified beach-goer or watching a huge shark flopping about on a pier, perhaps while sporting bone armor and emitting lightning and chasing down a bipedal meal, doesn’t get old any time soon. The maps are detailed and different enough to remain fresh as you move from the initial shallow polluted waters of the swamps out into ever deeper areas and there’s little or no loading screens between the various areas, effectively giving you one large map to hunt in, with ever more dangerous threats to combat. 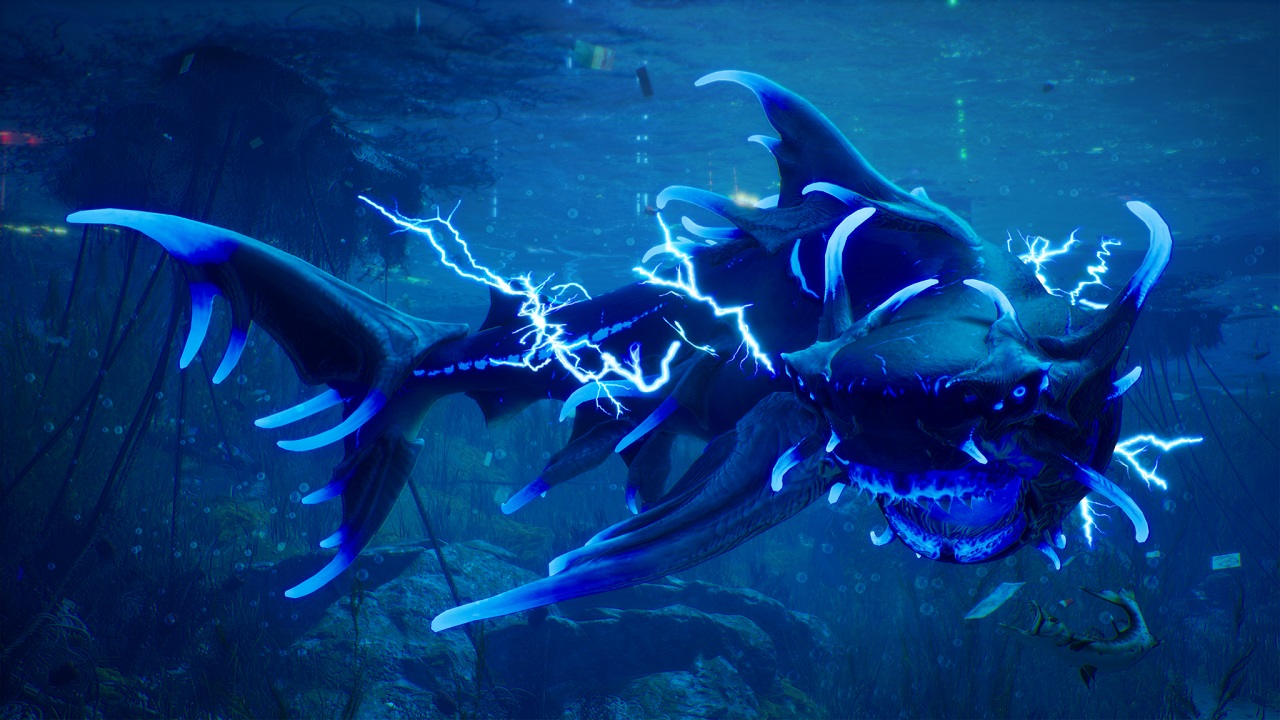 Combat can be a little frustrating when facing either multiple enemies or very fast targets with no way to lock on to any one thing, you can focus on a hostile target but it doesn’t stay hooked on so it can be hard to keep track of the next thing you’re planning to make a meal out of. There’s definitely something fishy going on with that mechanic and on the topic of controls, PC players will probably want to use a controller for this one! Tackling a single target is more of an art though with them being easier to track, letting you time dodges and watch for opportunities to strike. You’ll also have to face off against boats packed full of shark hunters which can be hilarious, launching from the water to land upon the deck of a boat, thrashing around and smashing hunters into the water with a swipe from your tail is cathartic and captures the ferocious nature of a shark attack.

So to wrap this up, Maneater isn’t a deep and thought-provoking experience by any means, but it isn’t setting out to be. It’s supposed to be a fun time as a giant mutant shark causing mayhem and reigning terror and at that thing, it does a fin-tastic job….. Sorry, I’ll get my coat.

Maneater is a fun aquatic adventure with more to keep players engaged than it initially seems, it kept me hooked throughout and has enough daft character to bait me back in for a future play-through. Beautiful to look at, well-paced but chaotic when it needs to be and I had a whale of a time.