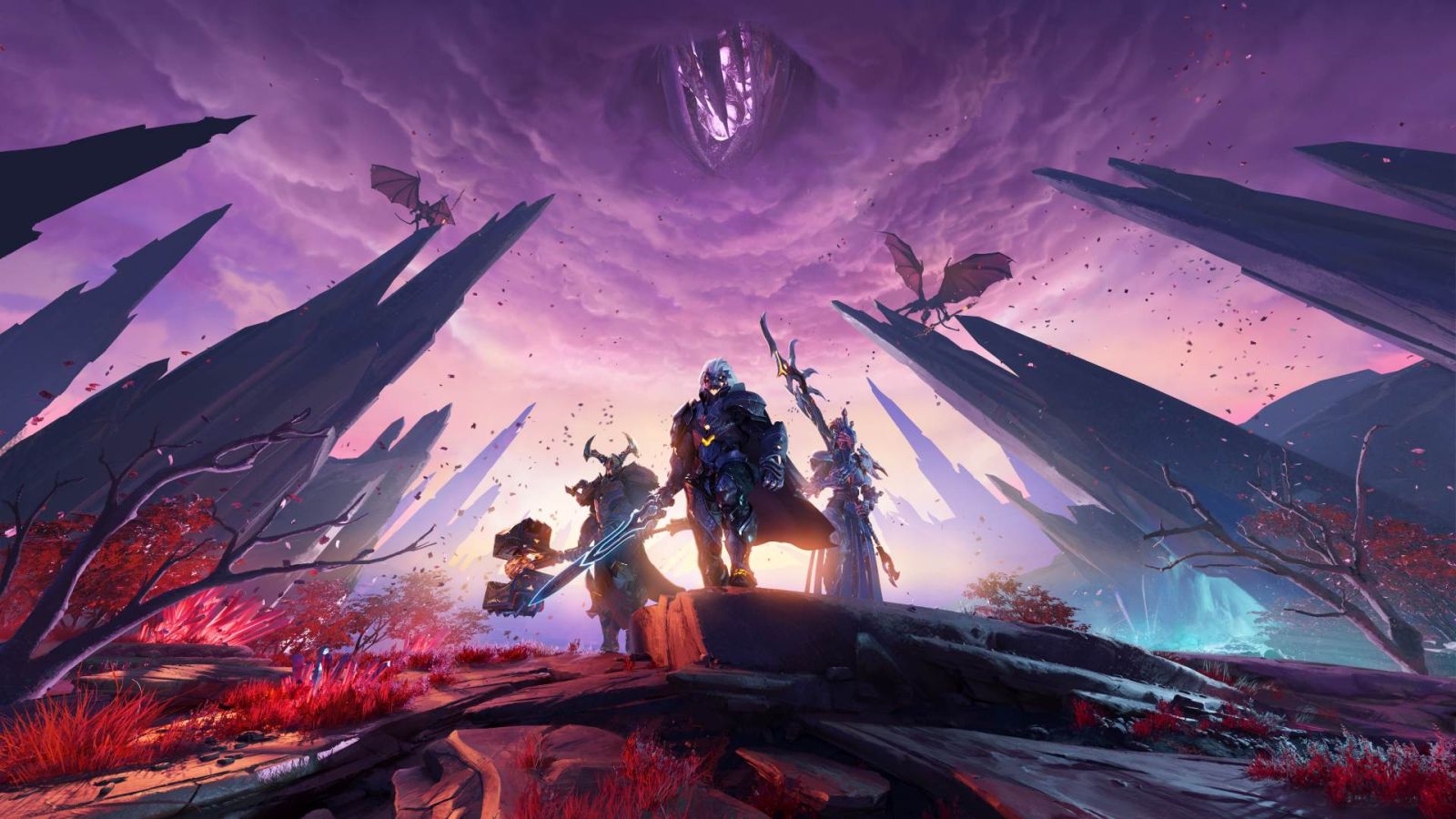 When I reviewed Godfall in November of 2020, I mentioned that it felt like an entire element was missing — a fire world. It turns out, I was right. Whether it was, as I speculated then, a hard launch date for the PlayStation 5, or just that the team hadn’t quite fleshed out their ideas for the world born of ash and flame, but it also seemed to spell one leg of the elemental combat system that got trimmed to make launch. Well, it turns out my prediction was right as this newest expansion, entitled Fire & Darkness, brings the literal heat, but with quite a few new quality of life, tweaks, boss fights, and upgrades that span the entire game. The game is even launching on PlayStation 4 with crossplay enabled, and a fresh matchmaking beta to go along with it. It’s time once again to join the knights of the round in their battle against the mad god Macros. To arms!

The world of Aperion already has some tough denizens to deal with, and even with your most powerful weapons and armor, they are a lot to handle. Now, new foes join the fray, and they seem to be much, much worse. After an absolutely brutal battle in this new Fire realm, we port back to the base only to find it under attack. Moirax, a massive and demonic fire beast emerges as a new threat, easily breaching our home disabling the Seventh Sanctum, casting us aside without even the smallest effort. Cryptically declaring “Kosmera’s cycle must be fulfilled” he leaves, having ripped the essence from the skull of the Seventh Sanctum, leaving both her and you in apparent defeat. I won’t spoil any of the story for you, but suffice it to say that you have a brand new realm to discover with four new story missions, five fresh hunts, an open-ended exploration mission, a dozen new enemy types, and even five bosses to face. This feels like content you’ll be tackling for a while, and with an all-new endgame to face there’s plenty of meat on this bone.

The Lightbringer update brings a whole host of new challenges, but also introduces a new wrinkle — cursed items. As you navigate the various realms in Lightbringer you’ll be tasked with recapturing the Light of the Sanctum back from the forces of the Heart of Darkness. Unfortunately, that Darkness wants to kill you. In fact, merely remaining outside of the scant amount of light cast by the amplifier or the light beacons that you can find dotting the landscape, will slowly kill you. Slaying enemies will cause them to drop light orbs that will push back the countdown a little bit, but only standing in the direct light will halt it or reverse it.

As you and your team push back the darkness, you’ll be given the option to close as many as three Dark Tears — portals ripped in the world that pour forth all manner of foes until they are sealed. When you do, everyone on the team will individually be given a choice. You can press your luck and activate a boon which can give you things like an Epic or Legendary Cursed Item per 10 light levels you’ve accumulated, or perhaps a rare for just 5 light levels, but all of these come at a price. Banes are also applied, and they can be absolutely devastating to your run. On the top end this can be a whopping 50% reduction to all resistances, -40% to Health Recovery, and far worse. It’s a risk/reward that allows you to push the limits of your team, but pushing too hard means you could all perish and lose it all. Gambling eventually catches up with you.

As an optional temptation, there are Caches of Light hidden around the level. Opening these caches will release a bunch of fresh loot, but also will push the Lightbringer level up even higher. Enemies that were your level when you started now might be a full 20 levels higher than you. Coordination can mitigate the level jump, but you can be overwhelmed quickly. The light towers will point the way, but keep in mind that the final fight will be that much harder…but also that much more rewarding.

Once you’ve recovered the Sanctum’s light from these Dark Tears, you must escort it back to the Amplifier. Slowly ambulating through the environment as it floats back to the Amplifier, you’ll have to once again stay in the light to stay alive. If you are getting a similar vibe to the original Pitch Black movie, you are on the right track. Enemies surround you and ambush you from all angles, so fighting as you fall outside the protection offered by the illumination is ill advised.

With the Dark Tear (or Tears) closed, you’ll make your final stand at the Amplifier. During this battle, these Tears re-open, pouring foes at you from three directions. Battling them back once again drops light orbs, but you’ll be facing an overwhelming hoard. Returning the crystals causes a massive burst of light to emerge from the Amplifier, killing that wave of foes. Unfortunately for you, the next wave will be even stronger. And so it goes until you’ve reached the end, culminating in a massive final boss fight before you can claim victory and all that delicious, delicious loot.

Or, optionally you can do what I did and escort the final shard to the Amplifier, trigger it early so it only counts the first two Tears, and then get overwhelmed in the last second and die, leaving all the loot unclaimed. Either way, it’s a hell of a lot of fun, and I can see friends teaming up to see just how far they can push the envelope.

The cursed items you recover in Lightbringer are…well, cursed. I mean, it’s right there in the name. They will deliver some small amount of boon such as increased damage and the like, but they come with several drawbacks as a price tag. If you complete the challenge attached to them, however, it’ll further boost any positive effects while wiping away any negative ones, making them some of the most powerful gear in the game. 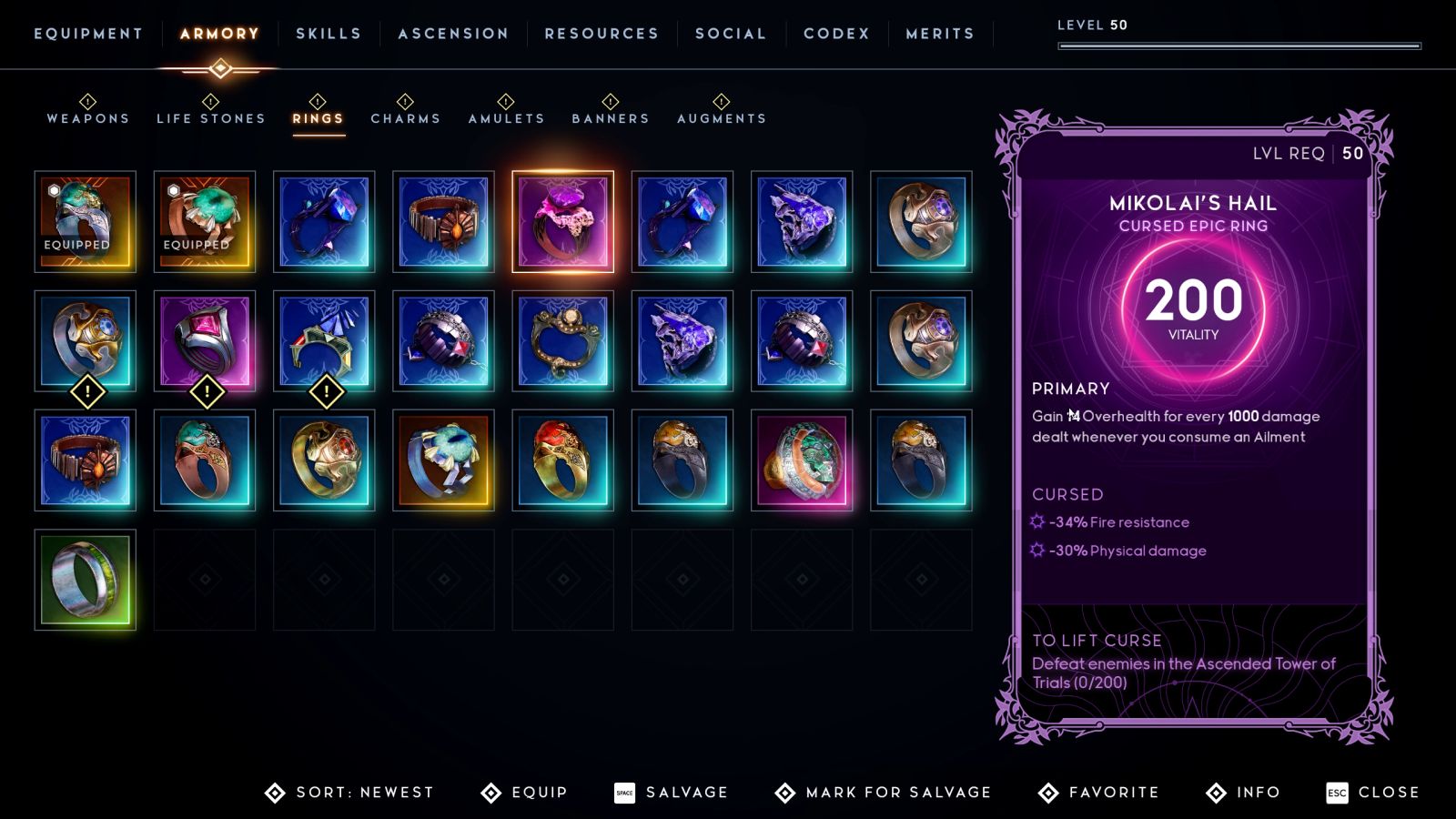 One area where developer Counterplay Games came in a bit light was in the variety of Valorplates — the absolutely awesome armor sets that make you look and feel like an absolute badass from the second you start the game. Well, the team listened and delivered in a big way. There are a whopping 86 new cosmetic skins for your Valorplates, meaning you shouldn’t look like a trio of clones when you set out with your friends. To earn these, you’ll need to achieve specific objectives like completing specific areas, reaching floor 10 of the Ascended Tower of Trials with your chosen Valorplate, perform a Greatsword Weapon Technique 1000 times, Defeat a Level 60+ Gilden Commander in a Dreamstone while you have 3 Banes (yikes!) and to earn the Legendary Valorplate you’ll need to complete a round of Lightbringer with a light level of at least 30. None of these are easy, but they are all very achievable. It’s great to see some new looks for your chosen character, and you’ll certainly earn them. 56 of them are freely available to all players, with 30 of them exclusive to the Godfall: Fire & Darkness expansion.

There are a number of quality of life improvements baked into this expansion, beyond the general bug fixing that has gone on since launch. Enemies scale more appropriately — something I experienced first hand through the Lightbringer mode as foes were always challenging, but not overwhelming based on my ability to apply my skills. Status effects are more clearly communicated, and it’s visually easy to spot an enemy that is, for example, shielded or Elite. If you aren’t using voice communications, there is a new ping system to designate targets, which can be good at higher difficulty levels when you want to call out your targets. The resources you would collect to upgrade equipment is slimmed significantly, making it more clear what you need to bump up your loot from good to better, and better to best. No loot-based game would be complete without more loot, so naturally you’ve got that covered as well. 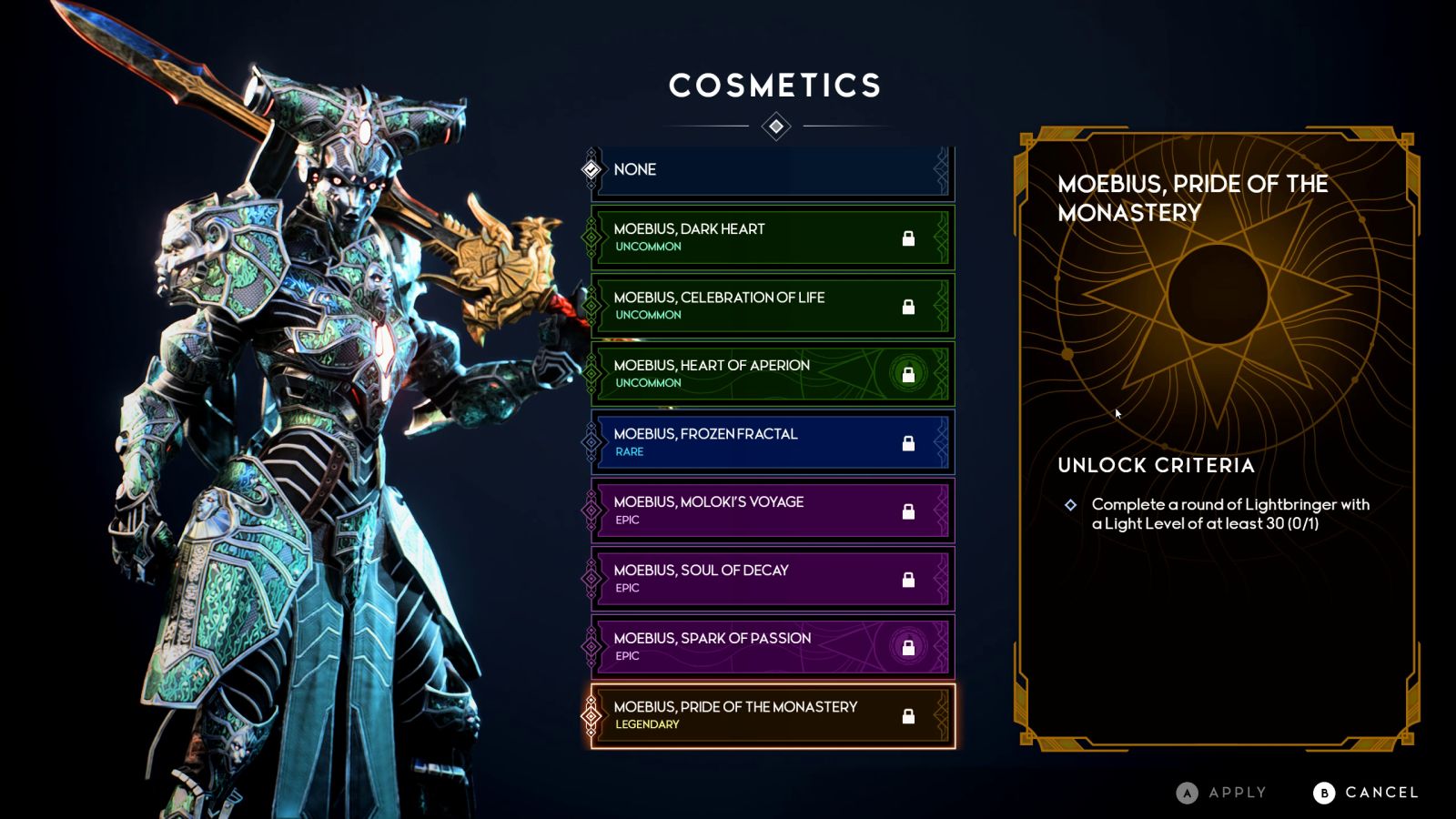 Truthfully, I have only one complaint to levy against Godfall and its newest expansion. The original release suffered from some graphical “hitching” and sometimes very painful rubberbanding. I’m glad to say that the rubberbanding seems to be gone, and the hitching is greatly reduced, but that hitching is still there. You’ll be bashing skulls with your oversized hammer only to have the game hitch for half a second, instantly breaking your immersion and combo timing. I’ve seen it when playing locally with my wife, and during online sessions as well. I’m running on bleeding edge hardware, so it’s unlikely to be that. Here’s to hoping the team can iron out that last hitch.

It would have been very easy to overlook Godfall as a launch game that delivered on most, but not all, of what it promised. It’s easily one of the most beautiful games on the PlayStation 5 and PC, but bugs held it back at launch. With this Fire & Darkness expansion, Godfall finally reaches its potential. It’s as if the team took a fine grit sandpaper to every surface, and then buffed it to a shine. While we’ve not had the chance to try the game on PS4, or test out the new Beta Matchmaking system, the fresh story content and endgame modes give everyone a reason to return to the world of Godfall.

Delivering on the potential of the original launch, the Fire & Darkness expansion for Godfall finally gives us the absolutely gorgeous game we hoped it could be. With a fresh storyline to chew, a new realm to explore, and a massive expansion to the endgame content, Godfall: Fire & Darkness is a must-have.

Ron Burke is the Editor in Chief for Gaming Trend. Currently living in Fort Worth, Texas, Ron is an old-school gamer who enjoys CRPGs, action/adventure, platformers, music games, and has recently gotten into tabletop gaming. Ron is also a fourth degree black belt, with a Master's rank in Matsumura Seito Shōrin-ryū, Moo Duk Kwan Tang Soo Do, Universal Tang Soo Do Alliance, and International Tang Soo Do Federation. He also holds ranks in several other styles in his search to be a well-rounded fighter. Ron has been married to Gaming Trend Editor, Laura Burke, for 21 years. They have three dogs - Pazuzu (Irish Terrier), Atë, and Calliope (both Australian Kelpie/Pit Bull mixes).
Related Articles: Godfall: Fire & Darkness
Share
Tweet
Share
Submit