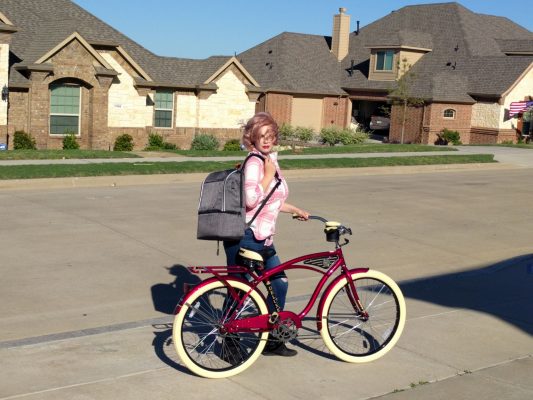 Fresh off their successful Kickstarter campaign, Meltpartners has begun to ship the Udee — an amazing backpack with an odd name. When I first saw the Udee, I thought it looked like a great bag for events like E3, PAX, and Gencon. The padding looked like it’d stand up to the rigors of con life, and the ample space and generous padding should keep my electronics safe. But could a bag so clearly aimed at such a wide audience really hit the mark on all fronts?

The Udee backpack is meant to be versatile, and nowhere is that more apparent than in its feature list. There are nineteen distinct features that are aimed to make it perfect for every occasion, whether indoors, outdoors, or anywhere in between. Let’s start with the outside and work our way in.

The pack is great for biking.

The first thing you’ll notice is that the Udee is no slouch. I mean that quite literally, as it has a semi-rigid structure that holds the shape of the back in its upright state. The color is a charcoal grey with lighter colored silver thread throughout. This makes for an almost denim look, but certainly more chic. Orange accents at the zipper wells and top handhold break up the somewhat monochromatic color palate nicely. Another immediately obvious feature is a strip of reflective surface around the edges of the bag, and a larger pair of strips adorning the outer facing center of both shoulder straps. While these are indeed reflective for things like hiking and night riding, that’s only half the story.

The strips in the shoulder straps are actually red reflective LED lights. Riding a skateboard, bike, motorcycle, or anything that’s easy to miss in the dark is flat out dangerous, but the Udee’s light system makes for an easily spotted and non-obtrusive safety mechanism. Operating the lights is as simple as clicking the bottom of the strap, allowing them to blink quickly, slowly, or stay on continuously. As they are non-integrated, you simply slip them out of their neoprene pouches to plug them into a micro-USB charger. It’d be nice if they did something similar in the rear of the bag, but it’s a great addition just the same.

On the face of the Udee is a large pocket that runs the width of the bag. Inside is a pouch that Udee calls the “Glass Chamber”. Meant to protect things like sun and eyeglasses, or other fragile objects, this pouch into three small sub-pockets. The one meant for scratchable objects has a soft interior, ensuring nothing harsh happens with your lenses. In front of that is an amply sized space for a paper notebook. Adjacent is a space to store pens at the ready, with a clip above it. I’m not sure what the actual purpose of this clip is, but it ended up being where I clipped my car keys for flights to ensure I had them accessible, but out of the way.

A snug fit for my OriginPC laptop, power brick, mouse, and Kindle Fire.

At the rear spine of the bag is the laptop storage section of the Udee. The large space easily accommodates a 15” laptop, sporting the same soft interior as the Glass Chamber mentioned above. Attached to that pouch is a smaller accessories pouch, with an elastic strap to hold your valuables secure. Opposite this section is a pouch for larger accessories, including a zippered portion for smaller goodies like USB sticks, mice, or external hard drives.

Also tucked into this portion of the bag is a braided pigtail-style cable with a Reset-branded three-number carabiner lock. Run through a small reinforced port in the back of the bag, this cable lets you secure the bag and the main zippered parts. My only complaint is the choice of partner — Reset. The lock is sturdy enough, but there’s nothing to stop someone from cutting the cable or lock. Something akin to a Masterlock with an anti-theft alarm for cable cuts would send a more stern warning to would-be thieves — this Reset lock wouldn’t survive a simple crush with a Leatherman. The Udee portion of this equation is perfect — just replace this lock.

The bottom portion of the bag really belies a focus on the camera enthusiast. A highly-padded deep three-chambered space awaits things like camera lenses, extra camera bodies, small portable lighting, and more. It easily handled my Canon Rebel DSLR and two spare lenses with enough room for an external light, extra batteries, color lighting lenses, and with room to spare. Udee bills this out as a portable cooler with expandable space — I’d disagree with that verbal jujitsu, referring to it more as reconfigurable than expandable. As a cooler, it does a decent if unremarkable job.

A metric ton of space in the cooler.

On the sides there are two ports, one the usual rubberized albeit-tighter port, and the other a USB port. If you are wondering why you might need all these ports, let me explain all the ways I used them.

Going to trade shows is an incredible drain on your electronics, and frequently you are paired up with others suffering the same issue. Placing a 20000mah Anker Power Bank inside the bag, hooking it up to the USB port, and running a second one through the other port hole let me charge two external devices at once at high speed — handy when stopped at the press room with the bag in a stationary position. Using a pair of smart headphones (the kind that features buttons for skip, rewind, fast forward, etc.), I could leave my phone tucked away while listening to music — something I found helpful when on my motorcycle. I’m certain there are other functions a person could use if they had access to an external port like this — I’m eager to hear your examples.

The material of the Udee is very durable, and using it for the last few weeks hasn’t changed my mind on that. A lot of the quality look and feel for the bag is due to the reinforced double stitching throughout. The padded shoulder straps end in triangle-darted reinforced stitching that ensures there’s no pull points against the body of the Udee. The padded orange carry handle runs down through the arms of the bag through a reinforced port. This bag will hold up to a lot of abuse with nary a scratch. My only complaint is a small one — I only wish developer Meltpartners had used metal D-rings and shoulder straps adjusters to match the incredible quality of the rest of the build.

Speaking of complaints, most backpacks are painful on your lower back after the first day of a three day conference. The Udee has five large pads in the rear, four against the shoulder blades and just below it, and a large one for the lower back portion. My Dell XPS backpack had a similar configuration and it was the best backpack I’ve ever owned for carrying a laptop, but it was built for a 17” laptop — my current 15” laptop (which puts that XPS to shame) has entirely too much space to move. The Udee holds my laptop and places it higher on my back comfortably — something I can still say after several days of carrying the Udee loaded on my back. This bag is incredibly comfortable.

The pads are perfectly placed for long wear times.

There are two small pouches to the left and right of the large pad that don’t have an initial obvious use. In reality, however, they are privacy pouches. Useful for a wallet, a passport, loose cash, or anything else you’d like to keep out of sight and physically against your body, remaining safe behind your lower back.

The upper half of the Udee has a lot of versatility built in. Beyond the pouches I’ve described, there is a velcro-secured pair of flaps, as well as a smattering of various sizes of net pouches with zippers to secure them. There’s a set of card holders, pen pouches, and a larger pouch for larger implements like a notebook, markers, or a calculator. A feature I’ve never seen in this top section is a zippered floor that leads to the lower chamber of the pack. I’m not sure about the utility of this, other than making the entire area accessible for taller items, but that compartmentalization alone makes this pretty useful.

Given how many features Udee has packed into it, and the durability of the material, I was surprised at just how light it is. I have packs from various gaming events, naturally, as well as some higher end SwissGear and NorthFace packs, as well as my tactical pack from the military. The Udee is the lightest of all of them without sacrificing quality. That said, there’s one area where my other packs have this feature-packed bag beaten — water resistance.

The Udee’s fabric is advertised as waterproof. In practice I found that my goods inside stayed dry, but harder rains might make it through the zippers. Most truly weatherproof hiking bags have a flap over the zipper, preventing any leakage. I’m not in the habit of hanging out in downpour weather with my electronics in tow, but the lack of a flap made me a little nervous.

Comfortable on the shoulder, thanks to the very padded straps

In terms of pricing, the Udee comes in at $109 for an early bird version with no LED strip, tacking on another 10 bucks to add that feature. While the Kickstarter has ended, Indiegogo still remains an open avenue for purchase. Even if you miss the launch window, the price caps out at $129. As production ramps, I can imagine sale prices might appear in the future.

Few packs are this well built, and even less are this comfortable. The Udee works equally well for electronics, photography, or as a hiking pack, and with a degree of quality that it’ll hold up to anything you can throw at it. While not all of the touted 19 features are ultimately necessary, this multi-purpose pack is hard to beat.

Ron Burke is the Editor in Chief for Gaming Trend. Currently living in Fort Worth, Texas, Ron is an old-school gamer who enjoys CRPGs, action/adventure, platformers, music games, and has recently gotten into tabletop gaming. Ron is also a fourth degree black belt, with a Master's rank in Matsumura Seito Shōrin-ryū, Moo Duk Kwan Tang Soo Do, Universal Tang Soo Do Alliance, and International Tang Soo Do Federation. He also holds ranks in several other styles in his search to be a well-rounded fighter. Ron has been married to Gaming Trend Editor, Laura Burke, for 21 years. They have three dogs - Pazuzu (Irish Terrier), Atë, and Calliope (both Australian Kelpie/Pit Bull mixes).
Related Articles: Udee Backpack
Share
Tweet
Share
Submit